In previous years I’ve assembled my annual review solely from album length releases; it’s interesting to note that the vast majority of music I come across, whether I actively discover it or somebody sends it to me for review, is in something resembling album format (notwithstanding that most of it reaches me as a sequence of ones and zeros). However, I do receive EPs and singles, and some of the very best music I’ve heard this year has come my way in shorter releases. It’s clearly time I reflected this in my end of year review, and as it would seem strange to compare two track singles with seventy minute albums, I’ve decided to assemble my favourites in two parts; this also gives me the opportunity to big up more of the incredible musicians whose work has been floating my boat in the last twelve months. The music below covers a rather more limited stylistic terrain than that to be found in Part 1; this is simply a factor of what I’ve been sent. I like jazz, folk, electronica, ambient, free improvisation and a few dozen other styles just as much as I like rock and hip-hop.

At the risk of repeating myself, I make no claims; I simply present the sounds I’ve enjoyed the most. However, I would like to point out that anyone who does make any claims is either stupid or insane: there isn’t time to listen to everything, or more than a tiny fraction of everything released, so it’s impossible to judge what the ‘best’ recordings of the year have been. Distrust anyone who attempts to tell you otherwise. As with Part 1, the short- and longlists appear at the end; the following twelve EPs are my pick of the year.

Bluesy and minor mode heaviness with a ragged edged intensity that’s impossible to ignore. This is music that grabs you by the throat and shakes you. It’s far from one-dimensional however: it’s powerfully atmospheric, has a strong grasp of narrative drama, and exploits the textural potential of its chosen palette to the full. Sludge with melody would be one (wholly inadequate) way of describing this; all I can tell you is that it’s creative, mesmerising, entertaining and generally superb.

The Fierce And The Dead – On VHS (avant-rock)

Textures, atmospheres, driving rhythms and a restless, probing creativity are the main ingredients in this onslaught of instrumental rock innovation. Frequently called prog (and feted in the prog-rock press) TFATD are certainly progressive, but don’t have much to do with the whole dragons-and-choir-pads scene; On VHS juggles various balls tossed their way by hardcore, post-rock and other intense but intelligent regions of the musical firmament, and produces a totally unique sound, making all kinds of complexity very accessible in the process. Mindbending and brilliant. 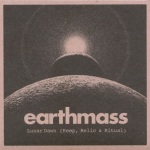 A single epic composition of enveloping majesty and irresistible drama; this is music that evokes geology in its sheer momentum and inertia, as well as in its name. Earthmass pursue their artistic agenda with rigour and imagination, manipulating texture and density with precise, intelligent clarity, and finding ways to speak to specific aspects of experience and feeling that other beers can’t reach. There is so much love of sound in this one beautiful song, so much detail and craft, that it rewards close listening better than most entire albums.

Knifeworld take a collective deep breath at the start of the opening track on this EP: so should you. These three pieces are a whirlwind coach trip through the possibilities of the musical language that is (somewhat tenuously) referred to as ‘rock’; most of the time it sounds solely like itself however, with its discursive woodwind scoring, its rhythmic inversions and convolutions, its engaging harmonised melodies, its imaginative and original lyrics, its tonal but unpredictable harmonic materials, and its totally coherent creative vision. Never odd for the sake of novelty, this is music that is utterly devoid of cliché, and is forged from language with the specificity to evoke the truly particular in its listeners’ own experience. Which is, in my view, what art is for. This is the real deal. You won’t hear better. 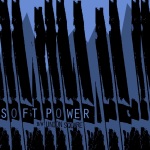 This is really straightforward in many ways: no unduly weird harmonies, extreme rhythmic forms or extreme textures are required. James Beaudreau is capable of bringing this well established set of musical materials into his world and transforming them with such creativity, and such a well tuned ear for musical beauty that he needs nothing more. Melody, texture, dynamic narrative, and heart-wrenching instrumental performance are perfectly balanced in the arrangements; it’s impossible to say what the formula is, but Beaudreau hits precisely the right resonant frequency to make these two short instrumental pieces some of the best music I’ve heard.

Carry The Fire is a celebration of creative dedication, a song about the sense of total necessity  someof us feel about making art, and the many trials and tribulations we face as a result. It’s presented in a stylistically unique and very accessible fusion of hip-hop, indie rock and funk, as is the slightly more hooky and energetic B side, Out In The Rain. There are also two excellent remixes of the title tune. This is music designed to entertain, and it does a superb job of it, without any pretensions, and without any compromises on artistic integrity. Great writing, spot-on arrangement and production, and top whack performances.

A spectacularly well-realised first person perspective on the insane world we live in; this is a dark, jaundiced, perceptive journey through the experience of wage slavery and consumption that we all face, but the reality of which few of us care to confront. Such a vision can only be effectively presented with a rigorous approach to language, and the language (musical and lyrical) of Unexpected Item In Bagging Area is the perfect medium for its message. The delivery is charismatic and appropriately angry, the words have a dark materiality, and the whole utterance has huge clarity and coherence; a brilliant, shadowy contusion of dysphoria that wears its achievement lightly. 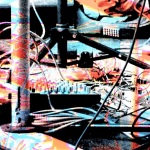 There’s a limit to what words can tell you about music, and I’m not about to get into one of my trademark contextual digressions here: the things I’m going to say about Tonochrome (that they make use of unusual or re-purposed musical materials, that they are very creative and original, that their lyrics are out of the usual way of rock lyrics, that in spite of these things they are very accessible) are things that I have said about other artists in this list. If you want to know in what way they are different and unique, you’ll have to listen; suffice it to say that they make magnificent and distinctive music, and that I like this EP a lot.

Three Thrones is an immensely enjoyable debut from a band that focusses so purposefully on the joy of riff that they almost forget to take credit for the sound they make. Straight time signatures, tonal harmonies, repeated ostinatos, restrained playing, no vocals; nothing in short to distract the listener from the main event, which is the sound of an electric guitar trio playing riffs. Incredibly solid, grounded music that is an essay in sincerity and texture; the EPs cover illustration sums it up perfectly, with its three empty seats dwarfed by the huge utterance looming over them. Excellent and generous music. 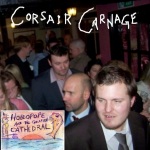 This is about as avant as any of the music in this list gets. Rhythmically angular, texturally and dynamically varied, melodically strange, sometimes downright dissonant, formally inventive, and generally speaking extremely mental. Sometimes this music is odd for the sake of being odd, and why not? The strange and disturbing in art strikes harmonics in the human heart that can’t be set twanging by other means; there’s a definite element of absurdist humour in Corsair Carnage, and combined with the almost unfeasibly imaginative writing and the superb musicianship, it makes for a very satisfying listening experience. I’m running out of superlatives in the course of this article, so I’m just going to call this superlative. 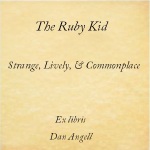 I’ve not heard this EP enough yet to really get to the bottom of it; I’ve received it for review, and not yet written the review, but I’ve heard it enough to know that it’s utterly superb. The Ruby Kid is as active in the world of spoken word as in the world of rap, and this EP’s lyrical statements are pretty much performance poetry that just happens to flow like hip-hop. At the end of the day, with work like this, it doesn’t matter what you call it anyway; the words are engaged with the whole breadth of human experience, the personal and the political shown in their true light as two ways of looking at the same thing, and language as the soup in which they swim. The beats are really ace as well. What can I say? Serious and highly accomplished art.

Rhythmic electronic sounds and audaciously dramatic vocals; the musical materials are partly the sort of thing you might find in the EPs listed above as ‘avant-rock’, and partly the sort of thing that I (in my colossal ignorance) would refer to as middle-eastern pop. Oh, and there’s an element of 80s British pop funk too. The timbres and textures are a matter of constant evolution and great creativity, and the arrangements are realised with a combination of sequencing and live playing (as far as I can tell). There’s some nice phat synth bass, and some nice grinding rock bass; ditto the other elements. Don’t make predictions and you won’t be disappointed, but however you take it, you’re liable to be surprised. This is proper gnarly shit, yeah?