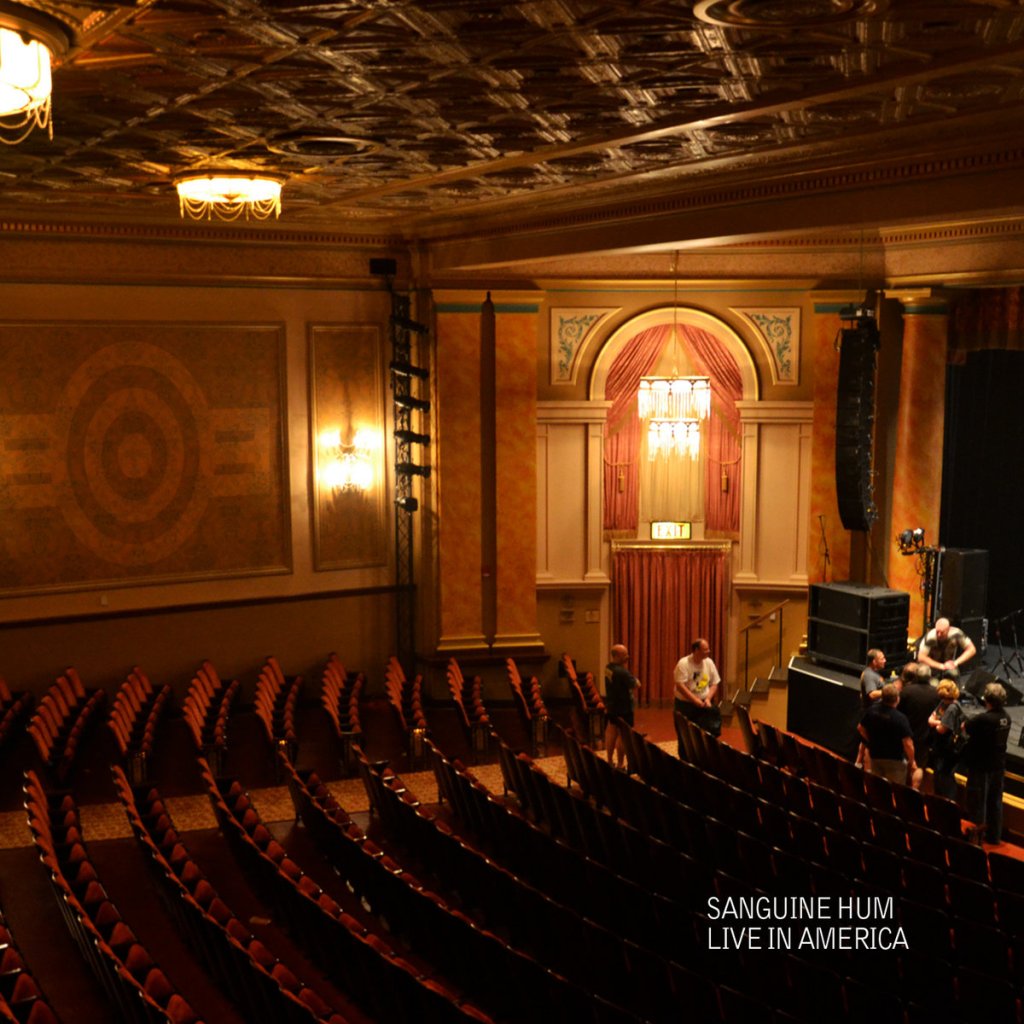 If you read their website bio, Sanguine Hum have a convoluted creative background, balancing a wide range of interests and demands. A need to experiment, a commitment to accessible, melodic songwriting, an interest in ambient abstraction… somehow it all came together in time for their first full-length release in a way that sounded completely coherent. This live recording from 2012 was made at a single date shortly before recording their second studio album, and it shows just how disciplined they’d been in refining that formula: it’s one thing to assemble and construct an ambitious studio record, but it’s another to realise it in front of an audience.

If you work backwards in your imagination from the sound on Live In America, you might not come up with the principal elements that the band own up to in their bio, which is to the good, in my view—it shows how thoroughly they digested their influences. The approach they ended up with has been embraced by elements of the progressive-rock listening community, but it’s a long way from the hard-rock-plus-synths-and-cleverness formula that still dominates that genre. They gigged it here with a very consistent orchestration combining warmly distorted guitar, a hefty, sinewy bass sound, natural drums, electric piano and organ, and synths deployed subtly to create atmosphere and texture, or to thicken up the ensemble when they get loud. The overall texture is close to fusion, and although the vocabulary is clearly rock, there is also a fusion feel to the way that lines and riffs are woven together in their arrangements.

The arrangements are not conceived as scaffolds for displays of virtuosity, although there’s some decidedly tasty playing on display, from all quarters. Even their jazziest guitar solos and most inventively angular riffs relate to the vocal sections as closely as the pre-chorus in a Brill Building pop-song. These songs are all about their atmospheres, and could almost be taken as a polemic in favour of the idea that putting ambience first doesn’t have to mean swamping everything with washes of colour, or eliminating groove and drive. Harmony, melody and lyrics all work in lockstep with the dynamic narratives to produce feelings that connect the songs to each other, making this whole performance into an album in the same way that chapters make a novel.

What the songs put me in mind of, rather than any other musical works, are the quietly contemplative comic books of Jon McNaught: pages from his book Dockwood, in particular, a meditation on the feeling of autumn in an English suburb, appeared vividly to my mind’s eye on listening to a track like ‘Nothing Between Us’. This essentially gentle and warmly melancholic feeling is present, not only in the many quiet and lyrical passages, but even when the band gets loud and heavy. This is abetted by the quotidian lyrical themes, that value ‘double egg with chips and beans’ as highly as they do ‘copper beech leaves’ or ‘a darkening cloud’.

A lot of live albums are culled from the dates of an entire tour—it’s no mean feat to play a single show at which as many complex arrangements as this come off without a hitch, and all with a good enough feel to release them. This is a band that really looks after business (or at least they did eight years ago), and for the listener there’s no need to compromise on the combination of pleasures—I got maximum nerdy joy from listening to the band’s musicianship, without ever having to ‘forgive’ them a self-indulgent moment. This is a cake you can have and eat. Live In America is a fully realised, rigorously integrated, completely ‘finished’ work, with a rare degree of creative maturity. The excitement of listening to it is undiminished after months of heavy rotation.