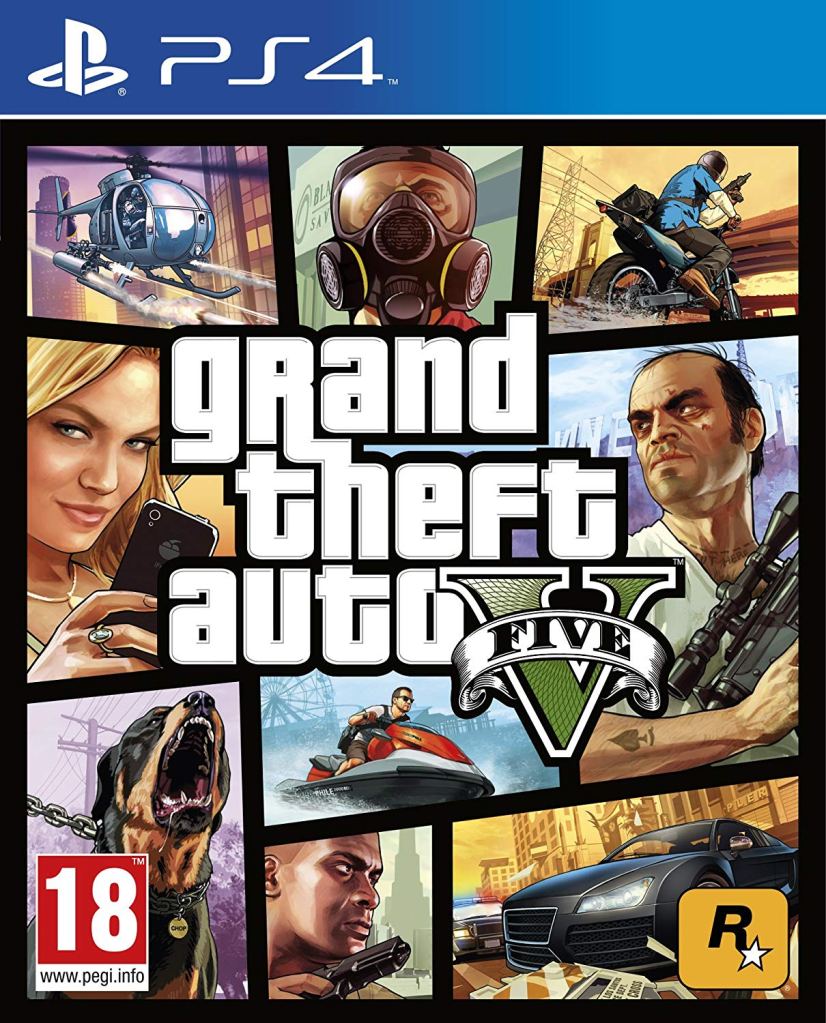 The title of this essay is obviously a misnomer. Los Santos, the fictional city in which Grand Theft Auto V is set, does not operate ecologically. The Foothills, The Plains of Id, Autopia and Surfurbia are all here in image, but the drivers and pedestrians that populate them so convincingly are connected to no social or economic networks, and for all that it is occasionally cloudy or raining in this version of Southern California, there is no weather, no climate, no biology—just whatever decorative eidolons of plants, animals and meteorology are required to make the ludic domain mimetic. Los Santos is the image of a primary world city, specifically of a city that has elevated the image to previously undreamed levels of glamour and persuasive power, a city which would probably like to be an image in fact, but which cannot escape the ecologies that constitute it—economic, social, technological, and biological.

Trying to tease apart the different ways in which Los Santos and Los Angeles are constituted offers opportunities to learn about both real and virtual cities. If any site can be identified as the source of an increasing virtualisation of the real, it is Los Angeles. Places which are encountered only through their optical impact on the windows of a car have arguably migrated from the picturesque (if they are picturesque) to the literally pictorial—and that mode of experience in the material environment has proliferated from the ground zero of Los Angeles which my grandfather Reyner Banham wrote about in 1970, to characterise the life of the auto-mobile citizen in any developed country. GTA V is visually very compelling when the player-character is walking its streets, but it is something else when they are driving. In this sense, of places seen only from cars, it becomes hard to understand or to explain the ways in which Los Santos is less real than the Los Angeles of the primary world.

Banham’s 1970 book, Los Angeles: the architecture of four ecologies, in which he named the four regions mentioned above, remains one of the best-regarded books on the city, for all that it seems blind to LA’s darker side—a side which is clearly important to GTA V’s version. It’s sufficiently difficult to ignore the book, if you are researching the city, that Rockstar Games accorded Banham the accolade of naming a canyon after him, in San Andreas state, to the north of Los Santos. It afforded a strange sensation, driving through Banham Canyon Drive, in such a convincing visual analogue of places in California that Banham drove me when I was a child. I have never experienced California from behind the wheel of a car—the last time I was there, I was that peculiarly European thing, an adult non-driver. But now I have experienced a hyper-real version of LA in exactly the way that Banham argued was necessary in order to read that city.

One of Banham’s more memorable turns of phrase came when he claimed to have learned to drive ‘in order to read Los Angeles in the original’. Although he has a great deal of time for the modernist domestic buildings that are to be found in the city, he locates its great monumental architecture in structures that most critics would have dismissed as infrastructure: the freeways. He also notes that the aesthetic of those structures is to be apprehended through movement, through driving, through traversing them rather than staring at them. This, I would suggest, is precisely how Leslie Benzies and Imran Sarwar designed the cityscape of Los Santos. Get behind the wheel of a car—easy enough when the game’s entire eponymous process is compressed into a single button press—and take off, easing through streets and freeways subtly enlarged and calmed so that you can hare around more or less anywhere without coming a cropper too often.

There are lots of things to do in the game, lots of missions and heists, lots of fights to get into and pursuers to evade, lots of diversions like golf and darts, but it is the core mechanic of driving, and the perfectly balanced environment that you do it in, that ties the game together. Whatever you’re doing, you’ll drive to it, and the scenery will whizz past in a series of imagistic, brightly-coloured vignettes. If a real Angeleno stops their car, they can open the door to the convenience stores they’re driving past, they can hunker down on the sidewalk and touch the grit with their fingers, they can smell the exhaust fumes, the street food and the dogshit. But for the most part, they don’t. I’ve never been to LA as an adult, but I’ve lived the auto-mobile life in rural Britain, and in important ways that is a similar experience. What this game absolutely nails is that experience of a world that emerges from traversal, of the compressed and elided distances between the things that you do, of the experience of isolated motility as an end and a pleasure in its own right.

In the ‘real ‘ world that motility is often a substitute for the agency that is missing from life, and another substitute is to be found in playing video games, so it’s not surprising that contrast is not quite present in the game. But in a striking reinforcement of the psychic experience of the vehicle-bound commute, it’s the journey that feels real. In the game, the work at the end of the journey is some kind of power-fantasy, in which consequence-free violence plays out like the unlimited world-food buffet in a Las Vegas casino. In the ‘real’ what plays out is likely to be an unsatisfactory working and domestic life in which every core assumption feels disconnected and arbitrary. In both cases, driving is an opportunity to connect to the reassuring, grounding verities of a well-laid road and a responsive, reliable machine.

Released just before the latest generation of games consoles, GTA V still looks sharp and impressive. On its release it was jaw-dropping. I know this because, unable to play the game on my Apple laptop, I saw jaws drop all around me, as console-owning friends began to explore its vast and inviting open world. The sheer openness of its setting, in which you can simply ignore the narrative for hours on end, was something unprecedented, and having played more recent games such as Red Dead Redemption 2, it’s clear that there has been no step-change to supersede it. This is a game which is built with playability in mind, challenging the player gently and gradually, and easing their progress through the setting and the story, both of which feel more important than the mechanics of playing.

The story is the kind of crime caper that’s only become possible in the post-Tarantino cinemascape, in which the explicit violence once associated with cinematic realism is redeployed as slapstick. The entire game is satirical in intent, with the only vaguely serious character, Franklin, acting as a straight-man in scenes in which his two co-conspirators bicker like a married couple. So it’s not a game that’s going to move you to tears, or even make you feel overly invested in any of its three playable characters, although all are very entertaining in their own way. The voice-acting and motion capture are both of a very high standard, and most players will find themselves hanging on every word of some of the hilarious conversations—particularly those between Franklin and his homie Lamar.

GTA V has come in for a good deal of criticism, particularly for its misogyny. All visually mimetic games tend to spawn a lot of YouTube content, and similar outrage was apparent when players started posting Red Dead Redemption 2 footage in which they terrified and murdered women. The difference between these two Rockstar games is that while the player is free to terrorise and brutalise any bystander in the virtual world, the story in RDR2 has strong and detailed women characters, who are represented in a way that is faithful to their own perspective. GTA V is conversely a very male world, in which women are ancillary to men, and are satirised in ways that stigmatise them for behaving as a male world demands. None of the narcissistic, avaricious and irresponsible main characters come out well, but women are presented as particularly air-headed, materialistic and superficial creatures. The only game mechanics that allow players to interact directly with women involve either tennis or prostitution.

In this, of course, the game is little different from mainstream television or cinema, but times are changing, and even the few years that have elapsed since this game’s 2013 release have made its approach look pretty backward. There is an ongoing skit in homage to The Sopranos, in which the playable character Michael has a series of therapy sessions, and struggles to maintain his relationship with his wife. Again, the big difference between GTA V’s version and The Sopranos is that in the TV series, women are fully realised characters, shown struggling to achieve wellbeing and fulfilment in a patriarchal society, whereas in the game, they’re a joke. Arguably, so are the men, but at least they get to drive cars and shoot shit.

The openness of a virtual world is always an illusion—kind of like free will, huh? Los Santos has boundaries, and the freeways do not transect them, bringing drivers back around in an inescapable loop. Similarly, although the player is apparently free to go anywhere and do anything they like, there are hard limits on the things that they can do, and from a role-playing perspective, there are not really any moral choices on offer. You can either rob and kill, or you can do nothing—although the mini-games are actually good enough that that might be a rewarding way to spend your time. One of my favourite aspects of the game is tennis, which is wonderfully enhanced by the foul-mouthed reactions of the players, and other sports or vehicle racing activities are very well-realised. However, spending too much time in a game world that so resembles the real, but that is so circumscribed, can end up feeling like some kind of Lynchian vision of hell. Actually, I’m not sure that isn’t how a lot of people feel about LA, so maybe the game’s limitations aren’t a fault—but I’m pretty sure that Los Santos, like Los Angeles, is best appreciated by moving through it.