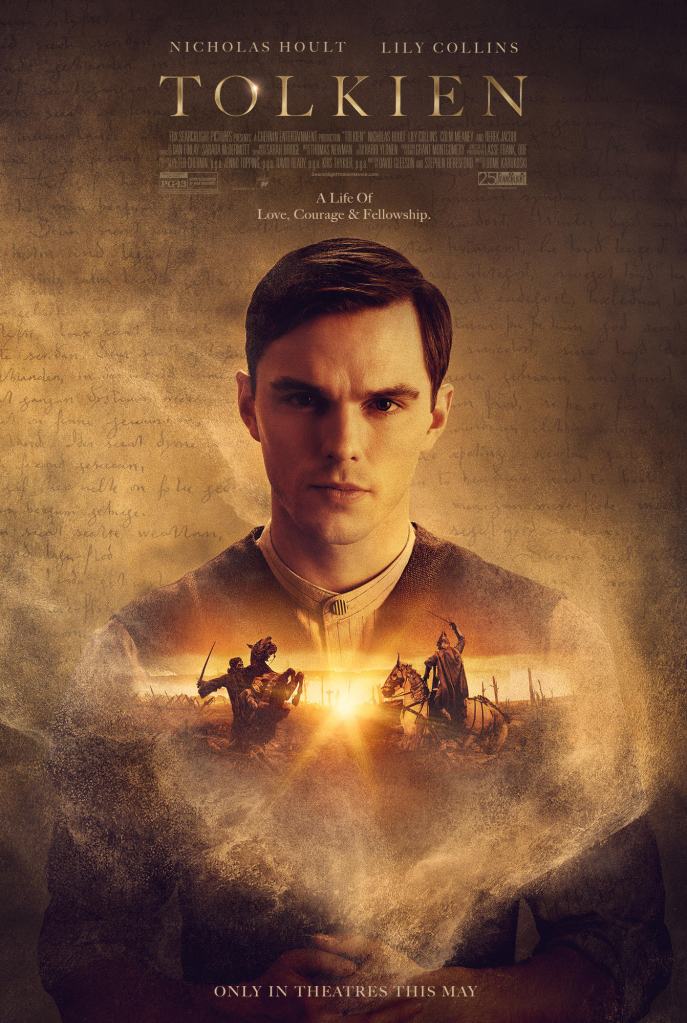 We all tell ourselves stories. This happened because that happened. At this time of my life I was on a great quest for whatever. All these bad things happened because so-and-so was out to get me. Once upon a time there was a child, who learned x, y and z, and grew up to be me. Narrative is one of the central sources of significance, one of the most important instruments by which we persuade ourselves that our lives are inherently meaningful. It is also the only conceivable way that a biographer can persuade us that their subject’s life is meaningful – meaning emerges as story. The adversities suffered by Einstein in his youth are obstacles overcome in the quest for general relativity. The privations Tolkien experienced in the First World War are formal causes of his later world-building.

I’m not about to criticise a film like Tolkien for constructing such stories, although I would argue that to posit such a story as the biographical truth of any private or public figure is to falsify the character of human experience. A story is presented to an audience in any film because it is hoped to be entertaining, moving or otherwise edifying, and I am also not about to criticise director Dome Karukoski for telling a story about J.R.R. Tolkien that reorganises the chronology and thematic material to be found in the documentary record to suit the requirements of his medium. The truth of Tolkien’s early years is known to nobody now living, even to his nonagenarian son, the fierce guardian of his creative legacy, Christopher Tolkien; his biography is fair game for the tale teller.

It’s probably clear, since I’ve said that I’m not going to criticise the film for this or that, that I’m going to criticise it for something. Given what I’ve said above, the grounds on which I think it’s possible to evaluate a biopic are twofold: its qualities as a work of narrative fiction, and its theses regarding its subject, particularly any theses regarding the relation between their biography and whatever it is they’re known for. Sadly, Tolkien fails dismally in both these areas, so much so that I don’t even feel like writing a great deal about it, despite my pronounced interest in its subject.

A story built up purely at the creator’s whim from the archival traces of a historical figure can be an excellent one – Hilary Mantel’s Wolf Hall arguably takes that approach, and it’s a very well-respected novel. But in most cases it’s more interesting to make a plausible effort to reconstruct the stories I was talking about in the opening paragraph, those that the subject must have told to themselves. And in the case of Tolkien’s romance with Edith Bratt, which is one of the two principal threads of this narrative, the story he told to himself is very closely related to one of his greatest literary achievements: the story of Beren and Lúthien, central to his constructed mythology. When Tolkien himself produced such a powerful romantic epic, which ends at the grave the lovers share in Oxford, with ‘Luthien’ and ‘Beren’ on the headstone, it would seem to be worth ignoring only if you have an absolute corker of a tale to tell in its place; but the romance as related in this film was, for me, a pretty pallid and pedestrian affair.

Stronger is the story told of Tolkien’s friendship with his schoolfriends, and the tragedy of their involvement in the First World War, although when I say it is stronger by comparison to the story of his courtship, this does not imply that any of the characters involved is particularly memorable, and the interest of the story is, if anything, undercut by the fact that one of its principals is someone we have all heard of. A further missed opportunity is the story of Tolkien’s growing interest in constructed languages, his ‘secret vice’ as he self-deprecatingly referred to it. In the documentary record we learn that his first encounter with such a language was with one invented by his two cousins, Mary and Marjorie Incledon, and that his first efforts in the field were made in collaboration with Mary; but the film’s stumbling attempts to describe his intellectual development fabulates a conventional story of sensitive male friendship and a patriarchal mentor, which even disregarding its many factual implausibilities, is not at all convincing.

This pattern of ignoring interesting and eminently storyable historical material in favour of inventing something pointlessly glib is a recurrent one. No opportunity is spared to offer incidents, invented or otherwise, as literalistic explanations for the contents of Tolkien’s work. While suffering from trench fever in France, the young Second Lieutenant Tolkien goes wandering around the front looking for his schoolfriend, at one point even accidentally participating in an assault; he is doggedly followed by a private from his unit who refuses to abandon his young officer, telling him repeatedly that he won’t leave him, and so forth. His name is revealed to be Sam. Dragons and dark riders appear amid the drifting mist over the front. Such incidents occur continually, in a way that is probably intended to be cleverly referential, but which comes off as simple-minded, and doesn’t really give Tolkien any credit for his considerable imaginative powers.

The only area in which the film succeeds is in its visual design. Edwardian England is realised beautifully, possibly a bit too beautifully — and is it because of Peaky Blinders that any period street scenes in Birmingham are now required to involve random conflagrations? The visual atmosphere of the trenches is powerful, and in purely visual terms the parallels drawn between that war and the darker parts of Middle Earth make some sense. Except that it is Peter Jackson’s visual imagination that seems to be explained by these scenes. That in fact seems to be the stumbling block over which the whole film topples headlong: its story offers a much more plausible explanation for the imaginative efforts that produced the Lord of the Rings movies, than for those which produced Tolkien’s legendarium – of which his two novels are a relatively minor part. As a biography, it’s a story about the wrong man.