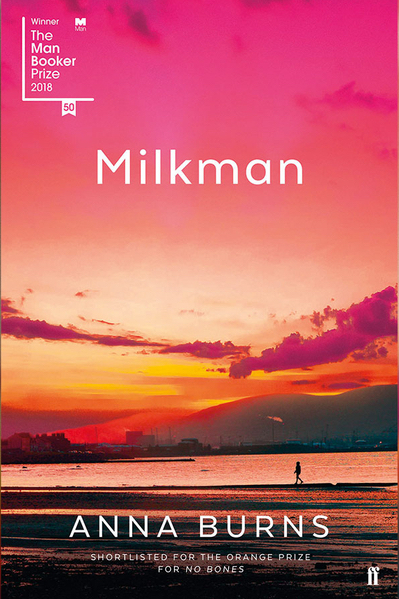 It’s very unusual for me to read a recently published novel, much less a prize-winning one. This is mainly because my reading is usually thematically led, as in my current exploration of psychogeographic, mnemonically focussed, and narrative-spatialising work, which has kept me busy with the back catalogues of W.G. Sebald, Michael Moorcock, Alan Moore and Iain Sinclair. It’s also because I take a very dim view of awards, but we can enjoy that rant another time. I didn’t know that Milkman had won the Booker when I started it, because I’m really not sufficiently interested to pay attention; instead I was directed to it by a word-of-mouth recommendation from a friend, which is something I’ve deliberately begun to make room for in my reading schedule.

It came to my attention after I’d got stuck in, because I was sufficiently taken with the book to find out a little about its author and its publication history, that it’s supposed to be a ‘difficult’ experimental text. This just goes to show how out of touch I am with popular taste in literature, despite the fact that I spend my days satisfying that taste in a public library – in my defence, I should point out that it’s a librarian’s job to judge books by their covers, and we very rarely get a chance to look inside the publications we circulate. So anyway, no; I didn’t find this book remotely ‘difficult’, but that other adjective, ‘experimental’ – where the hell does that come from? There is absolutely nothing about the formal approach taken by Anna Burns that is in any way more radical than that found in books published literally a century ago – James Joyce’s A Portrait of the Artist as a Young Man for example, or if that’s not hardcore enough for you, Ulysses, which will hit its centenary in a couple of years. It feels kind of depressing to see this book described as experimental.

What Burns does is to adopt a formal approach which best affords the kind of narrative she wants to construct – specifically a story of the effects on an individual’s inner life of some probably quite characteristic events that take place within a tightly knit urban Catholic community in late nineteen-seventies Northern Ireland. As such she chose to write an inner monologue, which describes subjective experiences with the same weight that it gives to objective events; this is presented in the particular idiolect of the narrator, which is pretty distinct, one imagines, from the general working-class dialect in which it is situated – although its characteristic sentence structures (extensively re-ordered in relation to standard English) are presumably representative of that dialect. In comparison to a neutral, detached narrator, constructed in some version of standard English, this might, then, require a little work on the part of the reader, but I’m still quite disheartened to learn it’s regarded as difficult. Once you get your ear in it’s perfectly easy to get the sense of the narration, and its cranky speech patterns are a principal source of both humour (of which there is a great deal) and characterisation. It seems like the ‘reading public’ (whatever that means) has misplaced its sense of adventure somewhere along the road.

The most formally radical thing that Burns does is to eschew, almost, but not quite completely, the use of proper nouns. Initially, this leaves the reader wondering where the story is set – but that actually becomes apparent pretty quickly; it’s not an ambiguity that’s milked for a big reveal. Instead it contributes to the affective domain of the narrative in ways that I’m still digesting. I find it easier to think about what the book might be like with names in it than I do to nail down what specific effect is achieved by their absence. It would certainly seem less particular, less like the idiosyncratic inner narrative of a specific individual; it would be perhaps easier to generalise, and something might be lost in that way. It certainly wouldn’t be easier to follow – the labels that Burns deploys for her characters are distinct and memorable. Tablets girl, Somebody McSomebody, third brother-in-law and longest friend all stick in the mind just as vividly as if they were given proper nouns, perhaps more so. One effect of this namelessness is that, with each character being labelled with just the sort of superficial tag we might use to recall the function of characters we weren’t that interested in (‘issues women’, ‘chef’), it becomes harder to lean on that tag when we think about them, harder to avoid attending to the actual language from which they are constructed.

And that language is the reason this book is worth reading. The story is involving because the narrator is so peculiar, so determined to follow her own path and not to be bogged down by the clart of social expectation, but her iconoclasm is produced not just in the things she does and thinks. It’s structured at the most fundamental level, in sentence construction and lexical selection, in image and allusion, into the language from which she and everything else in the book is sculpted. The plot, in fact, is an extremely straightforward, linear affair – or at least the fabula is. The narrative that is elaborated around that fabula, notwithstanding a little to-ing and fro-ing in recollection, is a straight arrow through the murky and convoluted labyrinth of one individual’s ruthlessly imagined emotional and affective experience.

And that, for me, is complexity enough. The narrator reflects on her responses, with the benefit of distance, from outside the timeframe (and arguably the social context) of the narrative, but she does not give the impression of having solved or explained the puzzle of the experiences that she describes – instead she simply clarifies why her younger self’s responses are what they are. Burns’ creative effort, despite the precise and well-judged design of the text on the larger scale, seems directed mainly at maintaining the linguistic universe of her narrator, rigorously and exhaustively, in detail, from the first sentence to the last. Characterisation and world-building are indistinguishable, both articulated through a close attention to the phonic and rhythmic qualities of language that is more usually associated with the practice of poetry.