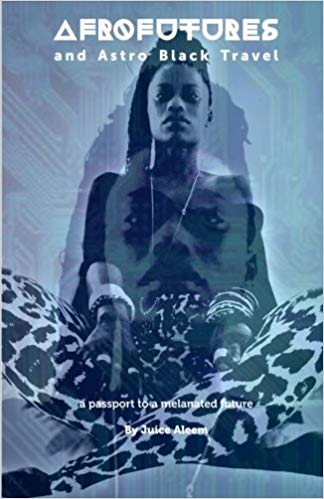 Juice Aleem has an inclusive attitude to his cosmic voyage. There seems very little reason for anyone seeking to revalue the markers of difference by which they have been excluded to invite white people along for the ride, but Juice Aleem makes very clear that they, along with a list that includes more or less everyone else, are among those who this book is for.  He later suggests, once he has established his positive valuation of blackness, that some white people are inwardly melanistic, and share in its virtues. This is a generous, if also strategic manoeuvre, given that his expanded sense of Afrofuturism includes some ostensibly essentialist philosophies, such as Rastafarianism and Islam.

Afrofutures and Astro Black Travel: a passport to a melanated future, to give this slim, self-published volume its full title, is not a critical study or a history of Afrofuturist cultural production, nor a guide to its collective oeuvre. It is a sort of manifesto, which surveys various fields of culture from a particular perspective, and attempts to synthesise a syncretic, synchronic philosophy around the figure of Afrofuturism, including anything or anyone that could be assimilated to its values, from Imhotep the ancient Egyptian politician and architect, to the ‘many interacting worlds’ theory of quantum mechanics.

The book does not present a structured, discursive argument for the existence of such an Afrofuturism, but seeks instead to invoke it linguistically, to call it into being by invocation, and by placing in the hands of its readers the tools they will need to repurpose language to its inclusive, progressive, and (to borrow a term from the shockingly racist H.P. Lovecraft) cosmicist agenda. In fact, Lovecraft is a good touchstone for this work, appearing in many ways as its polar opposite. Though he claimed, like Juice Aleem, to be principally interested in ‘man’s’ relationship with the cosmos, he framed that relationship in terms that were fearful of the unknown, narrowly exclusive, pessimistic and conservative. Where, in Lovecraft, doom is always impending, in this version of Afrofuturism there are no endings, because there are no beginnings in its faceted, geometric space-time, and the cosmic dark is identified with the beauty of black skin. Perhaps Alan Moore is one of those inwardly melanated white people, because the way he describes time in several of his works, notably Watchmen and Jerusalem, is remarkably close to Juice Aleem’s conception.

Afrofutures, although it is formally discursive, telling the reader a series of things, or making a series of observations and assertions, seems to me to be as much a poem as it is a monograph. It appropriates a huge range of popular and formal cultural production to its narrative, both that which is clearly Afrofuturist, such as Parliament-Funkadelic and Octavia E. Butler, and that whose genealogy appears distinct, such as Love and Rockets, a comic whose origins are Mexican-American. It performs this appropriation without the symbolic (and literal) violence of the colonialist plundering whose injuries it seeks to recuperate; instead it opens its doors in a gesture of hospitality, and names the many members of its family.