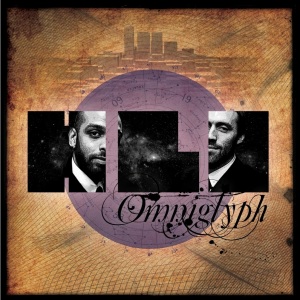 Rap is a form of spoken language; perhaps more than any other discursive art, it has no independent existence on the page; semantics are central to its meanings, but flow and orality are its material substance. It’s interesting then, that H.L.I. have chosen to title this release in a way that ascribes universal significance to a visual mark, and even seems to suggest that as a work, it intends to either represent, or present itself as equivalent to, such an infinitely polyvalent grapheme. It’s fair to assume that they’re not too hung up on the specific definition of a ‘glyph’, but all the same, taken as a general term for a sign or symbol, it clearly implies a static, atemporal locus of meaning, in stark contrast to the sequential unfolding of rap; it’s the lexical fixity of writing, not the syntactical uncertainty of speech, that is offered as the key to H.L.I.’s intentions, and the gateway to the meanings of Omniglyph.

This is not a record about critical theory, thankfully, but as a metaphor ‘omniglyph’ suggests a certain monolithic self-sufficiency of signification, and this is consistent with the fuliginous density of the music. Neither of these things are exactly signs of conformity within the highly contextual, utterance focussed world of hip-hop, where the most radical of meanings are usually rendered in the most accessible way possible, even when they are coded for the consumption of an audience ‘in the know’. Beats and flows on Omniglyph simultaneously mark out a heavy, centred regularity, and skitter off tangentially into disorientating spirals of sound, rhythm and denotation/ detonation. Basslines and kicks are like stormclouds, looming over the mixes as much as they support them, laconically marking time in a way that is more inevitable than propulsive; other elements are employed in varied and inventive ways, refusing their obvious affective possibilities, like the unresolving brass phrase in ‘Opus Day’. Bars are delivered with a belligerence and menace not unknown in the field, but threats are unspoken, existential consequences, not the usual tokens of a debased masculinity; and the darkness that seeps out through the cracks between the words is all the more compelling for its profound ambiguity, making tracks like Jurassic 5’s ‘Remember His Name’ or Us3’s ‘The Darkside’ sound obvious, and almost comfortably knowable.

The ‘Unseen Universe’ we are invited to contemplate by the opening cut is not something that H.L.I. seek to explain or reveal; their lyrics oversignify with a baroque opacity, like the darkest incarnation of Pablo Neruda in a poem like ‘Dead Gallop’, where grammar is repeatedly ruptured until meaning spills across the page like blood. While these ‘visceral stanzas’ (as they are called in ‘Vectors’) can all be parsed without difficulty, it’s the grammar of hip-hop in particular, and popular music in general, that is ruptured and eviscerated in search of its least desirable meanings. ‘I’ll plant a seed in your head/ in the shape of a bomb/ don’t panic’ is all the reassurance they can offer (in ‘Don’t Panic!’), but for me, the lyrical key is also in ‘Vectors’: ‘word is made flesh’. Process is congealed into matter, as promised by the title; meaning becomes too dense and too complex to be penetrated. Finally, as we strain to decode them, the lyrics cease to function discursively, and simply stand in place of the unsettling convolutions of the phenomenal universe. And that’s about as close as I can get to the meaning of ‘omniglyph’, or Omniglyph.

This music, for all its darkness, feels like a deeply humane response to the ineffable, with the wisdom not to offer any glib explanations or unsupportable consolations. That’s not to say that it’s miserable, depressing or negative; darkness is embraced with passion and power, not with fear. I don’t pretend to have analysed its lyrical content in thorough detail, but as a reviewer I’m concerned with its impact and its experiential surface: without writing them down and picking them apart (not forgetting that dissection is a process that kills its subjects) I can’t get any further into these words than I have. This is overtly experimental, avant-garde music, lyrically and sonically, but it is still hip-hop, and as such it articulates a bodily repetition that addresses the pelvis as much as the cranium; there’s little dissonance and no arrhythmia, but a heavy grinding insistence on time moving forward. Not many artists have the courage to turn their gaze on such forbidding territory, and fewer still have the skill to respond in a way that is simultaneously so dark and so enjoyable.