You Save You – Secondhand Suits And Cheap Sunglasses (punk folk)

This is a record that gets straight down to business, a short, kinetic acoustic guitar intro prefacing a series of remarks, delivered with such visceral charisma that it almost doesn’t matter what they mean; the fact that they mean a lot imbues this music with a density that belies its simplicity and lack of frills. You Save You are a duo, performing material of a texture that might be delivered by a single musician (apart from some simple percussion, presumably operated by the singer), but it’s very clearly two people’s energy on Secondhand Suits And Cheap Sunglasses (or maybe ten people’s!). The guitar playing is raw acoustic rock ‘n’ roll, and the vocals hover between declamation and raspy punkish singing. The songs owe as much (or more) to the tradition of spoken word poetry as they do to that of songwriting; their narratives are biographical, and if they engage with ‘big’ themes, it’s through the prism of the grittiest individual specificities of the powerless and uninfluential. These are stories of an urban world that will be familiar to many, even those who haven’t experienced it directly, because it has informed great swathes of British no-brow culture; it’s the world of the pub, the bookie’s, the gutter and the shiny suit; a world inhabited by drunks, punks, broken people, the perversely optimistic, the irredeemably cynical, and the furiously articulate. These are songs of the people who drink, fight, gamble and fuck their way to comfortable oblivion, not because they’re too stupid and ill-informed to know better, but because they’re too intelligent and educated to bear the violence done to the human spirit by ‘Western civilization’. You Save You explicitly position themselves in a tradition signposted by artists such as Nick Cave, The Pogues and Bob Dylan. I’d be inclined to add Ian Dury to that list, both for the guttural relish of his delivery, and his affectionate portrayal of the street characters to whose value the mainstream of society is entirely oblivious, to its enormous loss. This is a passionate music of the margins, and as life affirming a record as I’ve heard this year.

Something is going to happen. I’m not entirely sure what, but I’m pretty sure it’s not going to be anything nice and comfortable, like a surprise party or an unexpected visit from an old friend… Aether is an essay in the subtle, subliminal escalation of tension; it is an album of pelagic currents, which sometimes break the surface with a gritty and menacing presence, but never reveal their shapes, their borders, their beginnings or ends. ‘Hymn To The Eternal Void’, the opening track, begins with the intimation of a space, a large and unknowable volume, but at around four minutes in it is ruptured by the arrival of a sound that insists on its own materiality. These are the materials from which Nils Quak constructs the album: long tones and drones (sometimes with briefer sounds to mark transitions), sometimes soft and muted, like a reverb return without its source audio, and sometimes ineluctably, physically present. Your guess would be as good as mine as to how these sounds are generated: there are so many possibilities available to the musician now that, unless they make a point of telling us, it’s a safe assumption that it doesn’t matter to the reception of the work. The sounds on Aether could have an acoustic source, or they could be synthesized, but either way they seem to have been heavily processed (although again, it’s possible that they haven’t been). The common thread is a sense of abrasion; sometimes there is a quality like the scraping of bows on strings, and at other times it is harsher and harder, like the gritty, distinctly rotational sound of overdriven organ tonewheels. As the granularity of the sound varies, so does its presence, but this recording resolutely refuses to answer any questions, or to indulge any fantasies of closure; its sonic materials never come out into the light, but slip smoothly beneath the surface as soon as the listener begins to grasp them. Towards the end of ‘Sinterbecken’ the soundworld begins to break apart, the collapse of its debris documented in ‘Broken Things on a Saturday Morning’, until all that remains are the spectres of ‘Im Wald Da Wohnen Gespenster’. Not a comfortable listen, but a deeply rewarding one. 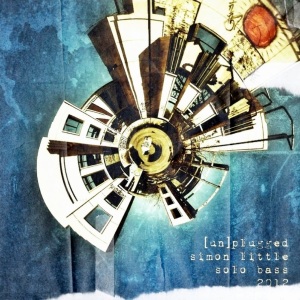 Simon Little, when he’s not busy being a leading side-man, releases albums of solo bass performances, recorded using a live looping set-up. Of course it’s impossible to tell exactly what’s going on with such an arrangement where a studio recording is concerned: Little doesn’t make any particular claims about whether what we hear on the record could be reproduced live, or whether there’s the occasional crafty overdub, but that doesn’t really matter. In the past his recordings have particularly appealed to me for their sonic inventiveness: there’s a certain amount of that on [un]plugged, but there’s also a concerted effort to present the voice of his instrument as it sounds in the flesh, since he’s using his new toy, an acoustic bass guitar. The acoustic bass guitar is a strange instrument, neither one thing or another, with some specific sonic characteristics: Little doesn’t try to tame its prominent string noises, and for the most part we can hear its breathy midrange physicality. The settings have a nice line in angular rhythmic momentum, while the circular modal improvisations are clearly recognisable as Simon Little’s playing. The melodies are shapely, but eschew any overriding sense of direction, serving instead to articulate each mode, and to solidify its ambience into a more architectural atmosphere than a purely chordal approach could achieve. There’s still a fair bit of electro-trickery, most noticeably in the regular use of backwards loops, but on the whole it’s a layering of note choices, and a delicacy of phrasing that gives this album its substance; the attentive listener should not be distracted by the prominence of melody into searching for the sort of discursive or overtly expressionistic meanings found in music where improvisation is the point. Here it seems (to me at least) to be a means to an end, a contributing element in limpid, shimmering pools of modal harmony, that speak of sunlight, shade and water. This is music with an easy aesthetic, but a surprisingly complex surface, in which Little’s  beautiful playing is always a prominent pleasure, never overbearing or dominating. 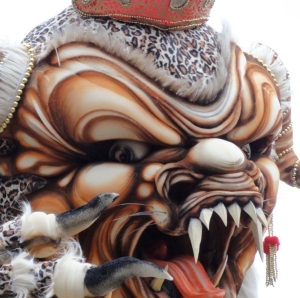 One of the tags on Luminous Monsters’ Bandcamp page is ‘improvisation’; whether their oeuvre is wholly improvised, or whether improvisation is something that takes place within a context of relative fixity, is left to the listener to decide. The music is a form of psychedelic drone, mostly generated by electric guitars, although there are layers of synth sounds as well. ‘Layers’ is the word, as this album presents thick, luscious skeins of distorted guitar that produce the same sort of distance and anaesthesia as shoegaze. It presents other things as well, though: there are developmental sonic transformations, and minimalistically persistent rhythmic ostinatos that demand the listener’s attention in ways quite unlike the deep buffer of shoegaze. What it does with that attention is more an attempt at hypnotism than discourse, however, frustrating any anticipation of a narrative arc, and creating ambiences that speak of a confused and incoherent physical space. There is an enormous complexity of layered sounds in these five tracks, and evidence of some very detailed sonic craftsmanship. The musical materials are mostly reminiscent of very late 1960s electric guitar playing, the heavily fuzzed orientalist exoticism of post-hippy psychedelia’s search for ego annihilation through the meditative qualities of the extended jam. According to their Facebook Luminous Monsters hail from Glasgow and K’un-L’un, the latter being Marvel Comics’ version of Tibet’s Kunlun Mountains, the purported Taoist paradise; the comic book version is an interdimensional nexus useful for fostering martial arts flavoured superheroes. Make of this (and the baroque Chinese dragon on the cover) what you will: Golden Scales, Blazing Plumage takes the listener far outside (or within) themselves. To abandon yourself to its twisting pathways is probably not going to turn you into a hero like Iron Fist, but it’s definitely a trip.  At the far outer fringes of rock there are some strange and magical places to explore, places where, in the words of ‘Circle Of Serpents’, the final track, ‘everything goes round and round and round and round and round and round.’