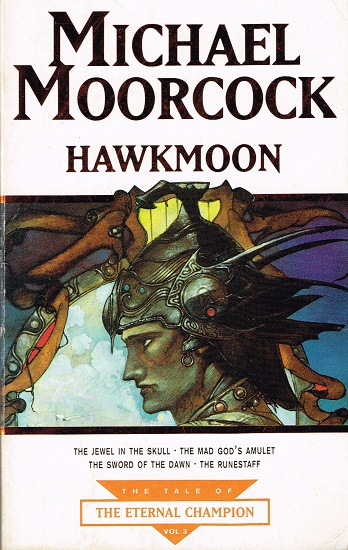 My long-interrupted project to read or re-read all of Michael Moorcock’s Eternal Champion books has at last been resumed, after several years’ hiatus. Volume 3 in this 1990s omnibus series brings together the original four Hawkmoon novels, which were the first Moorcock I ever read, aged thirteen. I read the books as they were written: at pace. I think I read somewhere that they were each written in a weekend, which seems entirely plausible: not to suggest they’re shoddy or rushed, but they are individually short, and have a headlong style which wastes little time on scene-setting or reflection. It’s interesting to compare this to the work of contemporary fantasy writers, who customarily publish their books in long series of volumes as large as this collection.

In fact, it might not be strictly accurate to describe this as fantasy writing at all. As a generic label the term ‘fantasy’ was used almost exclusively to describe a type of children’s literature, until the swarms of Tolkien imitators like Terry Brooks began to emerge in the 1970s. Prior to this books set in imaginary worlds featuring magic and medieval technology didn’t really have a genre label, although Fritz Leiber coined the term ‘sword-and-sorcery’ in 1961 in a fanzine letters page exchange with Moorcock. This was retrospectively applied to the tradition from which both writers sprang, one parallel and separate to the modern Romances written by William Morris and others, from which J.R.R. Tolkien emerged. The sword-and-sorcery tradition was born in commercial pulp publishing, firstly in magazines and later in series of short, disposable novels, easy to read and to slip into a pocket. The literary ancestor of Moorcock’s heroes was not one of Thomas Malory’s Arthurian knights, but Robert E. Howard’s Conan the Barbarian.

That tradition is key to understanding the form of the Hawkmoon books, which might not be to the taste of many twenty-first century fantasy readers. World building here is a pretext for storytelling, an aside which emerges in the cracks in a frenetic progression of action sequences. There is almost no exposition, few descriptive passages, and little concern for the visual specification of the setting – the reader needs to imagine it for themselves, from a pretty bare set of details. This is in contrast to many of Moorcock’s later, more mature works, in some which he takes the time to establish a sense of place, and credits the reader with a willingness to suspend their disbelief. In these fast-paced, rollicking entertainments neither writer nor reader believes even provisionally in the reality of the characters or their experiences – it’s more like a cartoon than a movie.

It’s also full of humour, despite a tone which is in many places quite sombre. It is set in a far-future version of Europe, long after some kind of nuclear apocalypse which reduced humanity to pre-modern technologies. A dark empire called Granbretan (Great Britain) is taking over the world by conquest, torturing and raping the population of Europe, and worshipping terrifying gods such as Jhone, Jhorg, Phowl and Rhunga (The Beatles), and Aral Vilsn (Harold Wilson), who gave birth to the gods of chaos and doom, Blansacredid (‘balance of credit’) and Sqvese (‘[credit] squeeze’). Of course there’s an element of political commentary in this, as well as simple satire, and that’s something that emerges throughout, albeit in a pretty low-key way. Ruling classes do not get a good press for the most part, with the exception of the heroic central characters.

Moorcock’s introduction informs us that he resisted the urge to revise these books, preferring to present them as they were originally published, and he admits that they’re pretty rough and ready. He was quite a young man when he wrote them, but they’re not juvenilia; they’re commercial fiction , with a stripped-down, muscular and energetic character that’s appropriate to their genre, and a very instrumental approach to language. There are a lot of ideas knocking about in them, but they’re not really central to the reading experience. Taken as a whole, Moorcock’s fantasy writing can be read as a meditation on chaos, randomness, fate, human agency and so forth. His idea of the Eternal Champion is a riff on Joseph Campbell’s The Hero With a Thousand Faces, an anthropological study of mythical heroic archetypes, but it is also an investigation of determinism, of repetition and uniqueness. In some stories these themes emerge explicitly, but in others they are just part of the furniture, and that’s the case with Hawkmoon.

The books were a lot of fun to re-read, and they have a wonderfully 1960s aesthetic to them. Heroic characters are often pale and etiolated in appearance, and it’s easy to guess that they were an influence on people like David Bowie, whose Thin White Duke persona is prefigured by both villains and protagonists in these books. The collection as a whole Moorcock dedicates to ‘my friend Mr. Ian Kilminster’ (Lemmy), while individual volumes are dedicated to space-rock luminaries Dave Brock and Nik Turner. Moorcock has always had a lot to do with music, writing lyrics for Hawkwind, and leading his own band The Deep Fix; for me, reading these short novels has been an experience akin to listening to a space-rock concept album. The narrative flows on, whether you’re paying attention or not, and at the end you’re left with an exhilarated impression of its psychedelic atmosphere, without necessarily being able to say what just happened. These are not Moorcock’s masterpieces, but he’s right to stand by them, in all their imperfections: their raw, punky energy wouldn’t survive much editing.