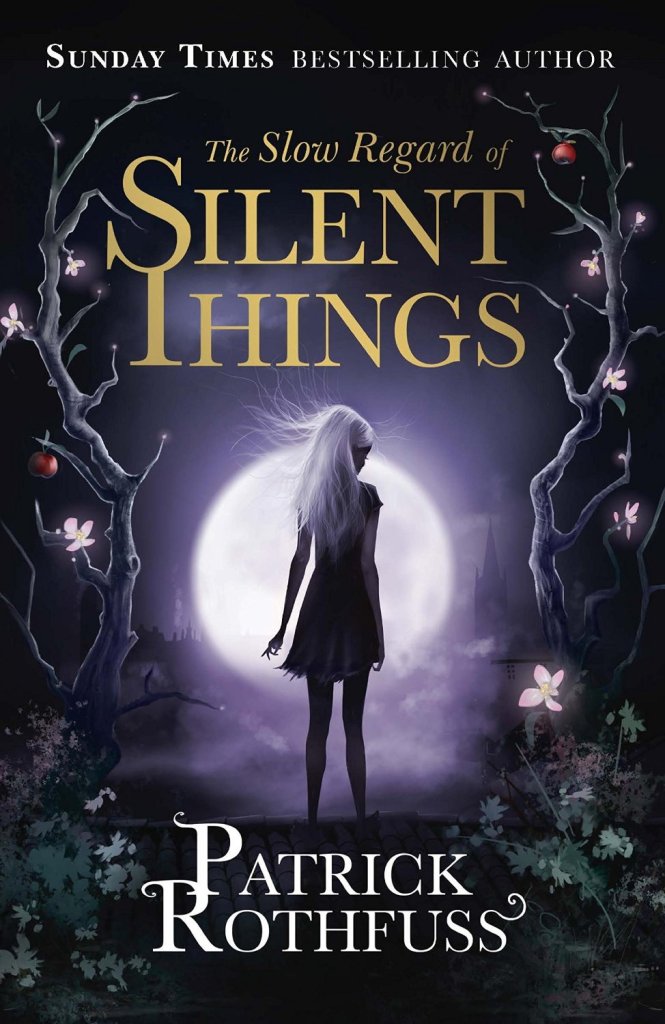 Patrick Rothfuss is an excellent writer slumming it in the undemanding environs of commercial fiction. Don’t get me wrong – I enjoyed reading The Slow Regard of Silent Things. It is a novella with much to recommend it, a pleasing book, a pretty book, written with a deft touch technically and some real imagination. It’s even formally inventive, to a degree. But in choosing to be a big fish in a little pond, Rothfuss is falling far short of his obvious potential. I only had to read about a chapter of The Name of the Wind to know that he was a talented prose-writer, and about a third of the book to know that he was an expert storyteller; but to parlay those things into a truly excellent novel takes a certain self-critical rigour that the task of shifting product in the commercial fantasy fiction marketplace does not demand. And it may sound unfair of me to expect a standard of Rothfuss that is not to be found in the work of David Eddings, or Robert Jordan, or Brandon Sanderson, and that I would not expect to find there: but those writers are hacks. Rothfuss has it in him to write an excellent novel, with no genre qualifier required, and his uncritical reproduction of genre tropes serves only to reinforce the false but widespread impression that fantasy-fiction is somehow inferior to Lit Fic (as China Miéville has usefully christened the dominant genre of prose fiction). Measured against commercial fantasy fiction, The Slow Regard of Silent Things is about ten times as good as anything else you’ll read (with some exceptions), but why should it be measured in that way? Why shouldn’t it be measured against Pride and Prejudice, Moby Dick, Heart of Darkness, Mrs. Dalloway, Ulysses, Nineteen-Eighty-Four, Darkness at Noon, or Foucault’s Pendulum? There is fantasy-fiction and SF that can hold its head up in that company, and Rothfuss is capable of writing such. Compared to such books, or to the work of Ray Bradbury, Michael Moorcock, Walter M. Miller, Ursula K. LeGuin or Alan Moore (to pick a few at random from a very long list of world-class genre writers), The Slow Regard of Silent Things is an apprentice piece, a good effort, but a curiosity at best. It was a few hours well spent, but with its loose linguistic whimsy, with its author’s misty-eyed view of women informing the construction of its sole character, and with its thematic uncertainty, it offers few challenges to the interested reader.

The narrative is built from its protagonist’s pathetic fallacies, which is an excellent conceit, both aesthetically and formally. An engaging tension is maintained throughout between two competing possibilities, that said protagonist is delusional, suffering from something resembling OCD, or that they are acutely sensitive to the vagaries of their magical landscape. Given the relationship between magic and storytelling, which has been so powerfully highlighted in the work and thought of Alan Moore, this tension might have been a powerful factor to unify the thematic and formal qualities of the work; but while Rothfuss is far from oblivious to this relationship (indeed it may be the central theme of his Kingkiller Chronicles), he does not really exploit it as effectively as he might. By sitting comfortably within the conventions of his chosen genre he lets himself (and his readers) off the hook: these possibly magical things happen within the special circumstances of his imagined world, but we are not encouraged to think that they have any particular relevance to our own. What he does is almost the opposite of psychogeography, taking the occult subtext out of our reality and immuring it safely in an unreal imaginary world carefully constructed to accommodate it. As such he takes the reader on an entertaining tour of his protagonist’s inner landscape (and of her restricted outer landscape), and offers a sympathetic treatment of a certain disengagement from the world that many of us may feel (particularly those of us that enjoy socially marginal pleasures like fantasy fiction). This simple and touching narrative is delivered with an aesthetic delicacy that feels like elderflower wine on the palate, or like watching a light snowfall on a frozen pond. For all that it has shortcomings, it’s a real pleasure.