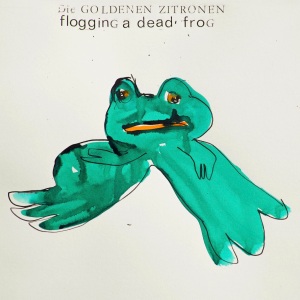 Formed at the inception of what would come to be known as the Hamburger Schule (from which they vehemently distance themselves), Die Goldenen Zitronen had their beginnings as an identifiably punk band, but a commitment to creative, aesthetic and political rigour has led them to a variety of stylistic positions, some quite avant-garde. Entertainment might be claimed as a touchstone of punk aesthetics, though, and in that sense, as well as in the overtly political character of many of the songs, it would seem fair to argue that this album of predominantly electronic New Wave/ avant-funk sounds is still clearly situated within the broad tradition of punk. Incidentally, I know that ‘tradition’ is an uncomfortable term for many fans of punk music, but forty years of inherited practice and recognisable stylistics amount to exactly that – and inasmuch as novelty is a component of that tradition, Flogging A Dead Frog might just be an exemplary punk record. Rather than presenting an entirely new set of material, this album comprises new versions of songs from recent releases, either instrumental, or with lyrics in English. As Die Goldenen Zitronen were one of the 1980s acts to legitimise the use of German lyrics in German rock music, this represents an important departure, and one that can only be interpreted as creatively significant. Unfortunately I’m not familiar with the original versions of these songs, and nor do I understand German well enough to offer any comparison between the English lyrics on Dead Frog and the texts from which they are translated, so my responses to this album will be informed by its aesthetic and stylistic resonances rather than the well-informed contextual analysis that I and my readers might prefer… The Altin Village & Mine press release speaks of the band’s ‘tremendous nomadism between punk, techno and krautrock’, which suggests that these three important streams of German popular music are usually as mutually exclusive there as they are in the UK (where this incorrigibly parochial hack makes his home). It also suggests that the music should sound chimerical, a stitched together collision of practices and aesthetics, but the band’s nomadism is more implicit in its generic ambiguity than it is enacted in an identifiable succession of stylistic voltes faces. The sound of this recording is, in fact, remarkably consistent.

If there is a characteristic of the sounds collected on Flogging A Dead Frog that can be readily ascribed to the above-mentioned musical practices, it is rhythmic insistence. A steady synth or synth-bass pulse propels many of these pieces on a single repeated tone, in a way that is strongly reminiscent of the motorik beats employed by some of the acts associated with krautrock. Elsewhere the arrangements deploy jerky, deadpan syncopations, but there is rarely a hint of punk’s atavistic onrush, or of its insurgent bacchanalia. This is calm music, dynamically moderate and politically measured, its interventions both more ambiguous and more precise than the radiant anger dominant in the punk-rock tradition. While pulsating monophonic synthesiser voices are a constant throughout the album, the arrangements are built up with live drums, electric guitar and electric bass – although rarely all at the same time. The textures are spare, and each instrumental colour is applied deliberately, in distinct gestures, framed in space, as with the intermittent guitar chords used to apply dabs of pigment to ‘The Investor’. When the track that follows it, ‘Crashing Stockmarkets’, enters with a gritty skein of guitar noise it seems that the band are reaching for punk fundamentals, but as the arrangement unfolds this is revealed also to be a gesture, one of several monomers joined in the long chain of the utterance. This approach is the source of the music’s distinctiveness, each song constructed like a scaffold, and each structural element remaining audible as such, rather than being subsumed into a rhetorically persuasive summation, as is common practice in almost any identifiable musical style. ‘This I’m Not Telling You’ closes the album with a shuffle beat, as though to dispel the severe directionality of its earlier rhythms, and proceeds through a series of subtle sonic manipulations of synthesiser voice and guitar. The overt simplicity of the songs tends to efface the craft that informs the precise selection and combination of sounds that make them up, but here it is allowed to come to the fore.

I have no doubt that the experience of listening would be enriched by an enhanced engagement with the music’s context, particularly in terms of a familiarity with the recordings which Flogging A Dead Frog revisits. However, the album does not rely on such a familiarity, or at least it does not fail to proffer meanings in its absence. In practice, as a more or less ignorant listener, I was able to invoke a number of contextual frames, sufficiently numerous and indeterminate to produce the complexity and polysemy I might associate with a well-glossed encounter. There are the stylistic genres referred to above, with their associated formal (but still historical) modalities; there is the globally understood set of practices gathered in proximity to the rubric of ‘punk culture’ (music as activism, performative criticality, a concern for values of originatory independence, etc); and there is my dim but persistent awareness of the German post-war counterculture, with its history of rigorous political commitment, a baton passed from generation to generation along with the understanding that socialist and revolutionary politics are not separable. And of course there are the many broader understandings of Western popular music, its technical resources, and its means of signification. As apprehended in these shifting and intersecting frames, Die Goldenen Zitronen announce themselves here as both fun-loving and committed, as entertainers and advocates, as political thinkers and living dancers. In other words, although this is a record of music whose intentions are serious, they are pursued through satire, and through the autonomic pleasures of accessible and playful musical sounds. There is a wry, deadpan quality to the granular repetitions with which the arrangements are orchestrated, and the vocal delivery is undeniably humorous. This is an album with a great deal to say, but which never shirks its responsibilities to the listener, and which is as entertaining as it is rigorous.