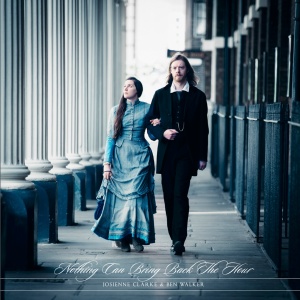 I come late to most notable artists, since I’m not the sort of person that avidly follows the latest developments, or that cares much one way or the other about currency. It’s pure chance that I came across this most accomplished duo on the cusp of their currently burgeoning notoriety. I was lucky enough to share the bill with them on one occasion, and their performance was the undisputed highlight of my evening; shortly thereafter I received a review submission from Mark Harrison, in whose band they both play; and Josienne Clarke was sufficiently appreciative of that review to contact me regarding this release. I’m not known for the speed with which I write my reviews, and by the time I got around to typing this, they’d been nominated for Best Album and Best Duo in the Radio 2 Folk Awards, received a five star review in Songlines and appeared on the front cover of fRoots magazine. My usual strategy of pinning some sort of critical authenticity to the coat-tails of my subjects’ obscurity might not serve here, then! Fortunately, if anyone feels inclined to accuse me of hitching a ride on the consensus, they’ll only need to listen to any of these tracks for around thirty seconds to hear the quality. Quality, of course, means several things, and the quality of the quality with which this music is imbued is certainly the kind that the mainstream folk establishment adores; writing, performing and recording with great precision, in a way that doesn’t present any sort of a challenge to prevailing assumptions, is one way of getting the right sort of attention. However, while I am very interested in subversive or underground approaches, and outsider art, I’m equally alert to the potential rewards of ‘insider’ work, and this album is as creatively rigorous as anything I’ve heard. Josienne Clarke and Ben Walker take a language that has been negotiated in several overlapping communities over the past several decades, a clearly defined common practice, and they turn it very precisely to their own purposes, demonstrating emphatically that the mainstream does not necessarily equate to the generic. Their security in this language is evinced by the ease and subtlety with which they incorporate other musical materials and orchestral resources into a core practice that is founded in the procedures of British acoustic folk, but not bound by them.

That Josienne Clarke and Ben Walker are a performing duo is evident throughout these recordings; even when the core of an arrangement is not obviously the marriage of guitar and voice, you can hear the presence of both creative voices throughout the album. It never sounds as though someone has produced an accompaniment and given it to someone else to decorate with their vocal cords; these songs are fully integrated, internally coherent artistic statements, in which Clarke’s voice is as much a part of each arrangement as Walker’s guitar, and each other element as much a vessel of the music’s significance as Clarke’s voice. I’ve always been wary of claims that musicians place their skills at the service of the material, as though the songs had some abstract existence distinct from the sound that’s made when they’re played, but it’s certainly fair to say that Nothing Can Bring Back The Hour is all about the songs, inasmuch as no clear hierarchy of value seems to exist among the the various contributions to the totality. This effect owes much of its seamless subtlety to the sure hand with which the songs are orchestrated; when the bass enters in ‘The Tangled Tree’ it is suddenly an entire band playing, its simple marking of the time imparting as much sense of groove as an entire rhythm section laying it down hard.

The songs are essays in concision, never restating what needs stating only once. It’s always very clear, and the duo are always obviously very aware, what the central point is of each piece; they find the stylistic materials and instrumental resources to best present it with unerring certainty. For the most part these fall somewhere between the British folksong tradition and the more austere wing of Americana, although there are a couple of arrangements (‘Mainland’ and ‘Let No Man Steal Your Thyme’), paradoxically the most ‘modern’ sounding, that are grounded in the kind of pan-Celtic expansiveness pioneered by the likes of Moving Hearts. The production is extremely sophisticated, incorporating many subtle elements of processing, that draw very little attention to themselves, even when quite striking, like the backwards warblings in ‘The Tangled Tree’. The arrangements employ, piano, keyboards and brass, in original and varied ways, that somehow feel as though though they emanate directly from Walker’s guitar and Clarke’s larynx. ‘Mainland’ is followed by a distinctly Baroque sounding, contrapuntal recorder arrangement, serving as an introduction to the the swaying waltz of ‘The Queen Of Hearts’, but the contrast between them is far from jarring; the transition is as smoothly natural as the shapely melismas and tasteful glissandi of Clarke’s vocal performances. The duo seem to have a taste for compound meters and triple time (although they don’t actually give us a slip jig), in welcome contrast to the preponderance of four feels in Western music. I don’t want to give the impression that the album sounds eclectic, as it is above all consistent, but it integrates a surprising variety of approaches, sounds and methods into a singular and cogent creative utterance.

Clarke speaks self-deprecatingly of her work as a lyricist, calling it ‘miserable’; but her misery is not a perspective, or even an affective state, so much as it is an aesthetic position, one which imbues the sound of the music as much as it does the literal content of the words. There’s a quietness to the music, even when it drives; ‘It Would Not Be A Rose’ is as active an arrangement as any on the album, but it feels as measured and as calm as the much quieter combination of guitar curlicues and vocal depositions that follows it in ‘I Wonder What Is Keeping My True Love Tonight’. So while it might be true to say that most or all of the songs are ‘sad’, in the crudely simplistic sense of ‘not jolly’, it would be more useful to observe that they have a reflective and lucid quality that is usually absent from music of an overtly celebratory or exhortative character. The predominant concern of the original compositions is to hold a tension in balance, which is a far more creatively (and personally) mature project than the conventional search for redemptive closure in emotional pain, for the silver lining in the dark cloud; indeed, that commonplace cliché is explicitly and comprehensively dismissed in the opening song. ‘Silverline’ inverts the compensatory positivity of the proverb, highlighting the melancholy and loss that can colour the most affirmational episode, not calling it one way or the other, but simply allowing the contending modes of experience to co-exist as they do in life. This is, in my view, a perceptive analysis of the signifying modality of traditional music, where songs may offer compensations or catharses, but where the life experience of the historical participants would have made any attempt to present a purely positive affect seem naïvely childish. Emotional or affective straightforwardness is the business of the ideologue, or the fantasy of those who have led the sort of pampered existence in which they can expect, for example, all of their children to survive to adulthood.

Bookending the album is another perspective on the same observation; ‘Water To Wine’ acknowledges hurt, exploring the pain involved in releasing aspiration and shifting attention to the present, but it is predominantly an optimistic piece, or at least one that affirms the possibility of joy. And in fact, the whole album affirms the possibility of joy, in a way that is only possible by acknowledging hurt; if joy is something real, rather than an escapist fantasy, then it’s something to be found in the midst of misery, tedium, confusion, amusement and loss. Most people are probably more alive to this observation in their appreciation of humour than when they listen to music, which is sadly expected to be uncomplicated and direct. Well, there aren’t any comic songs here, but there’s a great deal of wit; in fact, one of the traditions in which I’d locate this music, is the literary entertainment of the American songbook. I’m not talking about the musical materials, but about a very specific combination of musical and lyrical nuance; American jazz and show-tune songwriters in the middle decades of the twentieth century staked out a space in which a form of subtle and sophisticated erudition could flourish in the glare of the commercial spotlight, unnoticed by many but greatly appreciated by those that did. Well, Josienne Clarke and Ben Walker are not hampered by the demands of mainstream commercial production, and hopefully their erudition will reach a high proportion of their audience, but they have also built themselves a space in which fine distinctions of meaning can flourish. ‘I Never Learned French’ brings a wry humour to the forefront, but the same humane delicacy animates the entire album. The warp and weft of their work has a clarity, lucidity and simplicity that can only exist in the light of a precise and explicit creative vision. Manipulating and marshaling their materials with a broad understanding of their resonances, in their selection of traditional texts as much as in their original compositions, they have achieved a set of meanings that are as recognisable as they are impossible to paraphrase, as familiar as they are novel; and that, to my mind, is precisely the best thing that can be said about a work of art.