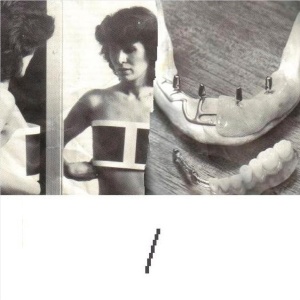 This entire album is performed straight to tape (or whatever recording medium was used) on a Roland MC-505 groovebox; Cory Peak chose to use a particular set of simple, rounded timbres that gives it a distinct 8-bit vibe, although the machine is considerably more sophisticated, and a much more powerful synthesiser, than the devices that gave rise to that genre. The point is a similar one, as well: in an era of expanding technological possibilities, where the range of options available to electronic music producers on even the tightest budgets is dauntingly vast, defining a closely constrained set of creative boundaries can be empowering rather than limiting. In fact this is a lesson that artists in every field have to learn: focus is a necessary pre-requisite to any kind of a coherent statement. In the case of / (Andor) there is a consistent sound across all thirteen tunes, and a pretty consistent compositional approach, which is equally a function of the particular characteristics of the groovebox, adapted as it is to the lyric formal demands of the pop song or the dance tune. Within the boundaries of that creative zone, Peak makes a methodical exploration of the possibilities afforded to a stylistic dialect of funky, minor-key synthpop and electro, without recourse to vocals. ‘Kraftmerk’, with which the album opens, reminded me of the atmospheric soundtrack to the classic FPS game Doom II, to which many hours of my early twenties were sacrificed, and that combination of melancholy with driving muscularity is a touchstone for the whole recording. Sometimes the musical focus is on texture and timbre, as in the contrasting clean and dirty sounds of ‘Booz Hound’, sometimes it’s on the groove, as in the jerky, staccato ‘Pump’d’, and at other times, ‘Runawayz’ for example, it’s melody at the centre of things. Whatever the weighting, these are all compositions in the round, however; they’re simple enough tunes, but they all have enough interest in each musical dimension, and sufficient contrast with what precedes and succeeds them, to keep the attention of the listener for the relatively brief period that they request it. / (Andor) skirts pretty close to the limits of my tolerance for such a narrow field of sonic materials, but it sticks to the right side of that line, and doesn’t outstay its welcome, despite its relatively hefty running time. It’s a very pleasing and atmospheric listen, and it’s great to hear music that foregrounds its author’s creativity so baldly as the hook on which it hangs. In his guise as the idiosyncratic hip-hop micro-label Sassbologna, Cory Peak has established his interest in music of a truly independent bent; with / (Andor) he shows he can walk the walk as well as he can talk it.

Tall T – …they call him The Incredible (hip-hop) 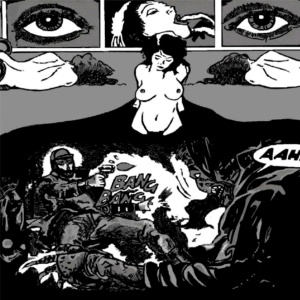 There’s a lot of emcees that sound like each other; sure, there are a lot of distinct approaches to delivery floating around, but most have a multitude of adherents, and there are very few rappers spitting in a style that is truly unique. Tall T is one of them. True, his recipe is unlikely to ever appeal to the mainstream hip-hop audience, but conversely, he’s unlikely to get any rivals stepping on his toes; lyrics in English, declaimed in a pronounced German accent with a funky but utterly deadpan flow. He sounds as though he’s rapping in character as the Terminator, or a version of the Terminator that took ‘hasta la vista, baby’ as his first step on the road to a post-graduate degree in streetwise terminology. This might strike you as the sort of schtick that can get old petty fast, but although humour is the central plank of this album, the Tall T persona is a lot more than a glib comic gimmick. For one thing, …they call him The Incredible showcases a succession of diverse and creative productions, with a magpie approach to the curation of sonic materials; all the tracks are driving and compelling, even the slow and spare beat of the melancholy ‘2 Tales’ propelling the lyrics like a hammer striking a nail. For another, as a non-native speaker of English, this emcee has a startlingly confident grasp of its subtleties, and is able to warp and manipulate the language to his requirements as well as anyone. Wordplay, puns, cultural references, double-meanings, thought rhymes and every other element of the lyricist’s arsenal are deployed in gleeful profusion. The tropes and conventions of hip-hop are lionised and satirised in roughly equal measure; there’s boasting and trash-talk, and while you never get the impression Tall T has an inflated sense of his own worth, he writes and delivers his bars with palpable commitment. Whether there is any fundamental set of meanings beneath the humour and the fun is moot; ‘go in search for the sense of my lyrics/ you’ll find nothing like David Lynch critics’, we are warned in ‘Weird Synapses’, but if nothing else, this is a celebration of hip-hop aesthetics, and while there may not be any particular message to most of these tracks, as a whole, the album is a manifesto for creative independence, artistic integrity and a true fan’s love of the music. As I’ve argued repeatedly in the past, whether or not Tall T thinks about these things, that’s an inherently subversive position. With music this good coming out on cassette, from a micro-label like Sassbologna, who needs the music industry, CDs or even downloads? 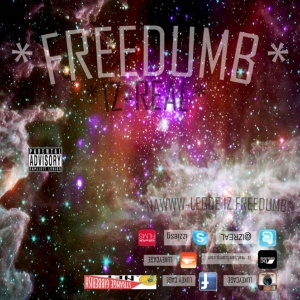 Like the Tall T album reviewed above, NAWWW-LEDGE IZ FREEDUMB is equal parts loving homage and incisive satire. The tracks collected here were recorded prior to 2010, largely between 2007 and 2009, which gives them a certain period charm, with all the MySpace (MyWhat?) references… Before you allow yourself the warm glow of hindsight superiority, remember that one day Facebook and Twitter will be equally dated; in fact, given that most of the arts are in their stylistic end times (as the splendid Grayson Perry recently pointed out in the second of his Reith Lectures) a few cues to locate the work historically can provide the listener with an invaluable handle. There are more zeitgeisty elements, such as the song named for and dedicated to the exploits of Latarian Milton, who was in the news in 2008 as a seven year old joyrider; however, for the most part, I’m immune to that shit, since I take no interest in the churning currents of mass culture. For that reason, I miss most of the references in music like this, but I like to think I still ‘get it’. I certainly enjoy it. The skits here are actually the funniest bits, which is no reflection on the degree or quality of humour in the tracks; it’s just that there is some kind of comedic genius at work, producing character comedy of the most viciously mordant type, or, in the case of ‘Breaktime’, a truly hilarious advertising satire on the subject of dingleberries. To be honest though, the distinction between skit and tune is a matter of degree here; humorously indirect self-deprecation is the order of the day here. However, it’s not what I’d call a comedy record; rather, it’s a hip-hop album made by someone with a pronounced sense of humour. This, as far as I can tell, is the real Iz-Real: if you were to spend time hanging out with him, he’d be taking the piss (as we say in England) just as much as he does in his music. Again, as with the album reviewed above, a token of its sincerity is its sheer creative range: funny as they may be, the lyrics are crafted with the kind of detailed focus that can only proceed from a profound love of language, and the various producers that contribute (all namechecked in ‘Un Dia (He Iz)’) supply a grab-bag of ballsy, creative and erudite beats. Sure, it’s funny, but not being funny is just what insecure people do to show how important they are; this is art, impure and complex. Iz-Real goes by Lukey Cage these days, in case you want to dig deeper; if, like me, you’re a sucker for a total commitment to creativity and artistic independence, you’ll want to.

I like to maintain a certain degree of critical distance; I don’t review things I’ve paid for, and I very rarely solicit materials for review, although I often review music I love, from artists whose work I follow closely, my thinking being that if I’ve already parted with my hard-earned for something, then I can hardly lay claim to any kind of objectivity. And obviously, for the same reason, I would never review something I’d contributed to creatively. Poor Man’s Blues represents pretty much the closest I’ve been to anything I’ve written about publicly. I didn’t play on it, and all of its arrangements are entirely John Poole’s, as he’s the sort of composer who knows how he wants something to be orchestrated by the time he’s worked out how it ‘goes’, but I did play six of these twelve songs with him on a lot of gigs, and we were working on another of them when the band we were in imploded. I’ll do my best to describe the album, and leave it to the reader to work out if it’s their sort of thing, but I may as well say straight off that I love it, and that several of its songs are so deeply ingrained in my musical consciousness that they feel like a part of me. Poole kicks things off with the title song, one I never played on back in the day: it’s animated by a funky chordal guitar riff reminiscent of Keith Richards’ blocky five string approach, and establishes one of the recording’s stylistic touchstones. The blues, as filtered through the British 1960s underground, is one pole; the other is the Celtic tradition, as manifest in the creative fusioneering of folk music’s post-purist era. The territory defined by those sounds is a broad one, and Poole populates it with groove and atmosphere. That’s not to say it’s all dominant vamps and modal noodling: a song like ‘Walkin’ The Blind Lane’ showcases a footsure instinct for the narrative power of tonal chord sequences, and truth be told there’s no noodling at all on the whole album. This is a man who’s been around the block a few times musically, and his experience is telling, in the disciplined precision of his arrangements, and the erudition with which he musters the resources of the music that’s influenced him; hints of Zappa, and stronger ones of Steely Dan are abundant in the funky and cynical ‘Pain Academy’, for example. Poole makes extensive use of the talents of Jon Potts and Graham Pike, both extremely able multi-instrumentalists, the former particularly dazzling on violin, the latter on keyboards and harmonica; his own guitar playing is never flash, but it’s always melodic, soulful and propulsive, and his chord voicings are richly evocative. John is a multi-dimensional writer and arranger, his range encompassing the sincerity of ‘The Other Side’, his valediction to Jerry Garcia, the threatening lyricism of ‘Someone Looking Out For You’, the sour disdain of the aforementioned ‘Pain Academy’ and the spine-tingling mystery of ‘Jack O Lantern’ with ease and conviction. You’ll find few more self-effacing musicians (there isn’t even a link for me to put at the top where you can buy the album directly!), but Poor Man’s Blues is a distillation of many years listening, performing and writing by a very active and perceptive musical mind, and a fundamentally generous creative spirit. You’ll find few truer or deeper expressions of the potential of the last few decades of popular music. So yeah, he’s my mate, and no, this isn’t an exercise in stylistic novelty, but I’m pretty sure I’d think the same of it if I didn’t know him. John Poole has hit the nail on the head with this one.