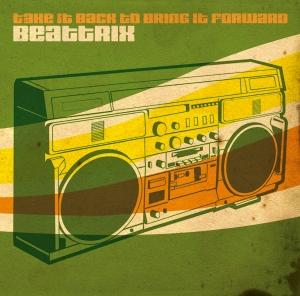 ‘Our story of music begins in the dim distant past,’ announces the sample with which this album commences; it’s followed by a boom, and shortly thereafter, by a bap. This is twenty-first century music, today’s music, produced with today’s tools, with a sound that is distinctly located in the now, but it situates itself proudly in a tradition that will always be associated with the nineties. Everything about it is funky, bouncy and brash, and it roams freely over the last fifty years of popular music history like a wayward stylus. Coherence can be an elusive quality on hip-hop albums, especially when they feature a large cast; those that are produced by a small coterie on both the production and vocal side of the equation usually fare the best, but even then it’s no easy matter to forge a singular, identifiable voice. A recurring vocal performer can serve to unify a set of tracks by different producers, even if the sound is pretty heterogeneous, but Beattrix has pulled off a slick manoeuvre in making a diverse selection of beats, blessed by a wide variety of emcees, sound very distinctly like one album, animated by one creative force.

Without knowing something about his working methods (and I have to admit to being pretty ignorant about the nitty-gritty of hip-hop production generally), it’s hard to know exactly how much of this is down to Beattrix, and how much to his vocal collaborators, but the tracks on Take It Back To Bring It Forward sound like they were composed and recorded in the round. It’s very common to hear a lyric slapped on a beat, like a holiday snapshot clipped thoughtlessly into a mass-produced photo frame, which can make the most individual and bespoke of creative utterances sound generic, notable mainly for the extent to which it doesn’t clash with its context. These tunes are at the opposite pole, their grooves and flows dovetailed perfectly together, samples and sonic references bouncing playfully around the lyrics; it may well be that they were made in the usual manner, without deejay and emcee ever breathing the same air, but they give every impression of being fully collaborative efforts.

The energy level is high throughout, and the rhythms are frenetically syncopated, topspin driving the listener along irresistibly; all the emcees flow with the kind of cocky assurance that makes even a confession of weakness into a proclamation of strength (like Figure Of Speech on ‘Black And Blue’). The razor sharp Sam Otis kicks things off with ‘Young Gifted And Bald’ and sets a high bar for the voices that follow him; they all rise to the challenge, but none of them trump him. In fact, no-one’s trumping anyone here, because one thing these vocal performances have in common is sincerity; none of the emcees are pretending to be anything other than themselves, and that’s really all any artist can aspire to. There’s humour, self-deprecation, a certain amount of gritty hard reality, but what really ties the whole thing together is attitude; these artists know they’re good, and they’re working in a field where the charisma that comes with that knowledge is a prerequisite to a convincing performance, but there’s also a sense of humility, and a commitment to making entertaining, sincere, honest and exciting body music. Beats like these, with their artfully curated concatenations of groove and texture, decorated with sometimes jaw-dropping cuts, can carry a dancefloor in their own right, but when they’re blessed with bars like those Wez Cooze and Nobsta Nuts contribute to ‘Can’t Do It Like Me’, they are absolutely unstoppable.

The producer’s art is to make records, and given that this album has a producer’s name attached to it, we have every right to give Beattrix the blame or the credit for everything we find on it. All of his collaborators deserve their props for their contributions, but ultimately it’s all down to him: whatever is on Take It Back To Bring It Forward is there because Beattrix decided to put it there. That he is also responsible for constructing much of it could actually make that curatorial/ editorial function a more challenging one; critical distance can be an elusive commodity, but it’s much in evidence here. The performances he’s elicited from the emcees are all written in the same ink, and whether that’s because of how he chose his collaborators, or what he asked them for, or how closely he worked with them, I can only speculate. What I know is that the coherence of the whole finished article can’t have come about by accident. There’s a ruthlessly clear creative vision behind the album, one that is capable of marshaling a whole range of resources in the same way that a movie director has to; beats, cuts, samples, lyrics and flows all work together to drive home a single point. If you want to know what that point is, you’ll have to listen to the record, but I can reveal that it involves creative autonomy, personal responsibility, the pleasure principle, truth, social awareness and hip-movement, and that like all good art, it’s much too specific for some lame critic to paraphrase it in a way that means anything. I’ve listened to this record a lot over the last couple of weeks, and I have no intention of stopping now, because it contains some of the most enjoyable music you’re likely to hear.