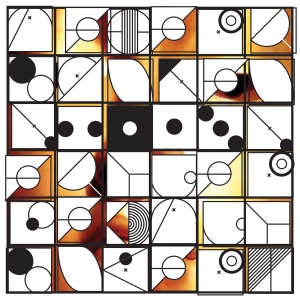 Buke And Gase armour themselves in symbols; the inquisitive listener’s eye, probing the album’s packaging for keys to the music’s meanings may find some affective affinities between its appearance and the sound (that’s a matter for their own aesthetic conscience), but its gaze will be reflected, denied admission by the obviously meaningful but unyielding glyphs that adorn it. The duo have announced that clues to assist in the decoding of their bespoke graphical alphabet will be meted out on their website once the record is on general release, but in fact everything you need to crack the code is right there on the cover (I have to thank my daughter for spotting the album title, from which everything else fell into place). I’m not about to issue any spoilers, but suffice it to say that what is revealed is another layer of symbolic obscurity. Of course this is just as it should be. Any impression listeners may get from more conventional album art that they’ve been given ‘the true meaning’ of the music is spurious: the point of Buke And Gase’s allography, and the sense that it obscures, is the experience of looking at it, decoding it, puzzling over it, ingesting it just as the music is absorbed. If the meaning of a work of art could be written down in dry prose there would be no point to it. In point of fact, the music, though innovatory, conforms far more to a recognisable vocabulary than does the cover (although a visual debt is acknowledged to Sol LeWitt and I can certainly see echoes of the surface geometries of his construction Tower, for example). I would surmise that the intent is to frustrate the usual, often lyrically focussed search for obvious denotations in the songs, but who knows? Maybe they’re just fucking with our heads.

The sound itself is composed of textures from the language of rock, but consistently refuses the conventional tropes of that tradition; its rhythms, though articulated through sonic elements such as percussion and distorted guitar, are never spelled out in conventional rock grooves, and except in ‘My Best Andre Shot’, the percussion always operates in a homorhythmic relationship to the chords. Although the studio puts them at liberty to do whatever the hell they want, this is an artifact of their performance practice as a duo, where the percussion is operated by both players’ feet. And although the primary timbral material of their arrangements is an electric guitar sound, there’s more to it than that. The clue’s in the name.

The ‘buke’ is a modified baritone ukelele, while the ‘gase’ is a ‘guitar-bass hybrid’. Both make sounds that could easily be mistaken for a regular guitar, although I would have been imagining some kind of hokey lipstick-tube pickup affair plugged into a pretty lo-fi amp set up; but the creative autonomy implied by the deliberate re-shaping of their toolkit is as evident in their song-making (and indeed their alphabet inventing). This is a performing unit that takes the idea of DIY not as a license to do for themselves what a traditional label might once have done, but as a basic credo that underpins their entire practice. In some sense, notwithstanding the inherent intertextuality of every utterance, General Dome is an exercise in recycling. That’s not to suggest that the inevitable repetitions of other musicians’ work should be seen as plagiarism; the territory of rock’s vocabulary is too well travelled to avoid such echoes without ceasing to make rock music, and Buke And Gase are unusually creative in the uses to which they put their found materials, physical, visual, sonic and artistic.

The sound of their two amplified instruments intertwines in a copia of solutions to the problem of arranging for such an idiosyncratic ensemble; throughout, the two instrumental voices are recognisable and distinct, although they make extensive use of signal processing to warp and destabilise their sound. This consistency of orchestration is an effective strategy, often employed in styles with a more conventional approach to musical aesthetics, such as jazz or Celtic folk music; it serves both to emphasise the performers as players, as musical technicians, and to divert attention away from the orchestration as a source of detailed, specific meaning, demanding the listener attend to what is different about each tune. Buke And Gase make a relatively traditional set of songwriting values the site of their principal efforts. For all that the music is experimental in many ways, General Dome is also a collection of accessible and engaging pop songs, with catchy melodies and exciting dynamic narratives. Arone Dyer’s swooping and inventive vocal melodies, along with her honeyed voice, make the songs irresistible.

The production displays a great deal of attention to detail, and while the whole album sounds very much like Buke And Gase simply playing their music, it has been recorded and mixed with creativity; there’s a lot of artifice to it, but it never draws attention to itself, serving instead to emphasise the shape of the songs and the sound of the duo. There, as everywhere else, musical meanings are presented with great clarity, and all aspects of the process are placed entirely at the disposal of those meanings, the identities of the players as creative agents disappearing almost entirely into their personas as performers. And that really is the reason for the seeming obscurity of their schtick, or at least it looks that way to me, and it would be a good reason; ‘listen to this sound,’ they seem to be saying, ‘look at these shapes. Ignore us, and ignore all the extraneous things you normally think about rock music; just look, and listen.’ General Dome is a very coherent piece of work, that makes it very obvious on every level that its authors know exactly what they want to say, and how to say it.