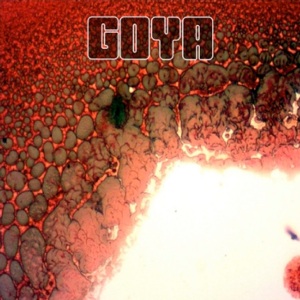 Drugs. Weed, hash, blow, smoke, tea, skunk, green, charas, gear, pollen, bud, sensemilla, kif, oil, dope, black, pot, marijuana, cannabis. I don’t wish to imply that Goya’s music is one-dimensional, but this is very clearly the central inspiration for their creative activities. So much so, that their Bandcamp page is simply addressed with the name ‘marijuana’; I imagine that there are a fair few musicians with similar enthusiasms spitting blood that Goya beat them to it. I wonder if there’s a band called Marijuana whose main inspiration is the last painter to be classed an Old Master? I must remember to form one, if my enthusiasm for making music gets rekindled at any point. Cannabis is a term we’ll return to; let’s turn now to another one. Demo. Or Demo in italics if we take it as the title of this album. I’m moderately confused by the word ‘demo’: of what is this recording meant to be a demonstration? If it’s meant to demonstrate the band’s ability to record the music that’s on it, then it’s a resounding success; but the term ‘demo’ clearly suggests that the music is intended to be a means to an end, a stop-gap measure, a creative holding pattern. A demo is something that a band sends to venues to get gigs, or to labels in the hope of getting signed, and being given the money to make a ‘proper’ recording. Given that some of the best recordings I’ve reviewed recently have been recorded on a cheap, aging, all-in-one digital multitrack (the Meadows side of the Slabdragger/ Meadows split, for example), and that many bands in Goya’s genre are proving the total superfluity of traditional music industry business arrangements, I think they’d have been better off calling this Album (if PiL hadn’t beaten them to it). The CD they’ve sent me just has Goya written on it, and although it comes in a simple cardboard sleeve, in these days of purely online releases there is no physical threshold to album-hood; and more to the point, the recording on the CD sounds in no way contingent, unfinished, creatively tentative, or casually achieved.

Five long songs, or four long songs and one very long song, make up an album that is quite short by today’s standards, but that would fit quite nicely onto twelve inches of polyvinyl chloride. The sound is the sound of copper wire, and triodes in glass domes, the sound of tweed covered cables feeding signals from electric guitars into overheated amplifiers and making them weep in pain. Whether Goya actually used those methods, I don’t know, because you can achieve a fair approximation digitally, but that’s exactly what it sounds like. The riffs are idiomatically specific doom riffs; the music lumbers with an ineluctable, ponderous inevitability, and its materials are designed to operate at their own comparatively glacial tempi. Just as thrash riffs have a certain form and structure, and notwithstanding that they may sound quite good at slower tempi, can only mean what they mean at the frenzied pace of thrash, so these riffs are particular to the rate at which they mark out time; the contours they describe accumulate momentum like a brawny arm raising a blacksmith’s hammer, and they need the time that they take to accumulate it. Where thrash riffs whizz in through your ear and unfold their meanings retrospectively, pulling the listener along irresistibly behind them, these riffs are rear-wheel-drive, pushing from behind, giving you a note and leaving you gagging for the next, their ultimate sense ambiguous until their final resolutions.

Not everything is so geologic; but the faster material harks back to the bluesy roots of metal and hard rock, its agility unexpected beneath sedimentary laminations of dirt and grit. The weight of this music is not conveyed through a crisp and crunchy, heavily compressed, highly tweaked production; new extremes of heaviness have been achieved through such methods, particularly since the advent (and huge budgets) of nu-metal, but a record can always be turned up or down. Goya take another common route to the thunderous, and leave the listener with a lot of dynamic range, enough to encompass the sheer, hairy sonic chaos of their guitars. Towards the end of the epic ‘Night Creeps’ the sound layers up spatially, in a way that highlights the visceral commonality between some branches of stoner rock and shoegaze. The vocals are also heard from a considerable distance throughout, in a way that again echoes shoegaze, although it is certainly a typical trope of stoner-doom as well.

Shoegaze has particular reasons for its use of such methods; it pursues effects of distance and anaesthesia because it is nostalgic music, filled with a sense of melancholy longing. Goya, and other stoner-doom musicians, pursue those effects because their music is meant to evoke, and to sound its best under, the effects of cannabis. This music is heavy, and intense, like industrial machinery, but it is somehow simultaneously a haze; it is a drifting, enveloping fog of grinding and crushing equipment. There is a contradiction inherent in that combination of brutal intentionality and aimless, de-focused jouissance, but it is not a contradiction that undermines the aesthetic coherence of the music; on the contrary, it’s what makes it. It’s the exact analogue of that urge to burn bucket after bucket until the sun comes up and you achieve a temporary liberation from all sense of self (and all memory of… well, more or less anything). It’s that unification of the hunger for oblivion and the desire for illumination that animates the heart of every hardcore dope-fiend; this is a soundtrack for the exploration of particular, fragrant, pulsating regions of inner space.

I believe it takes a certain amount of attitude to make music like this; I can remember, in my almost un-rememberable youth, sitting for hours with a guitar and amp, just getting off on the sound of it. Not in a nerdy, musicianly or (heaven forfend) constructive way, but just in sheer bodily delight at the awful, grinding ecstasy of the sound and its effect on my person. To have taken that to the stage would have required a great deal more self-belief than I then possessed, because we do not live in a world where such experiences are widely valued, or regarded as worth sharing; it’s very pleasing to me that there are musicians around the world who are ready to say ‘fuck it, this is really cool, let’s put it out’. Stoned music has been an important strand in rock since before I was born, and the approach to it taken by Goya, while not quite as venerable as that, is also pretty long established; the value of continuing to make noises in this tradition is there to be heard in the overwhelmingly physical effect of listening to this recording. This is a band that’s committed to their creative practice, and very good at doing what they do.