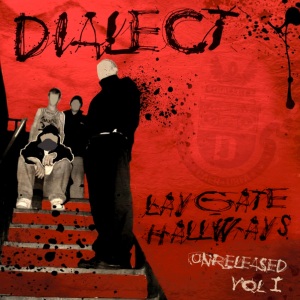 It seems that Dialect have been around for a good while. Even if you’ve never done anything (or nobody’s noticed you doing anything), just being in existence for long enough to release an album of early rarities is something of an achievement. I should like to point out that I’m in possession of some earlier and rarer Dialect tracks than most of those collected on Laygate Hallways, but Chattabox has made it quite clear he’d prefer those not to see the light of day (although I actually like them a lot). So for those of you not fortunate enough to be privy to such ultra-hip obscurities, this album is your best opportunity to hear the early growth of Tyneside’s finest underground hip-hop collective.

Hard as it may be to believe, there have been tracks recorded that could credibly bear the name of Dialect (or Northern Dialect, as they used to be known), for an entire decade. Which is to say, since I was in my very early thirties. Not many people realise that such a distantly historical epoch ever existed, let alone that this crew was making music already. Laygate Hallways compiles tracks recorded between that antediluvian year zero and just before the release of Dialect’s eponymous debut, five years subsequently, tracks which for one reason or another have not been unleashed on the world (other than ‘Metro Man’, which is available as a single).

‘Now which daft cunt wanna step?/ Now which daft cunt wanna mess?’ the boys politely enquire on the opening cut. Not me. There’s a rawness and aggression to much of this material, a ragged edge where later material develops a self-confident swagger; there’s a sense of direct confrontation where more recent releases are audaciously oblique, or humorously self-effacing. This music sounds hungry, mean and lean. Beats verge on minimalism in their simplicity, while the production is sparse and disciplined. While many devoted fans may harbour suspicions that this crew is composed of essentially nice, friendly lads, you wouldn’t want to push your luck with the collective persona they present here. Tight and funky, bursting with raw talent, but balanced right on the knife edge between sharply analytical and dangerously unhinged, these tunes issue challenges and state subject positions like lines in the sand.

Dialect’s lyrical praxis is notable for the way it combines a viciously humorous, trash-talking bravado with a keen sense of the political and a concern with the detailed grain of personal experience. Hip-hop is usually either fun, or ‘conscious’, but Dialect is both, and from listening to Laygate Hallways it’s clear that’s always been the case. A track like ‘Plan Your Escape’ is an overt and melancholy representation of the dystopia of urban unemployment, but the above mentioned ‘Metro Man’ is about as incisive and insightful an account of the politics of daily existence as you are likely to hear, as well as an accurate assessment of the theatre of political agency available to its authors (if they didn’t make hip-hop, anyway). And all that while making you laugh, and dance.

Dialect has been the name attached to some very fine releases since these tunes were committed to hard disk; for me they represent the bleeding edge of traditional hip-hop practice, and there is something about the way they exploit dialect that is the acme of verbal ingenuity. This is some damn’ clever stuff as well, from the sample selection, through the production to the performances, and while it lacks the polish and the chilled-out viciousness of their later work it has an energy and commitment that hits hard where it counts.