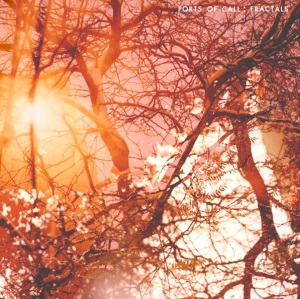 Bass and drums provide Fractals with a spare and sturdy scaffold, from which they hang their shimmering banners of translucent, liquid sound. There are vocals, with audible lyrics, but for me they function similarly to the guitars, as a textural element: reverb returns are often separated in the mix from their sources, vocal or instrumental, but the effect is usually so wet, so expansive that it overrides the ‘literal’ dry sound. This is a music of soundscapes: it’s something of a cliché to talk about ‘visual’ music, and people often do so without being clear what they mean, but there’s an aspect to Ports Of Call’s atmospherics that seems to set neurons firing in the visual cortex.

It’s ironic that terms like ‘shimmering’ ‘translucent’ and ‘liquid’ should spring to mind: these sounds, like the shoegaze from which it draws some noticeable inspiration, express a sense of clarity and lucidity using musical materials that are confused, chaotic, and sometimes downright abrasive. There’s a ridiculously heavy distorted guitar lurking on the left of the soundstage at times in ‘Selective Memory Machine’, but it is so buffered with its own reverberations, and so submerged by everything else’s, that it works like a soft pad, engendering similar floaty feelings to a choir pad preset on an old FM synth.

Not everything is hazy dreamscape: ‘Transparent Apparent’ has a positively kinetic feeling to it, and the guitar has a rhythmic clarity that is at times emphatically stated, even through the washes of reverb. Melody is as important an element as harmony, both in terms of its compositional prominence, and its net contribution to the mood of the music. ‘Ballinora’ curiously reminded me of Springsteen’s ‘Dancing In The Dark’, both in its melodic contours, and in its big, beaty 1980s style groove.

This is the sort of recording you can forget to listen to (especially as it’s so short): its five songs whizz by so quickly, and its production is a masterclass in sonic integration, so that elements and and sounds that might be considered quite radical come across as natural. This music doesn’t set out to surprise, but deliberately creates spatial, habitable fields of inviting sonic texture. Should you remember to listen closely, however, you will uncover layer upon layer of processing and creativity, mediating what would otherwise be some pleasant, but relatively conventional guitar pop songs, into a sequence of moods so encompassing that it’s hard to remember why you feel the way you do as you listen.

No two people will hear the same piece of music the same way, for which reason I am usually wary of telling my readers how a track will make them feel. However, for me, this music is all about the specificities of its emotional affect, so I should at least try to tell you how Fractals makes me feel. The effect was to make me feel a little disconnected from reality, floating and protected as though surrounded by cotton wool. However, it is by no means an anaesthetic effect: the part of your attention that’s freed up by the music’s obscuring of the wider world can be readily put to use in contemplating the swirling, psychedelic forms of the music itself. The sound of the songs somehow buffers the consciousness, like a euphoric drug: when the EP has played out, and you return to your usual mode of listening, the world seems quiet and calm, with the glowing beauty of the music informing your response to the sounds of the everyday.