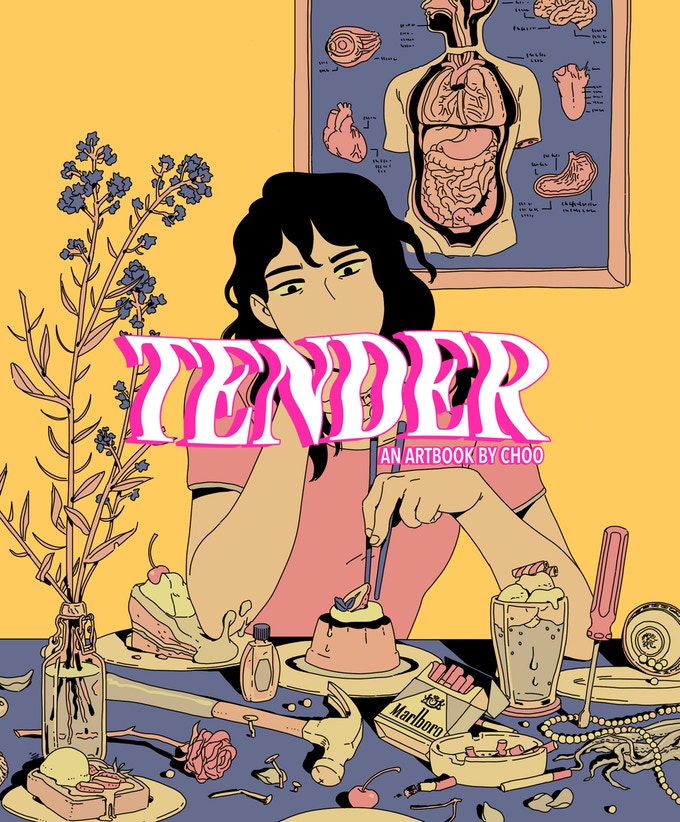 Illustration is a word that usually implies instrumentality, a visual work that’s auxiliary to something else. More broadly, you might illustrate a point, which implies one utterance in support of another. But illustration also suggests an approach to drawing (or potentially to any kind of picture-making) which locates its meanings in the objects it represents. This is what used to be called narrative art, back when art-historians were theorising a new wave of practice predicated on the artwork as an object rather than a representation. Narrative is a good word to consider when thinking about Choo’s drawings, because the juxtapositions of figures and objects in her pictures almost always suggest some outlandish or disturbing scenario, but any picture of an object is effectively narrative. It’s the story of a form in space, existing through time.

Some of the images in Tender show simple objects: hammers, tins of luncheon meat, lighters. But most have some clear narrative interpretation, and even those simple objects are shown in ensembles which beg questions. Was the switch-blade used to half-gut that fish? How can the rope and the die be used to cook the celery and the prawn? Is the tiger chasing the comb, or the fish shaped soy-sauce bottle? Whose eyeball is that? Much commercial illustration is in the business of providing answers to extrinsic questions, but in art, which is to say work whose meaning and function are collocated with the experience of its presence, questions are far more fruitful.

The book is divided into sections entitled ‘Girls Girls Girls’, ‘Horned’, ‘Edible’, ‘Fan Art’, ‘Original Characters’, and ‘&’. As a white, hetero male (however provisionally I own those adjectives), it is never a good idea for me to look at decorative or sexualised images of women without considering the terms of engagement. The terms here are defined by Choo’s eye, which is the vehicle of a queer woman’s gaze, and that first section is filled with an unabashed, horny pleasure in the forms of women’s bodies. These are shapely, young bodies, often glistening with moisture, scantily clad, and provocatively posed. Sometimes they are arranged in decorative fields, like elements in a wallpaper pattern, in one case interspersed with a variety of mushrooms. These are the sorts of visual uses to which women’s bodies are often put by men, and to see them deployed in this way by a woman, for a woman’s gaze, is thought-provoking.

These bodies are objectified: they are the objects of a gaze, and they are sexual objects at that. I think it’s worth considering that it is not objectification in itself which is inherently coercive: I would argue that we would find it very difficult to function socially were we to treat other human beings exclusively in the round, as complete individuals. It’s expedient to deal with them as social objects, as economic objects, as administrative objects, even as psychological objects – still some way short of dealing with someone as a person – and yes, as sexual objects. These images are a joy to look at, their modelling making them seem tangible, their toes and hands sometimes curled expressively in pleasure, their facial expressions nuanced and varied. They’re sexy.

More often than not they are clutching knives and splattered with blood. One girl in the first section is a goofy-looking vampire, seen chewing on entrails, clutching a dismembered male forearm, and drinking blood from a transfusion pack. In the ‘Original Characters’ section there are a good number of images showing a couple called Mei Wing and Mikhail, she pretty, tiny and skinny, he a burly beefcake. They are shown in various prosaic situations, for example in their messy kitchen, which has intestines strewn across the floor, and a severed hand lurking amidst the clutter on the table. Choo herself traces this aestheticisation of violence to watching Tim Roth gradually bleed out over the course of Quentin Tarantino’s Reservoir Dogs, some images from which she includes in her ‘Fan Art’ section. In the introductory interview with publisher Zainab Akhtar, Choo seems faintly embarrassed at her liking for such imagery.

I’m not sure why explicit gore is such a popular aesthetic, or why it is usually gentle, non-violent people that enjoy it, but I don’t think it warrants any apology. The aesthetic is inherently violent, an act of coercive identification which reduces the meaning of a person or object to a form of instrumental value; and the things which are considered appropriate to aesthetic representation are very often disguised representations of violence. The pretty, powerless woman, available to the aesthetic precisely because her power has been forcibly and coercively alienated. The handsome, powerful man, the converse of that image. The brave soldier/policeman. The phallic automobile. The flower, cut off at the stem. When blood and gore is introduced to beautiful images like those drawn by Choo, or to the exquisite cinematography of a film like House of Flying Daggers, that visual hypocrisy is exposed. It is also worth noting that it is socially acceptable to show such things, within certain limits, whereas the limits assigned to the explicit representation of sex are the far tighter bounds of the ghetto called porn. One form of transgression may stand in for another.

I for one feel no more moral equivocation over Choo’s gore than I do over her surrealism. She draws clearly and precisely, with an obvious manga influence in her faces, and a precision to her representation of everyday objects that’s reminiscent of ligne claire. She employs carefully chosen and constrained colour palettes, usually with no more than three to five tints in each image, applied in flat blocks. Her hands are large and expressive, delicately modelled and posed with nuanced precision. Inanimate objects are portrayed with rigorous fidelity, almost like taxonomic illustrations. But it is not her considerable skill in draftsmanship that makes her work what it is, although it wouldn’t cohere without it. It’s her choice of objects, human and inanimate, and the complex networks and juxtapositions of association, expression, graphic impact, mass-cultural reference, decorative effect, voluptuousness and stabbiness which they are used to articulate. This is the only sense in which Choo’s drawings are instrumental. They produce meanings which are difficult or impossible to pin down verbally: unsettling, sexy, beautiful, disturbing meanings which ask you to look at the everyday in new and mischievous ways.