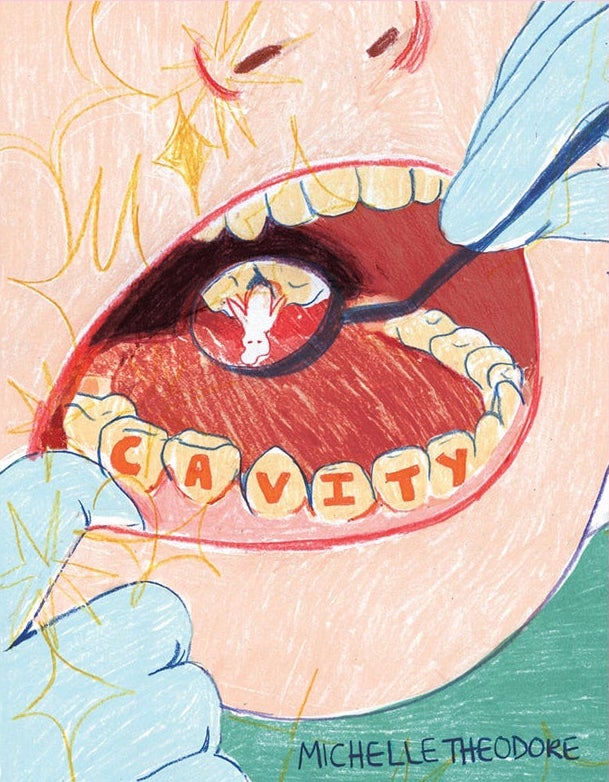 I was initially underwhelmed by Michelle Theodore’s Cavity. Where were the insights? Where was the peek into an unfamiliar experience? Where was the pleasure and escapism? Then I re-read it, and realised that I had resisted its affect and dismissed its perspicacity because the subjective experience it represented was so familiar to me – precisely because it was so faithfully and convincingly rendered. And to be honest, the feelings it represents, and offers to evoke in the reader, are ones I usually prefer to deny.

Very simply, it’s a comic about depression, about the way that a single question can be magnified out of all proportion by the cognitive distortions peculiar to that state, and about the way, conversely, that clearing a single blockage can restore a stuck heart to motion. It also dramatises effectively the way that ones illness can seem to become a competing personality, a strategic agent with goals of its own. The depressive cycle of social isolation, low-self esteem and inactivity, each spoke of the wheel reinforcing the others, is one with which I am intimately familiar, and so, clearly, is Theodore – either that or she has had some very detailed conversations with someone who is.

Theodore deploys a sketchy, simple art style, and lays her pages out with a gentle, regular rhythm. The language is equally straightforward, and the drama is all between two characters, who can’t really be differentiated, for reasons alluded to above. There is a central conceit, which you can have the pleasure of discovering for yourself, in which one narrative element becomes personalised as a symbol for the protagonist’s struggle with their mental illness. This is not an excessively clever or difficult notion however, just an uncomplicated technique to make drama out of what is usually a solitary pursuit. It was, for me, effective. At least, once I’d got past the stage of dismissing the whole thing out of hand for being incredibly obvious.

I have dealt with this illness, and I’m largely able to pretend that it’s not an issue for me. It does recur though, if much less frequently and severely than it once did. This is probably why, on first reading, I felt like there was nothing there. My response was ‘yeah, yeah, yadda yadda yadda, I know all this already’, not because the insights Theodore offers are commonplace, but because I generally prefer not to be reminded of them. However, on reflection, and especially for the many people who have not been able to develop strategies to deal with this illness as successfully as I have (on the whole), this story is an important validation of an experience which is rarely shared. For those who have not known it, it may be of some help in understanding the aporia which it presents to its sufferers, and for those who do know it, a big part of the problem is feeling that nobody else shares the experience. I’m grateful to Theodore for tackling an issue which, by its very nature, is hard to communicate, and exposing it to view, with humour and compassion.