The silver Swan, who, living, had no Note,
when Death approached, unlocked her silent throat.
Leaning her breast against the reedy shore,
thus sang her first and last, and sang no more. 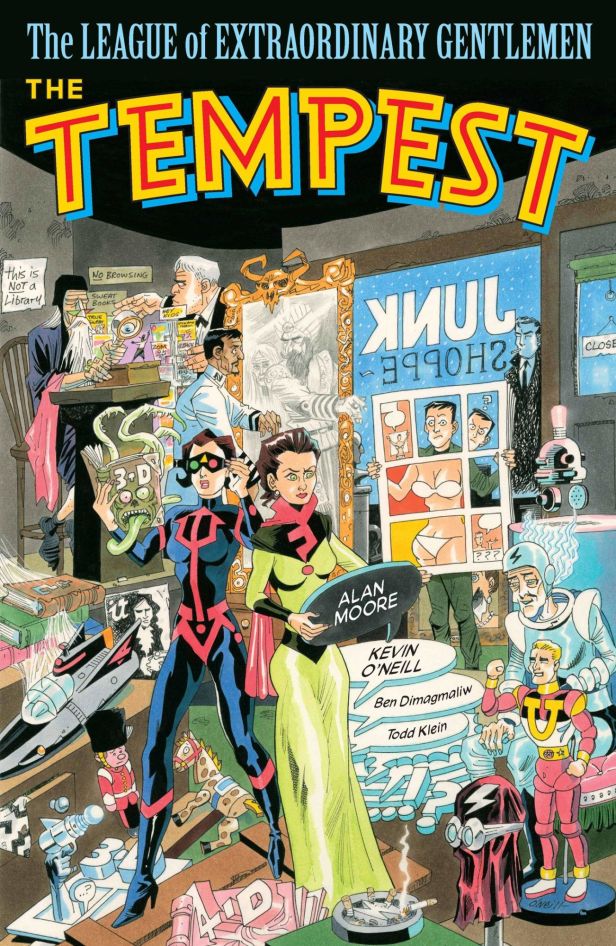 Clearly, during the course of his career writing comics, Alan Moore was far from silent, so it would be sublimely ludicrous to refer to The League of Extraordinary Gentlemen: The Tempest as his swan-song. He has however, along with his collaborator Kevin O’Neill, announced that with the conclusion of this last run of LoEG he will retire from the medium in which he learned his trade and made his name. O’Neill, whose oeuvre in recent years has seemed rather less prolific, is one of the great stylists of British comics, among the artists that were given their head in the early years of 2000AD, and made it one of the world’s most visually diverse and exciting comics. His work on LoEG has been rather less overtly bizarre than much of his output, but he has been among the most accomplished and distinctive of visual world-builders, and once had a story banned by the American Comics Code Authority on the grounds that they found his style objectionable! With this final curtain two of the defining voices of English language comics exit the stage, having rearranged the scenery beyond all recognition.

Looking at LoEG for the first time as a whole, it appears to be a part of the same project as Moore’s gargantuan novel Jerusalem. Although neither work would be adequately summarised by a list of their most prominent themes, both share an understanding of narrative (and time) as a spatial, geometric structure, and a psychogeographic approach to the relation between place and experience; most importantly however, in my view, are the parallel assumptions that ordinary people are more to be valued than heroes or celebrities; and that obscure or forgotten stories are more to be valued than well-known ones. Moore mines the archives of comic books and fantastic fiction to populate the pages of LoEG, the way he mined the archives of his native Northampton to populate Jerusalem, recovering forgotten heroes from obscure mid-century comics, and obscure characters from the books that enlivened forgotten childhoods.

The plot of The Tempest is playfully reflexive, as Prospero unleashes a cataclysmic outpouring of mythological characters on the world, forcing the protagonists to escape to a space station in the Oort Cloud – this is of course what Moore has already done to his world, and while it may be a mistake to interpret the story as too literalistic an allegory, one suspects he might not see the ending as such a disaster (even when he and O’Neill are thrown out of an airlock). Moore seems determined to exit from storytelling in this medium by putting almost the entirety of fiction into his final work. Prospero, who turns out to be the ‘fairy feller’ of Richard Dadd’s most famous painting, and who is possessed of a very impressive beard, in common with a certain well-known writer, brings to fruition Dadd’s prophecy that ‘…a torrent of fiction shall engulf the globe.’

Whether or not we choose to take the plot of this last instalment as an allegory for the writing of the LoEG, it is an extremely entertaining frolic through the garden of Moore and O’Neill’s minds. The contempt in which they hold James Bond is hilarious, and it’s very satisfying to watch Emma Peel of The Avengers giving him his comeuppance. Members of a retired superhero team are forced by events to come back into the fray, in a manner strongly reminiscent of Watchmen – which Moore would doubtless have brought into the story if not for the well-publicised ownership issues which fatally soured his relationship with D.C. In fact, although Halo Jones or Swamp Thing, for example, are not here in image, they are very much here in spirit, and one might surmise that the project of which this short series of comics is a part is one that also encompasses the entirety of Moore’s production. He has not missed the opportunity to make this last outing a summation and commentary in respect of his career in comics. Also present are his friends Michael Moorcock and Iain Sinclair, in the guise of two of their more memorable characters.

While the vast and serious (albeit very funny) Jerusalem might be taken as an intellectual synthesis of all the themes that Moore has developed through his various works – one largely misunderstood by the mainstream critical establishment – The League of Extraordinary Gentlemen can be understood as a conglomeration of all the fun he’s had along the way. It is so densely allusive that nobody but Moore himself will ever notice all of its references, and some of the minor characters he resurrects lived for no more than a single issue sometime in the 1940s. It’s entirely possible that he’s invented some of them, in the kind of metafictional double-bluff that I would definitely have indulged in if I had been imprudent enough to have been Alan Moore. As is made emphatically clear by the introduction to each of the six issues, Moore and O’Neill are comics fans. Not the contemporary sort of internet-age ‘fandom’ members, uncritically and slavishly devoted to certain intellectual properties, but the old kind of stamp-collector-type fans, who seek out every nook and cranny of their chosen field, and know the bad and the good according to criteria integral to their interest. This is their valedictory fan letter, and it is as irreverent, as intelligent, as critical, as audacious, and as impudent as it is affectionate.