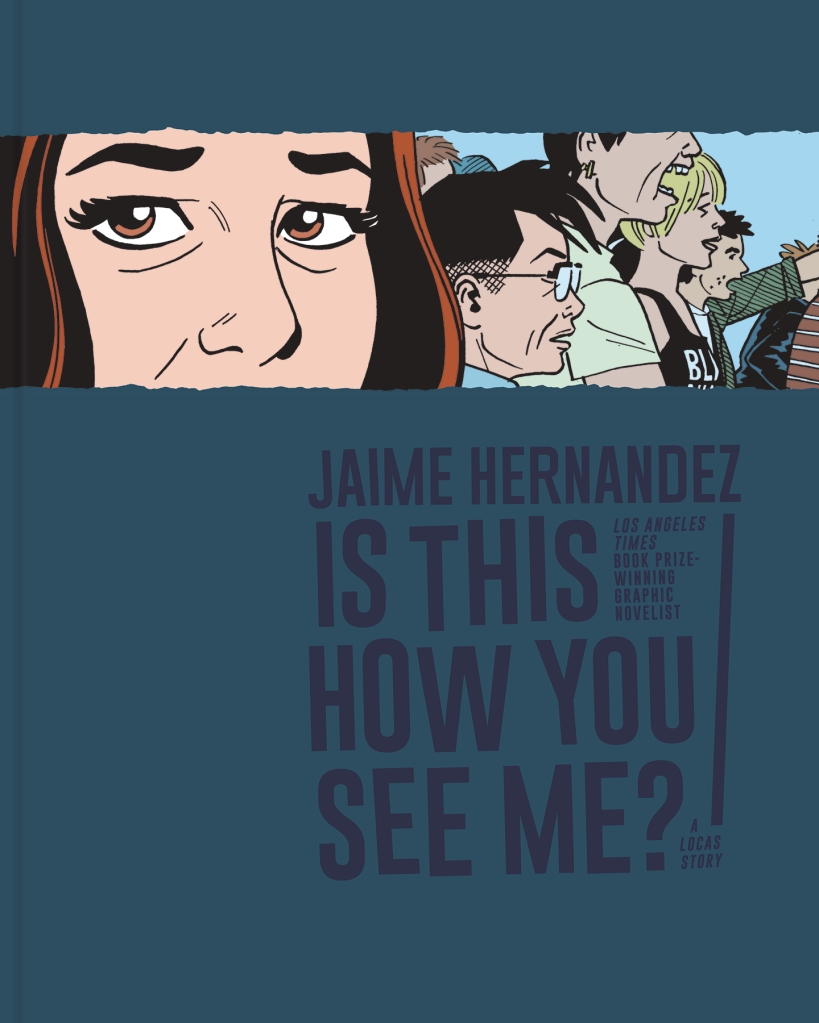 Jaime Hernandez often uses techniques that seem cinematic; in fact they are no more proper to cinema than they are to comics, but some narrative tactics are available to both fields that have no direct analogy in other story-telling media, known in cinema by terms such as framing, focus, depth of field, camera distance, and so on. They may have their own terms in comics studies, but I’m not aware of them yet. Camera or viewpoint distance plays an important part in Is This How You See Me?, the latest instalment in the long running Locas sequence from Love & Rockets.

Hernandez’s characters appear older in close-up; at a distance, some of their detail disappears, and they look closer to the way he drew them in the 1980s. This effect relates to their own subjective experience of the past, whose distance erases detail and transfigures its images with the beauty of youth. The narrative present ticks by with a regular eight-panel routine of daily detail, the prosaic grit that makes it particular, but in flashback the layouts are more open and more variable, more expressively responsive to the events of the narrative, and although the present-tense drawing is no less beautiful, there is perhaps something more deliberately aestheticised about the imagery of recollection.

A comic strip can’t really represent the past, in the sense of something which is not present: both ‘now’ and ‘then’ have equal presence on the page, and this variation in layout opens a space between them, within the inherently historical domain of the page. I say ‘inherently’, because the narrative present can never be present in the way that the experiential present is: instead it is present as something already done, fixed in place with printer’s ink, another facet of the past – the whole strip is a recollection, a trace of some days that Hernandez spent in his studio. This might seem a glib and irrelevant observation, but recollection, and the irrecuperable character of what is recalled, are the central themes of this story.

At the centre of the work is the archetypal act of social recollection, the reunion. Various characters from the long history of the strip gather for a punk gig in Hoppers (what the locals call Huerta, Hernandez’s fictionalised version of Oxnard, north of Los Angeles), featuring fictional bands with names that still live in my memory, as a long-time reader of Love & Rockets, with the same kind of resonance as real ones. Old relationships and tensions are rehearsed, reiterated or revised, and characters recuperate their individual experience from their collective history, a chronicle written in living memory. Not for the first time I am struck by the contrast with W.G. Sebald, the unsurpassed prose poet of memory: Sebald’s narrators remember in solitude, and recover the experience of whole casts of characters from a documentary archive. This patently melancholy approach to recollection is the structural inverse of Hernandez’s celebratory treatment of memory: in Sebald a society is recalled individually; in Hernandez the individual is recalled socially.

In contrast to the previous instalment of Locas there is no structural rhythm of violence, indeed no clear markers of narrative order, other than the transitions to and from Maggie’s dramatic present-tense and Ray’s reflective narrated interludes, and to memory. While it’s easy to make critical generalisations like ‘this is all about memory’, Locas is always about its characters, characters who have grown and changed in real time for nearly forty years. Hopey, the puckish, skinny punk who was as much at the centre of the early stories as her lover Maggie, returns for her most detailed scenes in a long time; she is no longer the carefree prankster, but a woman threatened by her past, convinced that anyone who knew her in her youth will despise her. Izzy returns as a symbolic, oracular presence, her damage more profound and her surface more enigmatic than any other character – in flashback we see her intelligent, self-aware, morally centred and strong-willed, but how she gets from there to here remains mysterious (the story was told in Flies on the Ceiling, but we’re still none the wiser). ‘You can’t go home’, as Hopey tells Maggie, seems to be a touchstone for this story, but Hernandez’s take on recollection is nuanced, and memory is experienced in as many ways as there are characters – a variability that is explicitly dramatised at the reunion.

In many ways this is a very conventional kind of fiction, in which stable characters are articulated through an uncontroversial form of psycho-biographical causality, but having been writing them episodically for four decades Hernandez has at his disposal a depth of personal history that exceeds anything it is possible to construct instrumentally. The result is a kind of lustre or patination on their speech and interactions which should be apparent even to readers who encounter these characters for the first time in this book. They have a particular, individuated habituality – as though they were stereotypes of themselves alone, enacting clichés that are shared with no-one.

This is also an exact description of Hernandez’s drawing, whose vocabulary of schematic gestures gives an impression of precise verisimilitude even when he describes a street with three lines, and even when he resorts to out-and-out cartooning to represent a comically extreme emotion.  Like his creations, he is deep into his groove, laying out a web of possibilities through the entangled life paths of these old Huerta punks. He is himself an old Oxnard punk, so he knows his material, and his chosen topic – a topic which is memory, recollection, the past and all the other abstract things I’ve touched upon, but only inasmuch as they are manifest in people, and only in the multifarious and peculiar ways that they are experienced. Which is to say, more or less, that his topic is life.