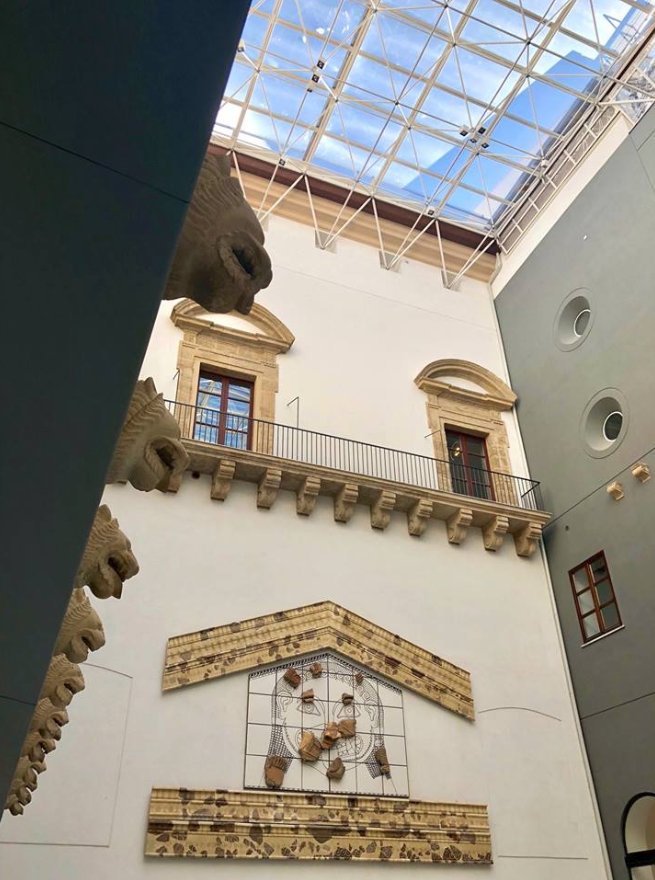 We were welcomed to the (deep breath) Antonio Salinas Regional Archaeological Museum of Palermo by a dole of small turtles, lazing in the fountain in the entrance courtyard, to the great delight of Spawn. Clearly taking equal pleasure in the water and the sun, which they scaled one another to bask in, their happiness was a token of the museum’s prosperity, in a city where few institutions could afford to afford such munificence to any but the most treasured contents of their collections. Of all the sites we visited in Palermo, only the Palazzo dei Normanni was as well-kept as this. I suppose that if you had to choose only two heritage sites to receive funding adequate to their conservation and visitor services needs, it makes sense to single out the centre of Arabo-Norman Sicily, and the incredible wealth of ancient Greek, Punic and Latin archaeology that was donated to this collection by Antonio Salinas and others. But I can’t help feeling that something is lost in the slickness and highly specified facilities of a fully funded twenty-first century institution. The complacency and cultural coerciveness of the British nationals is clear enough to anyone who spends much time in provincial museums, and what, on the whole, we found in Palermo, were sites with comparable cultural value to those national institutions, surviving largely on passion and held together by bits of string. When there is money to spare, there is a sense of disconnection from the local cultural context, of a museum that speaks over Palermitano heads to an audience of Parisians, Milanese, Berliners, Londoners, New Yorkers and others, that is more simply globe-trotting than cosmopolitan.

I can’t comment on the appearance of ASRAMP before its recent refurbishment, which was completed in 2016. It is now finished to an extremely high standard, and possesses a glass-roofed atrium, which has been du rigeur for any museum with pretensions of significance since the British Museum got one in 2000. Its conservation standards are clearly extremely high, which is good to see in a city where many museums can’t afford even that, and there are a good number of well designed reconstructions of fragmentary architectural remains. There are also extensive bilingual (Italian and English) text panels throughout, written by knowledgeable curators or archaeologists, which interpret the objects in helpful and thought-provoking ways. However, as Spouse (who is a museum professional) pointed out, the panels are actually far too prolix, while the object labels are cursory in the extreme, and the effect of this imbalance is to divert attention away from the collection. Instead, if you are the sort of visitor that likes to read what is written, and hopes to undertand each gallery or exhibition as a kind of essay on the topic of the objects displayed, you’ll find yourself reading for twenty minutes, and then looking at some objects as an afterthought, probably without much idea of how they relate to the curator’s theses.

With a collection like this one, that’s a shame, and a missed opportunity. This is clearly one of the world’s most extraordinary archaeological collections, although there are doubtless much larger ones. Sicily was occupied by most of the great Mediterranean civilisations, whose populations absorbed and assimilated the indigenous peoples, and was contested by the Greeks, Phoenicians and Carthaginians, until the end of the Punic Wars, after which the island remained under Roman rule for around six-hundred years. This long, varied Classical era of Sicilian history is the apparent focus of the museum’s collections, or certainly of its displays. There are extensive architectural remains on show, which have been expertly interpreted, often in three dimensions, to give the visitor a strong impression of how it might have felt to be inside the buildings from which they come. There is also a great deal of statuary, much of it beautifully preserved. However, and far more interestingly to me, there is a wealth of material relating to domestic life, such as ceramics, oil lamps, and other items of daily use. And whatever reservations we may have had regarding curatorial priorities, it was all thoughtfully displayed, relaying a narrative not just of Sicily’s material culture, but of the history of collecting and archaeology on the island, which was extensively plundered by wealthy collectors, particularly British ones.

Antonio Salinas was also one such collector, but a local one, and an important archaeologist and numismatist; his endowment accounts for the single largest portion of the objects in the collection, although I have to say that there were fairly few coins on display when we visited. Two other large endowments, and presumably an ongoing acquisitions program, account for the remainder of the museum’s collections. This great wealth of material is clearly and interestingly displayed, but it very rarely departs from the international playbook of the Big Important Museum. Elsewhere in Palermo we saw institutions working in the face of obvious underfunding and neglect, and there was an obvious commitment in the volunteers operating them, as in the many people we did not see working behind the scenes: they are museums with soul, often demonstrating a great creativity in their approach to display and interpretation, and their impassioned belief in the importance of their collections is infectious. I have no doubt that there are many conservators, designers and curators at ASRAMP with an equal commitment to the significance of the objects in their care, but little affective sign of that commitment can survive the bright, flattening glare of professionalism that illuminates this space.