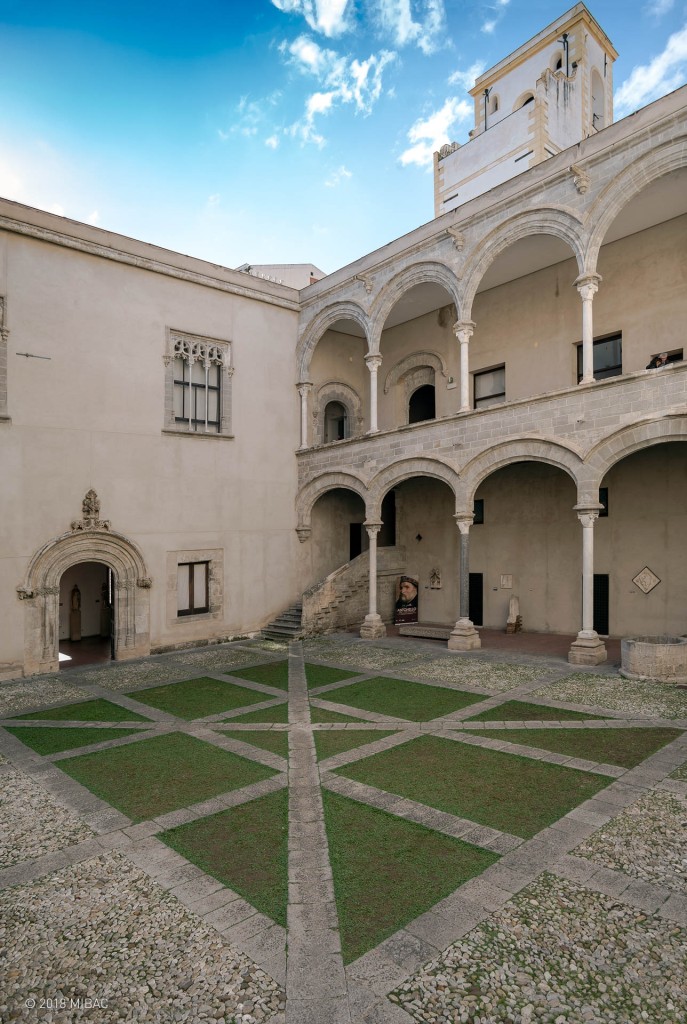 The visible surface of a museum, which is to say its collections as they are displayed, tells you what sort of institution it is. Its description of itself, on the other hand, and the way in which it verbally interprets its collections, tell you what sort of institution it thinks it is. The Galleria Regionale della Sicilia, which is housed in the Catalan-Gothic Palazzo Abatellis, calls itself an ‘interdisciplinary museum’, and it may well be that work goes on behind the scenes which transects the disciplines of art history, archaeology, history, literary studies and particle physics, but as experienced by the visitor, it is a museum of medieval art.

The building itself is an overtly medieval edifice of the fifteenth century, a moment in the history of architecture when much building in Italy already looks like it belongs to the Renaissance. It is heavy, impressive, durable, but also delicate and finely wrought in places. The space is well-suited to the style of art in the collection, its large, cool, dim halls having something of an ecclesiastical feel, in which the predominantly religious themes of the collection seem comfortable – and it did in fact serve as a convent for some centuries. The displays are notably well laid out, each work given the space it requires, all matched to the geometries of the building in ways that showcase their virtues to the maximum. Clearly these museological aesthetics are hindered or abetted by the quality of the art, but in this case the art is very much on the side of the curators. Antonello da Messina’s 1476 Virgin Annunciate is one of those pieces that stares at you out of the past with modern eyes; the face of the Virgin Mary preserves the pensive, self-possessed appearance of a model that da Messina was concerned to represent as a human being, irrespective of the narrative function her image was required to fulfil within the composition. This early in the Renaissance, such realism is startling.

The majority of art in the collection is more representative of the era, an artistic period whose technical handling of the human face lends itself to amusing misinterpretation, and we had a good deal of fun imagining scenarios to explain the strangely mismatched facial expressions of the figures in various biblical scenes. Of course some of what now looks funny is not a consequence of technical shortcomings, but of the artistic conventions of the day, and it is always possible to make remarkable, moving artworks out of the technical and stylistic resources to hand. A good example of this is the dramatic six-metre fresco Trionfo della Morte, which dominates the former chapel, one of the largest galleries. There are other more famous versions of this scene, such as Pieter Bruegel the Elder’s oil on canvas work at the Prado, with which the Palermo Trionfo shares some compositional conventions, but this piece in particular is considered a definitive example of the late Italian Gothic. As in other examples, Death is riding a skeletal horse and killing people, while most of those in the scene ignore the carnage and get on with being sinful. I lack the knowledge to offer a detailed analysis of the work, which is accomplished, but has nothing of the absorbing mimetic accuracy of the late Renaissance; what struck me most was a strange modernity in the handling of certain textures. Of course it’s more to the point to discuss a Gothic influence on certain post-Impressionist painters, and I have no idea if such an influence is recognised, but the way that textile patterns in the Trionfo fill the space available to them, and push forward onto the picture plane, put me in mind of decorative tendencies in early twentieth-century painting. Matisse’s l’Atelier Rouge or Klimt’s Jurisprudence seem to have something in common with this hectoring, beautiful fresco.

For all that the work is clearly hung with care and thought, and that the museum is not obviously falling apart, it clearly lacks the funding for regular redisplays, and the labels throughout are yellowing and typewritten. Paper yellows, and I couldn’t really date the labels by that, but cheap inkjet printers have been around for twenty-five years, and I can’t really imagine that any label produced since the mid-nineties would have been bashed out on a typewriter. I’m probably wrong, but it felt like we’d stepped back into the nineteen-eighties, when such labels were commonly seen in the UK alongside dark brown hessian-covered display boards and leaflet stands full of Shire Albums. Like other sites we visited, I guess that the Galleria Regionale della Sicilia is a victim of Sicily’s hyperabundance of heritage, which couldn’t possibly all be properly funded. In this case, institutional poverty does not detract at all from the experience, however. I’ve rarely seen a better, or more sympathetically displayed collection of medieval art.