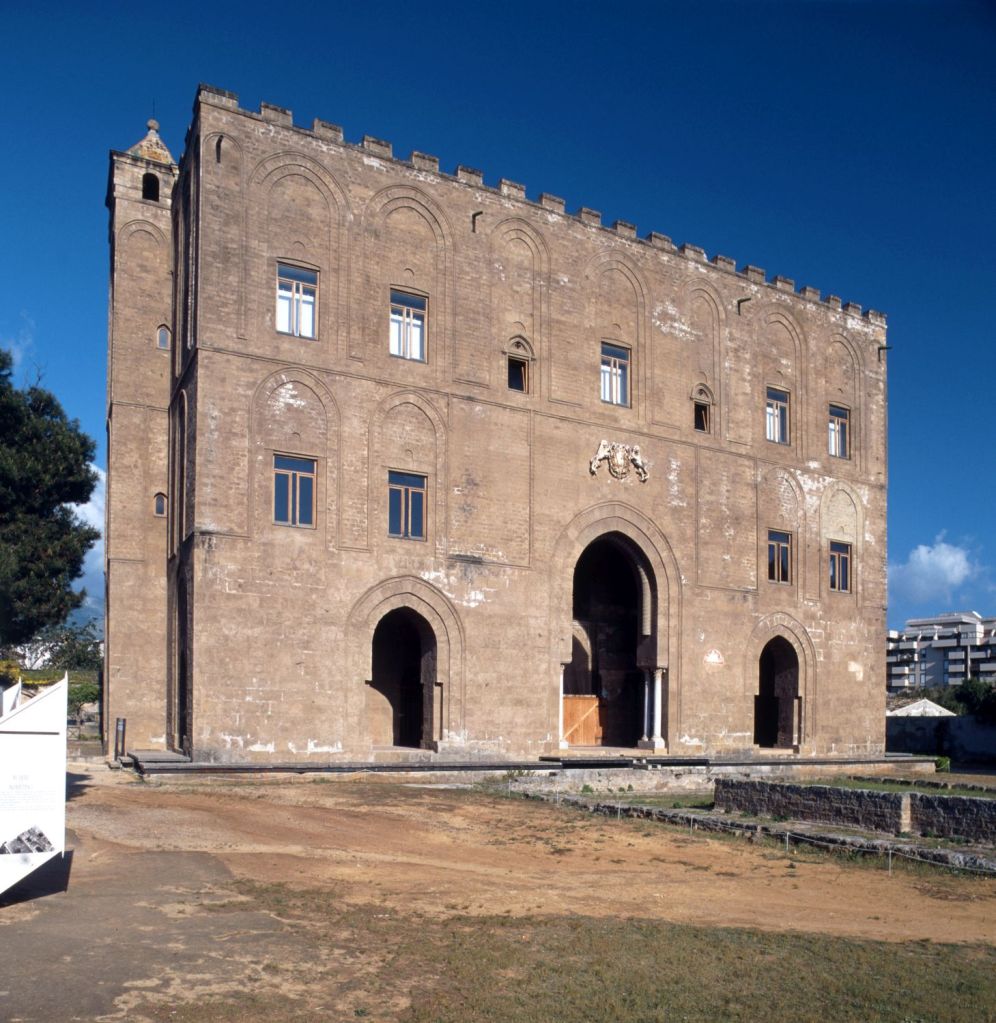 Like the gardens of the Orto Botanico, the formal beds and pathways through which one approaches the facade of the Castello della Zisa are parched, dry and brown. They are not effaced by a chaos of growth, however, but scourged with an excess of order, a ground whose geometries are violated by no figure. Or at least only by transient figures, such as our party, and the beggar and would-be guide who accosted us with great pathos as his dogs played in the stagnant pools of the garden’s neglected water features. Alongside one long edge of the gardens there is a new galvanised steel framework, over which climbing plants might ramble, but… well, they don’t. The entire open area in which the layout of the old garden is reproduced is utterly bare and devoid of any shade or relief. There may be some kind of ruthless archaeological rigour behind this botanical austerity, an imperative to show only what is original, like a medieval chest restored with perspex panels, but I imagine the funding deficit that we noticed elsewhere in Palermo plays a larger part.

Archaeological rigour would be entirely appropriate throughout this fascinating site, whose central building also betrays a certain financial neglect, but preserves and discloses one of the most remarkable cultural fusions ever to enrich the European margins. The Zisa is an Arabo-Norman castle, a happy marriage between the architectural practices of two invader peoples. If it were not unlikely enough that a group of Gallicized Vikings should come to rule one of the strategic lynchpins of the Mediterranean, that they should so enthusiastically and open-mindedly embrace the culture and  practices of the non-Christian people from whom they conquered it is remarkable. As can be seen elsewhere in many examples that exist throughout Sicily, it is not just in the practicalities of architecture for a hot, dry climate that Arabic methods were emulated, but also in the decorative arts used to embellish structures, and by implication in the style of life that would be pursued in such buildings.

The stonework is heavy and blockish, not at first glance radically unlike that of northern Europe’s contemporary stone architecture, but the heavy thermal sinks such walls and buttresses provide are entirely appropriate to Palermo’s climate. Concealed within the mass of the walls is a complex system of channels for the circulation of both air and water, ensuring the continual movement of both through the building, which cooled the interior spaces, while providing a supply of drinking and washing water to the inhabitants. This sophisticated circulatory apparatus, for which there is no better term than ‘air conditioning’, was the product of many generations of refinement in engineering and construction, which the Normans were wise not to ignore. For the English visitor there may well be a moment of wondering why, if they were so enlightened here, were they so uninterested in entertaining native practices when they conquered us… but of course the English were (and arguably remain) savages, who  in their own Imperial era insisted on wearing multiple layers of clothing and stovepipe hats while trekking through jungles. If the Normans were enlightened here, it was thanks to their exposure to an ancient and enlightened cultural tradition, older than Islam, and older than any one group who might lay claim to Sicily.

In times when arguments about the value of a cosmopolitan, internationalist perspective on social and cultural practice, long thought won and forgotten, have been revisited, reviled and broadly misinterpreted, there is a salutary example in this building. William I and William II, during whose reigns the Zisa was constructed, were apex predators in the most autocratic of the political systems to have been trialled in Europe – including the fascist regimes of the twentieth century, which were bureaucratic in character, and paid some cynical lip-service to the idea of a corporate legislative process. This building was intended as a summer palace, in case the rather more imposing fortification now known as the Palazzo dei Normanni should become uncomfortably warm. Irrespective of the sheer self-serving arrogance that informed these monarchs that they were entitled to such luxuries, they clearly understood that not only did their predecessors know how to live in such a place, but by all accounts, that it was worth keeping them sweet as well. Like the Roman, Ottoman or Austro-Hungarian Empires, they recognised their own self-interest in persuading those they ruled that they also had a stake in this society, and that whatever their ethnolinguistic identity they were first and foremost citizens of the broader polity.

To witness such an attitude to governance reified in the form of architecture is almost too convenient, especially when the architecture in question has endured for nearly a millennium. Like the paths of the garden, the channels of the circulatory network are now laid bare, neither traversed by the traffic they were intended to carry, nor enclosing spaces that in any way resemble those that were inhabited in the castle’s heyday. But the clarity with which these matrices may be seen today makes their example more accessible than had they been concealed behind their seamlessly output environmental services, a cool, green space, a supply of cool water, and a cool, gentle breeze through the deepest recesses of the building. As we saw it, the organising principles of the site are laid bare. With its facade so precisely and completely fusing the formal aesthetics of Norman and Moorish architecture, its rigorous design focus on transient flows, and its extraordinary engineering, the building is a concrete argument for hybridity as the principal constituent of culture. Does anyone seriously believe that a narrow, exclusionary nationalism could ever produce anything remotely as enduring as this?