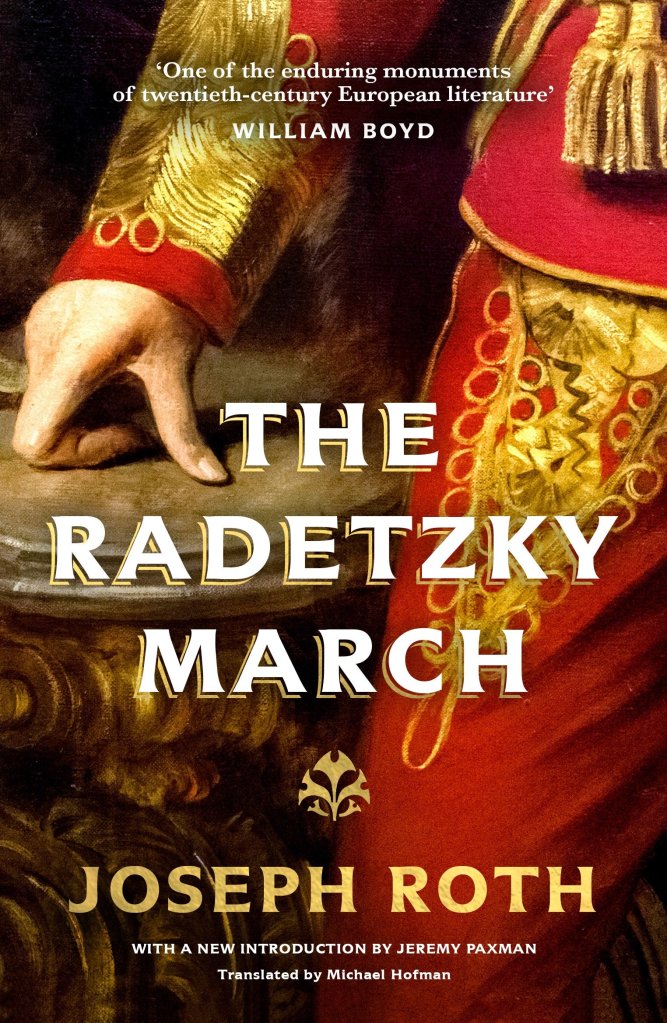 William Boyd thinks that The Radetzky March is ‘one of the enduring monuments of twentieth-century European literature’; I’d never heard of it before a friend recommended it to me. It’s quite likely that Boyd hasn’t heard of the books I think are ‘enduring monuments’ either (although I actually think that sounds like a terrible, dead thing for a book to be), but his assessment suggests that this one has had some degree of influence. I couldn’t find a decent image of the cover of the edition I read – the image I did find is for Granta’s subsequent edition and credits Jeremy Paxman with the introduction, but the edition I read is introduced informatively by the translator, Michael Hofman. He credits Joseph Roth’s survival in cultural memory to other writers, who posthumously recovered him from obscurity in the 1950s, and kept him in print thereafter, while critics, academics and particularly scholarly institutions neglected him (Harvard apparently didn’t think him a sufficiently significant figure to accept his manuscripts when they were offered). He is now regarded as one of the most important modern writers of fiction in German, however, and largely (as far as I can make out) on the basis of this book.

The Radetzky March is set in the final decades of the Austro-Hungarian Empire, a polity into which Roth himself was born. It tells the story of three generations of a middle-class family, one which is ennobled in recognition of the heroism of its founder, a junior military officer and the son of a sergeant of Slovene peasant heritage. Its events and settings are played out in terse and economic language, which nevertheless provides the reader with enough detail to assemble its vanished milieu quite vividly – although Roth may have expected many of his readers to share his background, he seems to have written in the expectation that they would need at least reminding of what had been dissolved by the events of 1914-18. The techniques he uses to do so are exemplary, and would not shame any writer of historical, science- or fantasy fiction, who are likely to have addressed such techniques rather more directly than most authors of ‘literary’ fiction. Roth shows, but is not afraid of telling, which he does in a way which never comes across as any more explicative than his descriptive scene-setting. This is very much of a piece with his presentation of character, which is accomplished largely through the straightforward and simple description of actions, and sometimes of feelings (but only big, life-changing feelings); there is no attempt to write his characters ‘from the inside’ – for which I am grateful. Certain prevalent conventions in the treatment of character in lit-fic have led to the entrenchment of sometimes quite bogus notions of psychology and biography, whose artistic value has been great in particular times and places, but whose horizons have come to enclose and perpetuate ideologies in which middle-class political interests vanish in a haze of ‘enduring value’ and ‘emotional authenticity’. So without wishing to launch into a critique of lit-fic’s role in the production and distribution of cultural capital, it’s worth noting that The Radetzky March offers relatively little comfort to readers who like their prejudices to be confirmed, without being in any overt way a radical or subversive text.

The book is nostalgic, but not in the way that term is usually bandied about; it does not regard the past with the myopically warm Hovis glow of selective memory, but it is suffused with a melancholy homesickness for the irrecuperable circumstances of Roth’s youth. Those circumstances were defined by a multi-national, multi-ethnic, multi-religious state that stretched from Ukraine to Italy, in which, by and large, citizens from any background could advance to the upper echelons of society, and tolerance of diversity was a political necessity. Many of the events in the book depict a growing tension between nationalism and internationalism, or between a patriotism directed at the Dual Monarchy and one informed by ethnic identity. That loyalty to the state, as embodied in the person of Emperor Franz Joseph I, was reinforced by an international administrative and transportation network, and as Roth tells it, it certainly seems that many of the Empire’s citizens felt that they inhabited the entirety of its territory as a single entity. Nationalism, however, was a growing problem throughout Franz Joseph’s long reign, as those less privileged in this system saw their interests as lying with a narrower ethnic identity, which would be better served by independence, and in opposition to the interests of other ethnic or national groups. The parallels with the growing tensions within the contemporary European Union cold hardly be more striking.

The novel concludes with the outbreak of the First World War, but its two symbolic pillars are drawn from the Italian wars of independence. Johann Strauss Sr.’s Radetzky March serves sometimes as a de facto Austrian national anthem (at appearances of the national football team, for example), and was one of the most overtly patriotic pieces of music in the repertoire of the day; it was composed in the year that Franz Joseph came to the throne, in celebration of Field Marshal Joseph Radetzky von Radetz’s victory at the Battle of Custoza, during the First War of Italian Independence, when the tide of nationalist rebellion against Austro-Hungarian rule was seen to have been stemmed. Conversely, the founder of the family whom the novel concerns was ennobled for his heroic action in preserving the Emperor’s life at the Battle of Solferino, during the Second War of Italian Independence. Solferino was a defeat for Austria-Hungary, sometimes seen as marking the turn of the tide in its presence in Italy, and was also the last battle fought in Europe where both armies were under the command of their respective monarchs. The ‘Hero of Solferino’, as the character is often referred to in the novel, serves as an embodiment both of the honourable, principled devotion of the Austro-Hungarian public servant, and of his inevitable irrelevance. The Radetzky March is performed at symbolic moments within the book (any point at which it is performed could hardly be anything but symbolic), deployed to elucidate a counterpoint to the voices of cynicism and nationalism, until the entire discourse collapses with understated pathos into the hell of WWI.

I have to admit I knew almost nothing about the Austro-Hungarian Empire before this book spurred me to do a little digging. It was a state whose institutions must have lingered, in the form of inherited practices and documents, and old signs in railway stations, and dusty memorabilia in attics, in all of the countries that once constituted its territory, through the long grim years of Nazism and Bolshevism, in much the same way that Britain has lingered in India after 1948. Many of its erstwhile citizens, whether they had favoured national independence or not, may well have felt some nostalgia for its tolerant pluralism, particularly those who shared Joseph Roth’s Jewish heritage. The Radetzky March is an unsentimentally elegiac novel; it can also be read as a cautionary tale, and I only hope I will not share Roth’s nostalgia for a vanished internationalism in the years ahead.