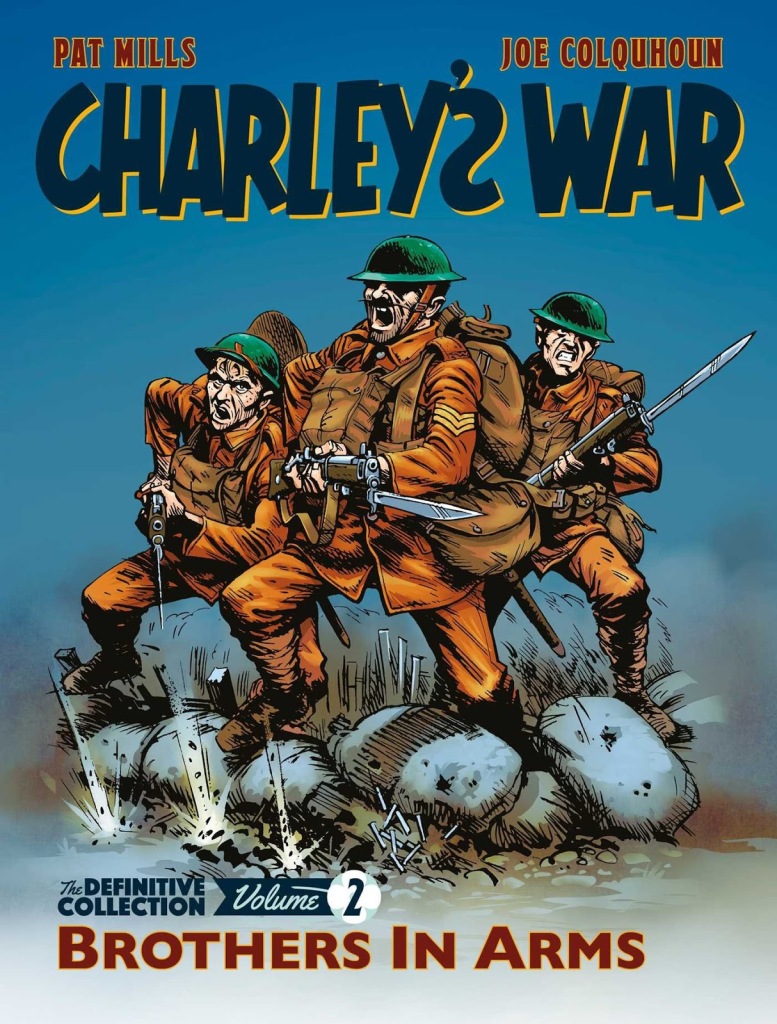 It’s hard to know what to do about something like the Armistice centenary; at a hundred years it’s getting quite hard to bridge the historical distance, although as someone in the region of fifty I certainly knew a few people who lived through the First World War. Reading these beautifully reprinted omnibus editions of Charley’s War turns out to be just the ticket. To honour the millions who died you need to put yourself in their shoes, and although this is not a definitive historical reference, it is brutally, heartbreakingly faithful to a carefully researched and imagined version of the ordinary, working-class Tommy’s experience.

In Brothers In Arms Pat Mills takes the opportunity to cast his net wider, and show a more diverse range of perspectives on the conflict. He is still firmly committed to the ordinary soldier’s experience (barely a page goes by without his contempt for the officer class coming to the fore), but he uses an extended meta-narrative to bear witness to the ordeal of French Foreign Legionaries,  and within that tale the callous deployment of untrained Ethiopian troops to the front lines at Verdun. There is also an increased emphasis on the injustices suffered by soldiers at the hands of officers, training NCOs and the military police, with an extended treatment of the Étaples mutiny, and an even-handed, broadly sympathetic portrayal of those driven to desert. It is worth emphasising how extraordinary it was to find such an attitude in a British children’s war comic in the early 1980s.

Joe Colquhoun’s artwork is breathtaking in this volume. He marries a rigorous, well-researched, illustrative approach to buildings, clothing, vehicles and equipment, with a dynamic and expressive treatment of figures and faces. Colquhoun was a technically superb draftsman, and also a playful cartoonist, able to bring both pathos and humour to his character portrayals. These things do not make a great comics artist, of course, but he was also a master of narrative flow, and although he was an old-school artist, coming of age before a comics creator’s name would be known to their readers, his dynamic and exciting page layouts look as cutting edge as anything being produced at that time by the likes of Mick McMahon or Ian Gibson.

Before I started to read these omnibus editions, and despite my youthful exposure to this strip, I knew Charley’s War mainly by reputation.  It’s becoming quite clear to me that this is one of the outstanding achievements of late twentieth-century British comics, pre-dating and anticipating the 1980s’ first flowering of the comic as a serious art-form.  It is also outstanding as a cultural work in any medium, because the stories it tells, largely drawn from Mills’ extensive research, are little known; I feel that I owe it to these long dead soldiers to bear witness to their suffering, and to the shocking injustices that were heaped upon them.