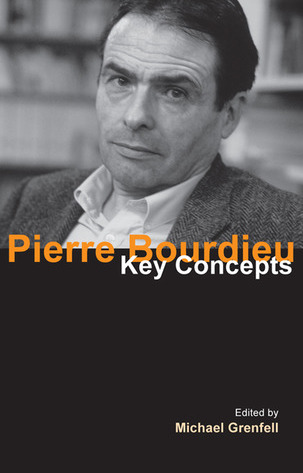 The sociologist and social philosopher Pierre Bourdieu is one of those (many) writers and thinkers to whose ideas I have been exposed, and which I have haltingly deployed, without ever really investigating their work. I have finally got around to doing so, in Bourdieu’s case, by way of preparing to read another book that I know is heavily indebted to his thinking. A general introduction to his thinking, written by academics that know his work inside out, seemed a better bet than simply diving in, so I chose this volume from Routledge’s Key Concepts series, in which thinkers’ ideas are broken down into discrete concepts more easily digested by the neophyte. I like this approach, and might well dip into the series again.

‘Cultural capital’ is a term and an idea I have made some use of, particularly when writing about music; having read this account of the rigorous way in which Bourdieu employed concepts, I’m a little embarrassed that I presumed to sling it around so casually, although it turns out that my use of it was not too far from the mark. Other concepts described in this book, such as field and habitus, have less common currency, but what emerges quite early is that none of them can be readily utilised in isolation. Each constitutes a necessary part of a whole, and in the case of the central terms field and habitus given above, constitute one another. Each concept arises, also, from Bourdieu’s efforts to account for the empirical data of his researches, and was seen by him as a necessary response to specific intellectual conditions – rather than any kind of eternal principle.

I won’t attempt to summarise Bourdieu’s approach to sociology, or social philosophy; it’s probably not possible to do so more concisely than this book does it. But this specificity of his concepts, and their derivation from empirical investigations acts as a striking (and contrasting) example of rigour for the social or cultural theorist. Rather than presenting a theoretical framework through which to view social or cultural phenomena, he analyses his data (often copious, and processed in collaboration with mathematicians), and deploys terms to describe the patterns and relations he finds. So, although he returns repeatedly to the idea of social fields, he doesn’t attempt to establish a taxonomy of such fields, and then relate given phenomena to an enduring idea of ‘the political field’, ‘the economic field’ and so forth. Instead he examines how each field is constituted in the specific circumstances of his encounter with it, and writes of disclosing ‘temporary truths’.

Bourdieu was very clear that sociology is not physics, and that its subject matter is always a moving target. As such, any attempt at the sort of taxonomy he rejected would be essentially metaphysical, and serve only to obscure the empirical reality underlying any study. The difficulty with his approach is that not only does it require extreme intellectual rigour, and very specific attention to self-examination (his concept of reflexivity), but that it necessarily exposes interests and power structures that social groups in hegemonic positions (be they political, economic, academic, or in other social fields) would much prefer were left unexamined. For this reason his work and ideas are probably much identified in Britain and America with that pesky, confusing, French post-modernist critical theory and all its unnecessary long words.

Post-modernism was something that Bourdieu himself used only in a pejorative sense, however, and rather than attempting to supersede a structural or objectivist approach with a post-structural, subjectivist one, his lifelong project (successful as far as I can tell from this one book) was to establish a method for doing social research that was simultaneously subjective and objective, that attended equally to the individual and their social context, without according ontological priority to one or the other. As such, the epistemological implications of his work seem to have relevance far beyond the confines of his own discipline.