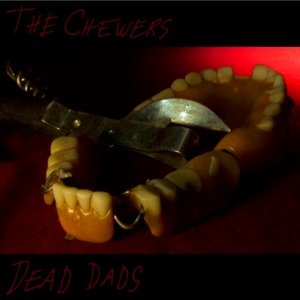 Sections of rock’s avant-garde feel the need to dress themselves in the armour of technical facility, and indeed some of its practitioners are instrumental virtuosi who base their practice on complexity and sophisticated musical structures. Not  The Chewers, who are somewhere to the left of even bands like Sonic Youth or Melvins, in terms of their relationship to the exigencies of performance and their reluctance to trot out any of the conventional significations of rock competence. This is not to say that their music sounds in-competent: it’s in time, it’s in tune, it’s assembled into coherent arrangements, and it sounds as though they’re doing what they set out to do. Their grooves, however, evince a dance-defeating stiff-kneed lockstep, and their lead guitar parts completely eschew the filigreed torrent of potency that has made that instrument’s voice the principal repository for rock’s discourses of the masculine erotic. Their own publicity materials describe it as ‘deadpan, primitive rock’, and although I’d probably prefer the term ‘basic’ to ‘primitive’ as a characterisation of their musical materials, this is a good starting place. They do not seek to elide all traces of expression by any means, but conventional rock music is a tissue of clichés signifying ‘look at me, I’m expressing myself’, and these are ruthlessly excised from The Chewers’ music. There is a creative self here, a musical subjectivity articulated across the hour of music that constitutes Dead Dads, but it is categorically different from that generic rock subject. A self which exists only at the centre of attention, only when it is ‘expressing’ its ‘emotions’, is the everyman of mainstream rock music, but this album presents us with rock’s nobody, the disempowered, the ridiculous, the inadequate, the inept, the invisible. Rock is a music of style and glamour: when the glamour is taken out of it, is there anything left? Dead Dad’s awkward, absurdist songs are, among other things, an answer to that question. This is rock music that speaks of what rock cannot.

Timbrally The Chewers are somewhere in garage rock territory here: the bass is round, the drums are prominent, and the guitars evince a range of distortions that, though they vary in intensity, sound predominantly filthy. The vocal is variously distorted and distant or extremely close to the ear, and the feel, though very idiosyncratic, also seems reminiscent of the more self-aware garage rock’s celebratory thuggishness. There are occasional outbreaks of parping trumpet, there is harmonica in ‘Rot Gut’ and there is organ in ‘Dead Dads’, but for the most part that’s the texture. Most of the riffs, on all instruments, are squarely aligned to the downbeat, and syncopations predominantly occur on the up-beat eighth-notes, giving the music a very jerky, rudimentary feel. There is a degree of sophistication in the way those basic ostinati intersect, however. Lines that would sound very abstract individually weave dependently like the parts of a gamelan – the way the bass bounces off the regular pulse of the guitar chords in ‘(I Wanna Be) Friends With Your Kids’ is a good example, as are the interlocking vocals in ‘Rot Gut’. There is also perhaps even a knowing nod or two to Minimalism – the guitar chords chopping every three eighth notes against the common-time beat of ‘Dig the Pit’ create a cyclical phasing polyrhythm that is reminiscent of the self-generative experiments of the 1960s avant-garde. The aesthetic effect is very different from those possible antecedents however! The impression is not of a group of musicians that have only recently picked up their instruments, so much as of one that has been playing them for a long time and couldn’t care less if that’s not how it’s usually done. There is a long tradition of this sort of thing in underground music, with the likes of Daniel Johnston having been very influential on the mainstream, if indirectly, and an even longer tradition in painting, where the virtues of naïve art have been appreciated since the eighteenth century. I take Dead Dads as being a quite deliberate and sophisticated employment of these creative techniques, offering an implicit critique of conventional approaches – and frequently an explicit satire of them.

So what is this music likely to make you feel? Amused, mainly. ‘Curtains,’ run the lyrics to ‘Curtains’, ‘curtains/ curtains/ curtains/ I’m always thinking about/ curtains.’ Curtains are not an appropriate topic for a rock song, and the conviction with which this piece is delivered serves to emphasise its incongruity. Whatever this song is overtly about, it is also about the limitations of generic cultural practices – curtains can appear in all kinds of representative visual art, so why can’t they be part of the scenery here? Because to cool, leather-clad, macho rock-men, whose identities are limited to a few of the less useful or interesting dimensions of human experience, they are invisible. The Chewers poke holes in that set of assumptions by poking fun at it. ‘Jimmy Does the Shimmy’ questions the valorisation of demi-monde hustling so beloved of rock lyricists from the music’s origins in the blues; ‘Rot Gut’ takes on rock’s love affair with drink and drugs; and ‘Swelling Spasm Frustration’ deconstructs its entitled sexual attitudes. But they do not limit themselves to satirical pastiche. Although their musical practice stays in that general territory, they also address themselves lyrically to more direct critiques: in ‘Politics’ the emptiness of mainstream political practice is exposed, for example, and ‘Dig the Pit’ examines the affective hell of suburban futility. ‘Cyclicism’ addresses itself with more direct sincerity to its topic, and ‘Dead Dads’ appears to be a completely sincere paean to the composers’ deceased fathers: ‘they were cool/ and now they’re dead/ they were alive/ and now they’re dead’. It’s daft and it’s deadpan, but it is also affectionate. This range suggests to me that The Chewers’ project is more ambitious than might at first appear from their humorous no-wave stylings. Rather than simply ripping the piss out of rock’s mainstreams, or celebrating its idiocies, they attempt to find a language in which it can speak of the modes of experience which it usually finds unspeakable – which is to say most modes… They do this without seeking legitimacy in ‘serious-minded’ alternative forms of cultural practice; many prominent underground bands have done that, drawing on the confrontational discourses of contemporary visual art, or at the other extreme on the sophisticated techniques of Classical music or jazz. On Dead Dads we hear two musicians taking on the world of experience on their own terms, armed only with absurdist humour and creative imagination. Whether they succeed is something you should judge for yourself, but they certainly kept me very entertained.