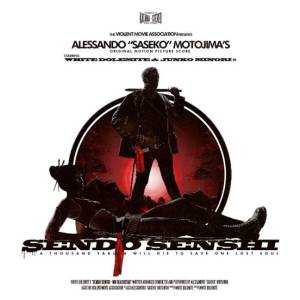 Sendo Senshi is the title of an unreleased 1970s ‘whitexploitation’ movie, both directed and scored by Japanese-Italian Alessandro ‘Saseko’ Motojima. You can watch a trailer for it by clicking the link above; it promises violence, crime, gore, tits, shouting, sartorial intensity and all the garish, cartoonish traits of 1970s grindhouse cinema at its best. This is the kind of thing that inspired Quentin Tarantino in his epiphanous understanding that while style over substance could be amusing, style can also be substance, and be profound. That precise philosophy informs the music on this soundtrack album, with its balanced abstract compositions of gestures and tropes. So, has a print of this legendary lost classic been recently discovered? Has a new edit been cut for imminent arthouse release? No, because all of this is just schtick; this is a fictional framework, which provides a conceptual context for both the composition and the reception of a suite of newly composed music, resembling film music, but actually arranged for a small performing ensemble (with the occasional outbreak of strings). Visual artist Video Mat has been producing mock-up movie posters for some time, using his 1970s action hero alter ego White Dolemite; I don’t know if he’s produced soundtrack albums of this sort in the past, but on this occasion at least he’s gone one better than a poster, and although it’s difficult to unpick the meta-fictional layers, I’m guessing the titular album artist is a real collaborator, rather than another alter-ego. I suppose I could do some digging, but I honestly prefer the obfuscation. It all sounds like a laugh, and so it is, but it’s also a pretext to make some real music using stylistic materials that are freighted with too many associations to be readily exploited in the abstract. The album might have been presented without all of this mythological scaffolding, but its listeners would likely have been too busy constructing the narrative context to attend directly to the music. As it is, we have the visual style and cultural cues laid on, so we know where Motojima is coming from, and it’s easy for us to share in his enthusiasm for the sound of a particular time and place, even if our ears are not specifically that familiar with it.

At the heart of Sendo Senshi is a rhythm section of double bass (played by my college friend Mao Yamada), drums and keyboards (specifically electric piano, clavinet and analogue synth); tightly arranged as the music is (or seems to be), the consistent presence of these specific voices lends the music a coherence it would likely have lacked if every composition had featured different personnel. To what extent the music was written for these players, I can only guess, but they make it their own, interpreting the scoring with a rock solid and very relaxed feel. Flute is prominently featured as a melody voice, and the Kamikaze Horns play a major role in the arrangements; everything else, largely strings, but also including a recurring sound that is either a koto or something masquerading as one, is blamed (on the album sleeve) on the QC197 Orchestra. Given that movie composers are often in a position to throw everything and the kitchen sink at their orchestrations, film scores often lack a pronounced sense of creative continuity, which is fine, obviously, as they serve a purpose separate from their own status as an utterance; however, budgetary considerations used to be a major issue (before the days of Pro-Tools and huge multi-sampled orchestral plug-ins), and the sort of movie that’s represented in this project would likely have sported a tightly focussed soundtrack like the music on this album.

Stylistically, the music apes the pop-jazz sounds of the 1960s and the soundtrack funk of the 70s; the strongest point of resemblance for me, and probably for many listeners, especially if they’re my sort of age, is to the soundtracks of 1970s American TV cop shows. The language of those soundtracks, with their conventional associations of particular musical tropes with particular dramatic ones, such as ‘waiting’, ‘stakeout’, ‘action’ or ‘chase’, is so ingrained in the aural consciousness of anyone who grew up watching that stuff, that the associations seem more natural than conventional. Of course this is the soundtrack to a movie in which a white tough-guy slices people up with a katana in the Japanese urban underworld, and as such it needs other, Far Eastern flavours. Naturally enough, those come not in the form of 1970s Japanese pop-music references but of conventional orientalist clichés. Of course it is entirely possible that this album is, in part, a homage to Japanese interpretations of Western cinematic tropes, but I lack the knowledge to judge, and on balance I doubt it. This music simply and effectively satirises commonplace orientalist representations in Western cinema; the koto (or faux-koto, I’m no expert) makes repeated appearances, and there are frequent outbreaks of the most orientalist trope of all, melody harmonised in fourths around blocky rhythms, in the horns at the start of ‘The Way Is Death’, for example, or on the koto just before the groove kicks off in ‘Meet Me At The Asakusa Shrine’. This convention is an unmistakeable signal in Western music that we are representing someplace to the east of India. Exactly where is immaterial: this is the standard musical signal for the entire Far East.

There is a lot more to this album than pastiche and satire, however. There is some great playing and some very musical scoring. ‘Don’t Mess With Sendo’ features a killer riff shared between the horns and the bass, rolling round a simple blues sequence while Katy Jungman blows a funky, bombastic solo on tenor sax. There are some brilliant tense dissonances, for example in ‘Tokyo Tourai’ and ‘Falling Blossoms’, which if you listen to them in isolation sound decidedly avant-garde, and refer back to the way that modern classical music crept into popular culture in the mid twentieth century. A lot of the orchestration is assembled from riffs, which is very stylistically faithful to the music to which Sendo Senshi is a homage; and there is a close relationship between what happens in the drums and bass and the top lines of the score, which is also characteristic of the era. This was a period in which a popular music rhythm section was being employed by arrangers who probably trained by harmonising Bach chorales, and although they knew their popular styles, and drew a lot from the conventions of dance band arranging that were established in the 1930s, their approach to the ensemble as a whole is in continuity with the history of formal music. That Alessandro ‘Saseko’ Motojima (if he really exists and that’s really his name) nails these characteristics so precisely is what makes this suite of music clearly a homage rather than a pastiche. I know very little about film music, but I’ve studied arranging a bit, and I’ve listened closely to a lot of it (since the most tedious movies often have the best scores); I couldn’t tell you who this album refers to, but I can tell you that it is thoroughly steeped in the tradition whose tropes it employs.

The soundtrack to an action movie needs, principally, two things: tension and kinesis. If you also want (according to the stunted intellects of mass media marketing people) women to watch it, you need some lurve. So Sendo Senshi has, essentially, three affective poles: there is the tense and ominous, the energetic and exciting, and there is the sentimental. This last tendency reaches its apotheosis in the hilarious ‘Izumi’, the album’s one vocal track. Here I think it’s safe to say we’re in the realms of satire; the performance is perfectly judged to sound like an actor singing, with a hokey pop-jazz backing that is immediately redolent of a multitude of attempts by film stars to crack the pop charts with second-rate singles off the back of movies. The performance is in time and in tune, but the delivery is strikingly devoid of any timbral variation, and the phrasing is always exactly on the subdivision; not only this, but the lyrics are beautifully terrible, and carefully calculated to sound as though translated or written by a non-native English speaker (‘my desire and lust causing me to race into your arms’). This extremity is not characteristic of the album, however, and although there are many sentimental melodies (‘Looking For Izumi’ and ‘Seppuku Death Poem’ to pick two at random), there are finer shades of feeling. That’s not really the point of this music however, and what subtleties exist are either relatively minor, or they are formal and compositional subtleties, rather than emotional or narrative ones. This is a composition of bold, primary colours and large cartoonish forms, for all its sophistication in detail. The affective contours of the music are often extremely reminiscent of the dramatic arcs of cinema, and paying some attention to the song titles as you listen is definitely to be recommended. I get the impression that the fictional film which this music is supposed to accompany has been very closely imagined, probably to the extent that the authors of the album could tell you the plot in some detail, were you to put them on the spot. It’s still a serious suite of music however; I mentioned Tarantino’s approach to ‘style as substance’ at the outset, and I think there’s something similar going on here. A gifted composer can take the big blocks of meaning afforded by the prescriptions of a highly conventional genre, and make of them an abstract composition or a collage. So while we respond to the references and the popular culture schtick of Sendo Senshi, which make it a very entertaining piece of work, we can also choose to listen more closely: the music has an enjoyable surface, but in the abstract it has a great deal of textural complexity, and while its ostensible emotional narrative is far from complicated, it is a formally potent artwork. Some very intelligent, erudite writing, realised by some top-flight musicians, makes for an album that, for me, excels on all levels.