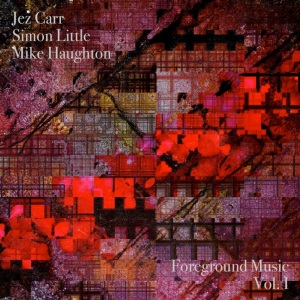 All that Simon Little, who seems to be the member of this trio with principal responsibility for promoting Foreground Music, Vol. I, has to say about this music on his Bandcamp page is that ‘[i]n November 2012, three musicians came together to play freely improvised music and recorded everything.’ Freedom, it should be noted, is a big place, and a statement like that gives little clue as to what the results might sound like. What are the parameters within which the musicians improvised? Is the music consonant, dissonant, tonal, atonal, serial, aleatory, or some combination of these and other approaches? Is it metrical, arrhythmic, calm, frantic or what? Do the musicians concern themselves principally with pitch, timbre, texture, dynamics, discursive phrasing, or other matters? ‘Free improvisation’ is a term that might spring to mind, but it is a term that refers to a specific set of historically and culturally contextualised practices, practices which are not necessarily indicated by Little’s term, ‘freely improvised music’; while free improvisation has been associated with various efforts to transcend formula, including any sense of tonal certainty or diachronic regularity, and often with an aggressively ideological commitment to such efforts as the token of ‘true’ improvisation, there have been many other instances of musicians appearing before an audience or in a recording studio, and beginning to play with no set, prepared material. Keith Jarrett’s solo piano concerts are famous examples of this type, as are three such albums released by his ‘standards trio’ with Gary Peacock and Jack DeJohnette between 1983 and 2001. Dave Holland’s Conference of the Birds (1973) features compositions whose themes are stated, after which the improvisers proceed with complete freedom, rather than reiterating some structural aspect of the composition as a concrete framework for their interpretations. There have been far too many examples of this approach for me to attempt a survey here, and there are far too many fine degrees of variation between the rigidly formulaic and the apparently random for me to suggest any hard and fast definitions. However, I would suggest that Jez Carr, Simon Little and Mike Haughton are operating in an established tradition; both the examples I gave above are artists indelibly associated with the ECM record label, and ‘ecm’ is one of the tags given on the album’s Bandcamp page, so powerfully is ECM linked to a particular sound.

This is consonant, melodic music, where tempo and meter may be contingent, but they are always agreed among the performers; it is, in fact, music that many listeners would not recognise as ‘freely’ improvised. Inasmuch as ‘freely’ can be taken to mean ‘to no set harmonic rhythm’, and this stuff is largely modal, or follows simple cyclical chord patterns, it might be argued that this is not particularly free, so much as it is harmonically simple. Freedom is a fickle quality, however, and agreeing a relatively straightforward palette can leave a performer free to concentrate on more interesting matters than evading tonality or manufacturing novelty. While they are individually concerned with melodic content, and often spell chord changes out clearly in their improvisations, as an ensemble these three musicians are most notably engaged with the terms of their collaboration themselves, in other words with texture, group dynamics and the negotiated extemporisation of formal structures. That’s where this album really sings. When actors improvise, they are usually filling in the detail of a larger narrative, and so with improvising musicians; when musicians jam, there is always a dynamic ebb and flow, but any sense of a long-form dramatic structure is usually a matter for composition. On Foreground Music, Vol. I the players match the achievement of much better-known musicians, like those I mentioned above, by developing themes and dialogues in a way that continually unfolds and extrapolates throughout the course of each improvisation; beyond that, they articulate such a distinctive ensemble voice that continued and coherent discursive themes emerge, are examined, and lead onto others or are revisited, over the length of the album as a whole.

There are three very strong voices at work on this album. Simon Little, whose solo bass live-looping work I have written about extensively, takes up an electric upright bass, although it has a warm, three-dimensional sound that left me initially under the impression that I was listening to the signal from the pickup on an acoustic. Like an acoustic double bass, it has both sonority and presence, but it also has enormous sustain, which Little exploits to great lyrical advantage. As a melodic improviser his performances on this album are the best I’ve heard from him, by a quite striking margin; he was never a slouch in that regard, but neither would I have recommended his work on that basis alone, and there are moments on his solo albums where I feel as though he’s improvising mainly to fill space in the upper register of the arrangement. There is no space-filling whatsoever on this record, from any of the players, and Little has really upped his game as a melodist, producing some sublimely beautiful phrases, with intense, sustained concentration. Mike Haughton’s reeds are equally striking; his voice is extremely consistent across the full range of both instruments (soprano and tenor saxophones), and possesses an emotionally penetrating, keening quality that is not at all brittle, perfectly balanced with breathy depth. He phrases with subtlety and humility, always ready to play silence when silence is called for, and negotiates the relationship between note choice and rhythmic placement as sure-footedly as a tightrope-walker. If Jez Carr’s voice at the piano is any less striking than Little’s or Haughton’s that’s because he has chosen to make it so; there is no grandstanding anywhere on this album, but Carr’s performances are particularly self-effacing, almost always more concerned with making textures, and making connections between the various episodes of each piece, than they are with individuated utterances of melody. If anything though, his is the most complete engagement with the demands of collective improvisation, the most complete immersion of the instrumental voice in the ensemble. He rarely strikes the keys hard, and the attack of his notes is often lost in the texture; when he does step into the foreground, as when he improvises against Little’s ostinato in the second half of ‘VII’, he seems more concerned with how melody evokes a place or a mood than he is with how it articulates personal identity.

Little rolls out some technological tricks in a couple of places; he uses some looping in ‘III’, and the organ-like tones in ‘VII’ sound as though he’s probably responsible for them, although I’m guessing. You wouldn’t know they were there though, unless you were listening specifically with an ear for ‘how did they do that?’ That’s the principal beauty of this record for me; the point of music, or any art really, is not the thing itself, but what it makes you feel, the experience it invokes. That’s what it ‘means’, if anything, and with Foreground Music, Vol. I that meaning is often more prominent than the sound that is its conduit. The trio’s approach is not to elide the individual voice; far from it. This album is replete with self-expression, with sophisticated, discursive elaborations of melodic narrative; but these utterances are not the final repositories of meaning in the work. Instead they intertwine to tell stories, collaborative stories with multiple narrators, but single, unified stories nevertheless. They are affective stories, not denotational ones, and the decision to simply label each improvisation with a Roman numeral was a wise one, avoiding the pre-emption of whatever the sense the listener will make of the music; but they are compelling tales, with all of the drama and complexity we expect from the interactions of multiple, well-drawn characters. When I included this album, very shortly after I first heard it, in my review of 2012, I described it as ‘three quite brilliant musicians collaborating with huge mutual regard and an astonishing slow-burn intensity’. I think that’s a fair summary. To my ear it’s one of the most beautiful recordings I’ve ever been asked to review.