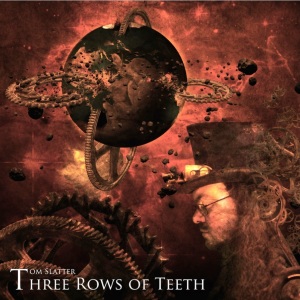 Tom Slatter likes steampunk; he likes it enough to have used it as the thematic touchstone for all three of his albums to date. Now steampunk is not a musical style (Abney Park notwithstanding) but a genre of fiction, and a large body of visual culture derived from it. If you want a watertight definition you’ll have to go and dig one up yourself, but science fiction based on Victorian technology is not a bad shorthand, and Slatter’s brand thereof tends to incorporate a powerful element of the macabre, as well as elements of fantasy. To write and record music that is ‘in’ a literary genre obviously suggests an unusual approach to songwriting; the compositions on Three Rows Of Teeth are not the usual explorations of commonplace situations and experiences, but narrative expositions set in an invented world. This is not to suggest they have any less to say about human experience; indeed, the point of speculative fiction of all kinds is (at its best) to articulate truths and represent experiences that are not well served by mainstream fictional techniques, or so some would argue (including myself, and Michael Moorcock in his excellent introduction to Bryan Talbot’s somewhat steampunk flavoured graphic novel The Adventures Of Luther Arkwright). Slatter then sets himself the challenge of writing music that works effectively as such, and also as fiction; is the steampunk simply window dressing, or does he really engage with the demands of inventing and articulating a consistent fictional world? And to compound the challenge, there is no established practice in ‘steampunk music’, no accepted set of stylistic conventions, so Tom Slatter needs to take his chosen musical materials and convince us that they are an appropriate representation of his chosen speculative milieu, in a way that someone using the blues to tell a tale of whiskey, gambling and sexual betrayal does not. The upside is that he can employ whatever style of music he wants, without anyone telling him that it’s ‘wrong’.

The style of this music is complex, and I wouldn’t want to sum it up too glibly, but it is basically a theatrical and dynamic form of progressive rock; if it weren’t for the fact that Slatter sings all the characters himself it might bear some resemblance to opera, with formal dramatic elements equivalent to the aria, the recitative, the chorus and so on. The instrumental resources are employed with a commensurate degree of drama and textural variety as well, with the texture ranging from a voice and a gentle acoustic guitar to the full throated roar of rock, and the basic elements of a rock rhythm section plus keyboards being employed in various specific combinations to evoke various precisely judged affective meanings. The music is rhythmically sophisticated, both in terms of its use of odd meters, and in Slatter’s capacity to turn a beat around by shifting the pattern of accents; the frequent shifts of dramatic emphasis are facilitated by augmentations and diminutions of the underlying pulse, usually accompanied by a change of texture. Contrasting passages are often connected by complex homorhythmic phrases, and the structures of the songs are rarely predictable. Although the music is predominantly tonal and triadic, the harmony is sequenced with erudition, its shifting or ambiguous key centres and chromatic tensions supporting the narrative thrust of the compositions. The album demonstrates a diverse musical vocabulary, articulated through a nuanced and purposeful compositional grammar.

So how does Slatter turn this complex box of tricks to the task of representing and evoking the world of his narrative? Steampunk, for all its extrapolated technology, its macabre, gaslight horror and its transgressively dysmorphic bodily perversions, is rooted in Victorian social values and conventions, as well as its technical and visual culture. The music on Three Rows Of Teeth, although resembling rock in its textures and its rhythmic language, uses melodic, harmonic and structural materials that strongly signify melodrama, and that take as many stylistic cues from English musical theatre and light opera than from the blues, and the other conventional sources of contemporary rock. The arrangements demonstrate a deep understanding of the problems and opportunities in setting a lyrical text of a linear narrative character; the songs repeat key thematic material, but they are rarely straightforwardly strophic in the simplistically repetitive manner of a pop song. The lyrics deal with themes that will be familiar to habitués of Slatter’s music: an unhealthy obsession with engineering sours a honeymoon; terrifying carnivorous birds bring a hot air balloon crashing to the earth; a man remakes his body as a complex prosthesis of steam driven robotics. Through these and other entertaining tropes Slatter explores issues of the human relationship to technology, the fear of the unknown, superstition and belief, love, alienation and more. There’s something about his use, not only of a fantasy milieu, but its articulation in music, that enables the exploration of some quite bleak themes to seem entertaining, and even amusing.

There is enough distance and irony in Tom Slatter’s perspective to bring even a relatively sceptical listener along for the ride: and although we understand that it’s ‘all just a fantasy’, that very dismissal allows the complex emotional content of the stories and musical compositions to seep into our receptive brains. If we’re going to consent to the entertainment, we may as well go with it, and if we do we’ll find there’s a lot more to it than just some conventional, sentimental pulp fiction with fashionably weird window dressing. Slatter is clearly a technically capable composer and arranger, but he also understands very clearly how fiction operates, as is demonstrated by his humane and unstinting exploration of the emotional and personal consequences of his postulates and speculations. As with all narrative art, there is a level of mediation that makes the aesthetic surface of the work less readily accessible to the listener; as such it is hard to focus on the music’s beauty in the abstract, and the often quite remarkable twists and turns of the arrangements tend to slip by us demurely, seeming ancillary to the main thrust of the plot or exposition. There is a great deal of value in the sounds themselves, however, and I wouldn’t hesitate to recommend this album to somebody who didn’t speak English.

Once again Tom Slatter has produced a piece of work that is as coherent as it is accomplished. To marshall all the resources required to assemble an album of this nature is no mean feat for one individual, requiring as it does the skills of composer, arranger, librettist, and world-builder, a decent singing voice and a high degree of technical facility on four different instruments. I haven’t gone back to listen closely and check my recollections against his earlier releases, but I get the impression that Three Rows Of Teeth is a bit louder and more electric than either of its predecessors, which were more prominently reliant on the acoustic guitar. I would also surmise that there is relatively little narrative connection between these songs, other than the three parts of ‘The Time Traveller Suite’, whereas Ironbark seemed to embody a single narrative; I may well be wrong, but that’s definitely the relative impression the two albums give me. Despite this, the more recent release is, if anything, more coherent as a single artistic statement; there has been a noticeable development in Slatter’s capabilities. There is a confidence in the way he goes about his work, a lightness of touch that comes from long practice. This is high quality stuff, and I found it both entertaining and genuinely moving.