This sophomore EP from The Light That Kills is less granular, more directionally narrative than the debut A Day That We Drift And Fall. This is not to say that it consists of conventional musical phrases arranged according to a nice, accessible formal grammar; that really would be weird, given Scott Crocker’s established experimental proclivities, but there is a far less atemporal approach to the succession of events, and there is a discernible dramatic arc to most of these pieces. There is also a more extended use of recognisable sonic sources, including some protracted free-rock improvisation in ‘Woken By Bells’, ‘Letting Go The Gods’ and particularly, most successfully, ‘New Eden’. This last track is predominantly atonal, and sets out resembling trip-hop, but collapses like a rag doll into an improvisation rich with references to the early jam bands of the late 1960s. Elsewhere there are echoes of the incremental rhythmic discoherence of early minimalism: on ‘Fake Drums & Dead Mice’ a simple piano figure becomes progressively arrhythmic, flamming away until it arrives at a stochastic approximation of Monk jabbing away at the cracks between the keys. The overall effect of New Eden is not one that offers easy handholds, and it certainly presents itself more as atmosphere than discourse, more context than content; but there are stories here, glimmering beneath a surface that is neither gnomic nor obvious, but just is.

Everymen – Two Each His Own (hip-hop)

Getting off to a good start by nabbing what must be one of the best possible names for a duo release, Mykes and Beattrix seem to be primarily focussed on entertainment. This is not to say that they just make a lot of generically phat beats and chat about booty, but that their combination of boom-bap, funk and emotionally engaged life experience is a singularly infectious recipe. The combination of heavy swinging beats and sing-along vocal hooks often insists on the same happy, generous sociality as 90s big-beat; these tunes are not raps with a beat in place to support them, but more of an equal partnership between DJ and MC. Two Each His Own is full of positivity and optimism, but not blindly or naïvely; the lyrics are observational, socially conscious and full of as much love for life’s warts as its obvious rewards. Everymen’s skills are deployed to make their music as contagiously funky as possible in every regard, in beats, flows and overall vibe, full of easy, relaxed energy, and as inviting as anything I’ve heard. They make it sound easy, which it is, but it’s easy only because they’ve put in the many hours of practice required to make their art sound as natural and straightforward as breathing.

The Blue Yellows – All these things right now (folk rock) 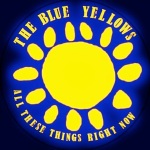 It’s not hard to get The Blue Yellows: they’re not given to any smart-arsed or self-consciously arty behaviour (not that either of those things is invalid, both having produced much good music). What they play is folk-rock of the sort that stormed the British charts in the late 1980s; a music of acoustic guitars, big beats, open spaces, wide vistas and a pronounced but un-histrionic soulfulness. Their songs are passionate, humorous, communal sounding expressions, with an open-door policy that makes them feel strangely like the Everymen tracks reviewed above, for all their ostensible dissimilarities. There is certainly a broad positivity here, although there is also a ready way with caustic irony evinced in ‘Back In The Real World’, and the picture painted in these songs is never black and white. A skilled team on the bass and drums take a subtly unexpected approach, given the material, and impart a relaxed swing to the whole recording, that makes it all the more engaging. ‘Engaging’ is probably the best word I can think of for this outfit: the music is far from revolutionary, and commendably uninterested in fashion, but it’s the sort of warm, funny, committed, finger-snapping, ear-pleasing thing that makes you want to sing along.

The majority of guitarist James Beaudreau’s previous releases (or those he has owned up to) are not exactly ‘easy’; three albums of brilliant avant-garde improvisations and constructions appeared between 2006 and 2011, followed by some other bits and bobs (all lovely), and then a viciously beautiful piece of instrumental rock named for a line from Blake. This last, single tune, nearly a year after the previous release, then over a year of silence, and now, at last, the longed for confirmation that his next album will indeed be in that vein. These two instrumental tunes, purportedly a teaser for the coming full-length, both hinge on Beaudreau’s devastating combination of gut-wrenching melody and burnished, saturated guitar tone. His toolkit is the same one that has been used to confect more mainstream manifestations of roots rock, sonic materials, phraseology and tonal vocabulary all being hewed from well established bedrock; but his ear for phrasing, pacing and emotional narrative are something else altogether. Relatively lengthy instrumental rock pieces like these are usually hung off some kind of self-inflected improvisational or structural complexity, but Beaudreau’s ideas are just so bloody beautiful that they need nothing more than the standard scaffolding of the vocal rock song, and he shows more or less perfect judgement in knowing how long to milk each conceit before dropping it in favour of the next. These two tracks are as good as it gets for me.

Sludge metal has several (at least) major rock traditions running through it: there’s a warped avant-gardism as pioneered by Melvins, a link to the more arty side of hardcore punk, and a distinct Southern flavour (many of its founding icons hailing from Dixie); it’s the last torch that XII Boar carry with the greatest pride, and their sound is essentially what old school heavy rock would have been if the world had been ready for music as hairy as the men who made it. It’s not just Southern boogie with grittier guitars, though: ‘Hellspeed Viper’ has some distinctly thrash fretwork in it early on, and some doom riffery later that would have scared Lynyrd Skynyrd shitless; the vocals deploy blues-rock melody and phrasing via a hoarse, punk roar (with echoes of Lemmy); and the band is generally riding a subterranean sonic zeitgeist that has abandoned the touchstone of ‘professionalism’ (conceived in terms of taste and polish) in favour of exploiting the pure, visceral psychotropia of saturated guitar sounds. In other words, it’s one hell of a loud, offensive, dirty noise, performed with skill and relish, and a lot of fun to listen to. 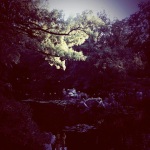 In the field of music, perhaps because it has changed so fast in the last fifty-odd years, terminology becomes rapidly detached from its incipient meanings: thus, ‘popular’ music styles often fit some definition of art music; and similarly, ‘folk’ has become attached to a collection of stylistic features, which are usually found in musical practices that are no more oral, traditional or communal (in fact less so) than those of electronic dance music. SLEEVES then, use a language that derives largely from the literary acoustic practices of the 1950s folk revival, but also appropriates a variety of sounds from rock, pop, and experimental music. It’s a species of art music, and embodies art music’s assumptions regarding creativity, originality and authorship. Most of the music on this release falls uncontroversially into the world of songcraft, and these songs work as songs, irrespective of their presentation; that their presentation warps and manipulates instrumental sound, or expands the soundstage into a dramatic landscape that the band ought to vanish into (though they fill it instead, swelling to metaphorically titanic proportions), is simply a bonus. This is some very creative, atmospheric and captivating music.