The struggle. It’s a recurring theme in conscious hip-hop from the underground (for much the same reason that a lot of mainstream, mass-market hip-hop concerns conspicuous consumption). Life is hard for young people from urban areas, living with no privileges and few prospects; but here’s a form of art whose practice is primarily accessible to the young urban poor. On the one hand it holds out the long shot of global fame and fabulous wealth, and on the other it offers a powerful tool with which to represent exactly who you are and what your life is like; whichever your long term goal may be, the short term experience is one of fighting for the time and resources to pursue it. ‘Struggling to stay above water is sorta humbling/ juggling the nine to five with writing rhymes and press releases/ best believe the pressure never ceases/ and the stress increases’ as Ben Black has it here. For him and his associates on this track, their music represents an elevator, a vehicle for their aspirations, and they turn the conventional usage of the term ‘elevator music’ inside out, with some smooth, charismatic rapping from Black and Super Dertie, a deep, atmospheric beat from Mr. Loop, and a worldview that encompasses Buddhism and classical mythology, as well as the streets where they live. Black always seems to convey the laid back confidence of a man with nothing to prove, for all that his lyrics lay his insecurities out for our perusal. The Lost Letter series, of which this release is a part, is proving to be a very assured and accomplished sounding sequence of tunes, and I enjoyed this one a great deal.

Most metal doesn’t involve a great deal of textural variety. That’s not meant as a criticism, just an observation: the texture is ‘metal’, the dynamic is soft or loud, and any complexities of musical meaning are to be found in manoeuvres constrained by the sonic bounds of the idiom. Telepathy certainly do the ‘metal’ texture; they do it good and loud, brutally heavy, rifftastically kinetic even, but they also have many moments that, taken in isolation, sound like something else. And then, when they’re doing the idiomatic metal sound, they are using complex rhythms, odd times, beat displacements and polyrhythms, that frustrate the obvious response (have you tried headbanging in five?) even as they incite it. Frequently drifting into the louder regions of the post-rock spectrum, this band has an obvious love of texture and orchestration (i.e. the creative use of their instrumental resources in various combinations), and tend to eschew the showing off typical of the more technically demanding end of metal. The material is musically complex, and surely difficult to play, but it’s always an ensemble sound, in which the lead guitar is evicted from its usual pedestal, and becomes a sonic resource like everything else. This music is not about its technical accomplishment or its proponents’ heroic stature (although the playing on this EP is uniformly excellent), but about sound, and the experience of listening to rhythmic structures that refuse to conform to conventional expectations. For all that it’s very clever, it’s also very listenable, with some sweet melodies and some juicy riffs, and it’s more than rich enough in creativity and content that the absence of a vocalist barely registers. Fracture represents an impressive, intelligent and rewarding response to the question of where metal can go, now its basic premises have been explored. 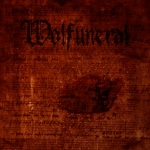 Do not listen to this EP for a bit of a lift on a day when you’re feeling down, and you need something bright to help you through the washing up. Just pass along, and pick something else. Music of this sort has other uses. When you’re in a dark mood and you want to see where the bottom of it might be lurking in the murk, Wolfuneral’s EP would be a good place to turn; or just when you’re in need of a particular dark, heavy atmosphere, of an ineluctable sense that something is about to happen. Perhaps when you want the sense that you share your existence with demons: various moments on this recording, particularly in ‘Where Dead Angels Lie (Dissection)’, reminded me of the soundtrack to Doom II, a virtual world in which I spent many happily addled hours in the first half of my twenties, firing rocket launchers at creatures from the pits of hell. Wolfuneral draws his textures from the Western art tradition (‘classical’ music if you want to be really imprecise about it), but achieves the atmospheric distance of ambience through the repetition of simple motifs. It’s a technique which has currency on the outer fringes of metal, where martial and dark ambient music have been ploughing their ominous furrows for years, largely unnoticed by the mainstream, but making some unlikely connections between extreme metal and modern experimental music. This music is built with generally quite simple, homophonic arrangements, melodies that inhabit a restricted compass, and straightforwardly ominous minor modal harmonies; most of the sounds are (or seem) deliberately artificial, dark church organ and string voices that sometimes sound as though they could have been lifted from an old Bontempi, or (on ‘Dunkelheit (Burzum)’) a guitar sound with the clockwork precision of a harpsichord. Tonal harmony rears its head in the closer, a  reading of Chopin’s Funeral March (Op.35), but otherwise the modalities are deep, placid pools (with unspoken and unseen monsters lurking in their depths). This is a fascinating and absorbingly atmospheric recording.

That Lass can sing all right, with assured intonation and an expressive huskiness that she has the confidence not to overdo; also she performs under one of the best artist names I’ve heard! Here she sings a melancholy refrain to Rick Fury’s spry, skittering linguabatics, from a man comfortable enough with what he does to announce that ‘I talk a lot of rubbish and I’m out like bin bags’. I usually find it impossible to listen to Rick rapping without a big grin on my face, either because of his hilarious turns of phrase, the mad-as-fuck scenarios he outlines, or just the sheer audacious cavorting of his mind and mouth. Here he’s in rapid-fire mode (as he usually is), letting his listeners know that he’s been doing this long enough to do what he wants with it, but warning us that there’s more to him than we’ve seen so far. He stays grounded to touchstones like white cider and cost of a train fare, but now (he says) he buys a ticket because he can’t afford to get caught again. Once he wouldn’t have cared, but he seems like a man with a little more to lose nowadays. DJ Buzzword’s production is low-key and rhythmically restrained, with plenty of space for Rick Fury’s stylings, ideas tripping over each other as though, like John Coltrane, he can’t find the room in a single song to say everything he wants to say. This is quality work. 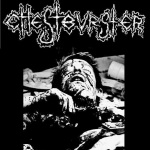 Band names. Some are good, some are bad. Some are deeply meaningful, some were chosen just because they sound cool. Some were agonised over for days or weeks, others plucked casually from the air. Very occasionally, as with Funkadelic or Black Sabbath, they are the perfect literal or metaphorical label for the sound of the band. Chestburster do not, thankfully, literally burst out of your chest and then skitter off to hide in a dark corner until they can grow into a giant human-eating predator; but their sound is so violently intense, and of such concentrated duration, that you find yourself wondering what just happened to you, in much the same way as John Hurt’s character must have done in Alien. Five songs, five minutes. Five minutes of grindcore savagery, stripped down to the minimum: drums, guitar, shouting. Stark staring lunacy, made sonic, and delivered with awesome commitment. I can’t understand the lyrics (does that make me old?) but I really hope they are about horror and intestines. I’m looking forward to seeing this band live, but until I do, I shall put on my headphones and brutalise my psyche regularly with this promo EP.

This sort of thing… no, wait. I hate referring to someone’s heartfelt, handcrafted musical endeavour as some ‘sort of thing’. Change is not a ‘sort of thing’, it’s a thing (or it would be if music could be a thing, or indeed if there were any things at all, but that’s a philosophical digression for another day). What I wanted to say, is that music that superficially sounds like pop, that lacks any particular sense of stylistic excursion or radical agenda, tends to leave me cold. And actually, most of the music that fits that definition is quite adequately served by forms of words as clichéd and generic as its sounds. Most pop music, however, for all that it may be musically sophisticated, lacks the sense of honest joyfulness that Raising Maisie exude. They really are just interested in music and fun, and while that may be construed as a political position in itself, these happy, earnest songs are made with such a strong sense of the particular that it is impossible to write them off as empty or superficial. That sense of particularity is aided and abetted by the unaffected vocal delivery, that eschews the usual strange manoeuvres around accent… The arrangements on Change are more guitar focussed than those on Etc, Etc, their debut album, but they retain the crisp rhythmic feel and the intelligent structures that made that album stand out so noticeably from the majority of pop-rock records. Lovely, engaging melodies, creative arrangements and production, and a totally unmistakeable joy in making this music add up to a pretty engaging combination: these boys can play, they can write, and most of all, they can entertain. Listen to this, and you’ll find yourself wishing you were on whatever Raising Maisie are on.