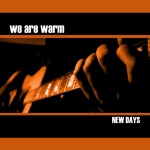 I can just imagine the conversation We Are Warm had at an early rehearsal, going through that abominably tedious process of trying to think of a name: ‘well,’ someone must have said, in a last ditch effort to bring some method to the madness, ‘what sort of band are we? What are we like?’ And so began the enumeration of their characteristics…

They got it right. If my irritating verbosity were brutally limited to a single adjective, ‘warm’ might well be it. Warm melodies, warm chord sequences, really warm vocal harmonies, warm tones on every instrument that makes them sound like they were tracked onto tape through valve pre-amps. It’s basically pretty rootsy rock, that looks back past the beginnings of punk or metal for its musical materials, although it grabs a few subsequent developments to throw into the pot too. Such as soft, saturated distortions, submerged in the mix, that are redolent of shoegaze, without making the overall sound resemble it; in fact the production is predominantly pretty transparent, although it is certainly lush, and, yes, the ‘w’ word.

This sort of thing stands or falls on its melodies, and their interactions with the chords. It all has to be pretty simple, or it won’t work at all, but simplicity can actually demand a more sophisticated musicality, because it’s all about saying a lot with limited resources. I mean sure, the arrangements are lovely, literate, nuanced (and ‘w’) things, but that will only take you so far: are the songs any good? Yes, they’re beautiful. Plus there’s some funky and melodic bass playing that sounds like the sort of licks I play. Double win. Get it.

There seems to be (I’m really bad at staying abreast of styles and genres) a particular sort of German post-punk, which involves clean, bright guitars, grinding, trebly bass, tight, punchy drums, jaggedly angular rhythms and declamatory vocals. I know how annoying it can be when some ignorant reviewer says your band is such-and-such a thing that you really don’t have any interest in, so I’m wary of sticking my neck out too much with this, but I’ve heard several bands that have all the characteristics I described above, and whether or not there’s an actual scene, there’s certainly a sound. It’s a good one too.

Radio Burroughs’ approach, on this release at least, tends toward the more conventionally musical end of that spectrum, with vocals that are gently declamatory enough to permit the use of some harmony parts, and some very haunting, astringent, minor-key harmonic/ melodic materials. The tunes tend to sit on a note and let it voice lead through a succession of chords, in a way that has a particularly poignant effect.

Filler Words. Gesture. takes us to a pretty cold place, a place where communication fails, relationships are unsatisfactory, and people are alienated. Sadly, these are real enough places, and at least partially familiar to most of us. The lyrics turn a pretty unforgiving eye on such things, but not an unsympathetic or cynical one. There is a brutal honesty in these songs that is well matched to the icy beauty of the soundworld. This is a serious, novelistic endeavour, and a very accomplished one, which while not exactly ‘fun’, is a very rewarding listen.

This is the second release from the intriguingly named Altin Village & Mine Records that I’m reviewing in this roundup. I would guess that their bag is the serious/ experimentalist end of alternative rock; Soft Airplane is lighter in tone than Filler Words. Gesture. but it is equally much a work of serious artistic intent. Chad Vangaalen is a multi-instrumentalist recluse (we journalists like to use the term ‘recluse’ to refer to anyone who works at home, and actually works, rather than spending all their time out and about drinking skinny lattes and schmoozing journalists). He basically stays in and makes records, and although his songs are in a particular vein, his arrangements are in all sorts of different veins.

The thing that will probably stick with you the most about Vangaalen is his voice, which is a keening, wavering countertenor, that reminds me distinctly of Neil Young. That’s not a bad place to start to get an idea of what his songs are like either, as they are mostly built on simple triadic harmonies, and feature simple country-rock melodies. They’re good simple harmonies and melodies, mind you, solid and intelligent appeals to a well established aesthetic. And then there are the arrangements, which range from stripped down acoustic, with prominent banjo, to funky electro.

This bloke is not short on imagination. He almost seems to go back to first principles every time he has a song to arrange, and although he uses a limited range of vocabularies, he is unusual in using more than one. He employs all his lexicons in a decidedly open-minded manner, and never sounds as though he’s doing anything for the sake of it, or trying to be clever. And the upshot of all this creativity? Music that surprises you, that mashes up contrasting elements that somehow always sound quite natural together. These are great songs, and they’re beautifully presented.

Haunting, spatial soundscapes, and sweet, heartfelt melodies characterise  this album. That, and brutal, ear-crushing acts of insane aural violence. Always a good combination in my book. It’s like watching a little baby rabbit gamboling sweetly in a verdant woodland, when suddenly a man in a welding mask appears and clubs it into a lifeless jelly with a four pound lumphammer. Which clearly isn’t to everyone’s taste, but on the principle that a wide and dramatic dynamic range is the acme of a good arrangement, may well be the logical extension of ‘Smells like Teen Spirit’. Either way, I’ve always enjoyed the terrifyingly demonic and thuggishly aggressive extremes of rock music.

So, if you normally only listen to ‘nice’ music (whatever that means) you may be surprised to hear me say that this is a polished, slick, even commercial piece of work. Production standards are extremely high, if a little too compressed for my taste; the compositions and arrangements are complex and sophisticated, employing a great variety of textures and narrative devices (for want of a better term); and the performances are impeccable, from the mid range growl/shout vocals (along with the nice singy bits), through the textural and spatial lead guitar work, to the boneshaking piledriver riffing, in which bass, drums and guitar operate with the unified intensity of an army on the move.

I’d be lying if I said I’d never heard anything like this; Of Virtue do not go out of their way to emphasise their idiosyncracies. Nor do they play merry hell with the generic conventions they employ on this album. They just play the music they love, with obvious enthusiasm, and impressive skill. If you are a fan of this genre, I recommend you give them a listen, because they’re pretty much as good as anything out there (fame is never any guarantee of quality, after all.)