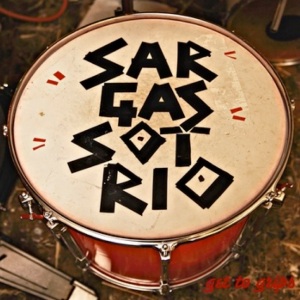 Some songwriters tell it how it is, laying their raw emotion directly on the line with simple language and an impassioned delivery; others burnish their lyrics with so much metaphor and wordplay that we feel an ironic distance from their subjects, irrespective of the ostensible pathos they may describe; some give every impression of writing autobiographically (although as listeners we can never really tell); and others adopt overtly narrative strategies, putting distinct fictional characters into each song.

Sargasso Trio go with the last strategy for the most part, but like the best prose fiction, they use it to tell truths, if not more deeply, then more exactly than it is possible to do by stating things baldly. Words are good at naming objects, but schematic at best with regard to experience: concrete examples are the best way to put flesh on the bones of ‘I felt good’, ‘I felt sad’, ‘I fell in love reluctantly’, ‘it’s a bad idea to get carried away with the sexiness of dancing’ or whatever the hell it is you want to say. The songs on Get To Grips are full of idiosyncratically specific situations, and individuated actors playing out scenes that refuse the glibly inadequate explanations for human behaviour so beloved of many even of the best composers in popular music.

It’s common for songwriters to showcase their carefully crafted lyrics in a way that foregrounds their vocal, and given what I’ve just told you about the songwriting here you might be forgiven for expecting fragile arrangements, built on the tasteful decoration of an acoustic guitar: that’s a strategy that immediately signals to the audience that they should listen, that the meanings of the songs are to be found in the impressions they make on the linguistic centres of the brain. Sargasso Trio is a quartet with other things on its mind, however. They sing their songs of humorous, wry, romantic regret and of convincingly fallible people living through each other, directly to the body. Be advised, this is dance music.

Like their previous album, Burnin’ Burnin’ Burnin’, there is an admixture of acoustic guitars, funky percussion and electronic elements (aside from the vocals, I mean: I’ll get to them later!); but on Get To Grips the balance is shifted, and we don’t hear the guitar until ‘Patterns’, the third tune in, which is followed, as if to make the point, by the delightful fillet of 8-bit bossa that is ‘You’ve Got To Get To Grips With How You Feel Inside’. There is a preponderance of tunes with funky, electronic beats that verge on the heavy: in fact, have you noticed how I’m calling them tunes, after all that talk about songs? There are tracks on here I’ll definitely be dropping next time I DJ at a party.

They throw their stylistic net wherever the fancy takes them, but fancy seems to take Sargasso Trio to the 1970s quite a lot of late: there are some decidedly well integrated disco influences here. ‘Broken Bones’, a paean to the male narrator’s doctor, has a resolving suspended fourth in the vocal harmony that is lifted straight out of Earth Wind & Fire’s ‘Fantasy’ (in homage, not plagiarism). ‘Demon On Drums’ is a riot of disco exuberance, complete with a lyric set in a nightclub, a funky declamation of ‘damn’ that demon on the drums!/ what does he have to do that for?’, and a juicy analogue lead solo with a nicely tweaked modwheel. And unsurprisingly, it is not a song that takes the obvious route lyrically: rather more surprisingly, it is about ten times as sexy for its eschewal of dance tune clichés.

Get To Grips is absolutely jam packed with humour, even (or even especially) in its moments of deepest pathos; but it is not a humour that is incompatible with seriousness. In fact, it’s an integral part of Sargasso Trio’s representation of the world, just as much as the strong dance rhythms of the arrangements, which tell the listener at least as much about the songs’ meanings as the intelligent and warm hearted lyrics.

This is not a band that’s overly keen on detailed credits, but I think I can guess which one is Emily Siddall (there’s three men and one woman). Other than that, I really couldn’t tell you whether there is more than one male voice that takes lead vocal duties, and although there are vocal harmonies, as this is a studio recording, that doesn’t tell me much about who does what. What I will say, is that the male leads are beautifully sung, with strength and sympathy, and a lightness of touch that only comes with security of intonation. I hope I won’t offend anyone when I say that Siddall’s vocals are the star of the show however. She has a nuanced and agile delivery, precisely controlling the amount of breath she needs to put behind each note; but her technical accomplishment is not accompanied by any sense of distance, which it often is when the voice is honed into an instrument. Her delivery is the delivery of an actor, inhabiting each lyric with an intensity and expression that makes the listener live it with her.

I’ve heard a lot of histrionics and breast-beating in music: many artists find ways to signal that they really mean it, that they are performing with emotional authenticity, even if their material is generic… Sargasso Trio go one better. They really do mean it: they take on the ambitious, complex task of reflecting, responding to and representing experience as they have found it, not as it has been presented to them in a selection of readymade linguistic and musical formulae. They rise to the challenge without rupturing the expectations and conventions of any of the styles of music against which they brush, yet their stylistic location is, as with much of the best music, impossible to determine with certainty. This is truly, fundamentally soulful, generous, emotionally literate, and musically accomplished work.