$free to active members of The GaragePunk Hideout 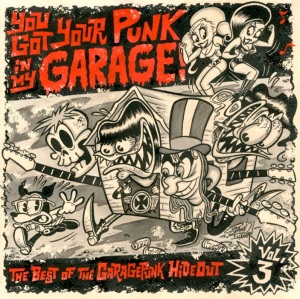 This album is for sale through all the usual big online retailers, but it’s also available as a freebie to active members of the garage music fan community linked to above. It’s the third in an ongoing series, and let me tell you: if you are a fan of this kind of music it is an amazing bonus (since the GaragePunk Hideout is a superb site/ network anyway). Personally I’d be very happy to pay for this; hell, I’d pay just for the album artwork!

Music featured in the series has ranged from very 1960s flavoured, jangly stuff, to thrashy, punky noise, right back to rock’n’roll and  psychobilly horrorshow material. I can’t comment on how this series is curated, but I know there’s an element of open submission, as well as some active collecting, and what amazes me (what always amazes me about music these days) is the sheer number and variety of truly highly quality acts.

I didn’t review the first two installments in this series (partly because I didn’t realise they were available retail) but this is basically just such a brilliant compilation that I needed an excuse to listen to it a few more times than I otherwise would have done. Obviously I want to share it with my readers because I like it, but I’d also like to publicise the site it comes from (which is hosted on Ning, meaning it needs lots of friendly visitors inclined to make small donations to keep it afloat).

Most of the bands on here are un- or little-known, but they all play as though they had a horde of screaming fans egging them on: the sheer energy and commitment collected here is jaw dropping, and I wonder whether it might be an advantage to the compilation format, because it’s hard for a single band to come up with this much material (twenty-two tracks) without any filler.

An essential part of the garage sound is a certain lo-fi quality to the recordings, but it’s not something that’s easy to achieve: there’s a specific range of guitar tones that signal you’re in garage territory, and they’re mostly familiar to a wide audience, from 1960s bands like The Animals, The Troggs or The Kingsmen. The recording quality is not something you can cop by just using cheap equipment, however: it sounds to me like there’s an element of tape distortion to it, and many of the recordings on this comp have that warmly saturated sound to them, however they achieved it. In other words, this is music that is calculated to sound as though it was thrown carelessly together, but in fact it takes a good deal of care and understanding to make.

Standout tracks for me include ‘Hungry Teenage Wolfman’ by The Bama Lamas, ‘British Swingers’ by The Parents, ‘Just Because Of You’ by Chuck Violence And His One Man Band and ‘Costa Rica Carnage’ by The Archers; there’s not one dud on here however. For twenty-two high energy, perfectly crafted, raw and raucous garage punk tunes, free is an extremely keen price. You owe it to yourself to head over to the GaragePunk Hideout and get involved.