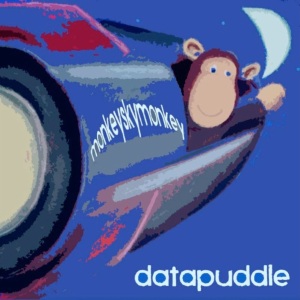 This is an entertaining and individualistic album, that makes you laugh one minute, with its absurdist, science-fiction tinged humour, and then, while your mouth is still open, slaps you with something altogether less superficial. This is music with something to say, and it says it without going to either extreme, of ramming it down your throat with bespoke dissonances, or of speaking in clichés.

datapuddle is a collaboration between stevepuddle and lextrical, whose Deletia I have recently reviewed: all those lower case names! I think we should all pay a decent whack for this album so they can afford to buy themselves some capital letters. I don’t know what stevepuddle sounds like when left to his own devices (due mainly to journalistic laziness), but there’s a strong similarity between this music and the sounds to be found on Deletia. [There are also, I have subsequently discovered from their Facebook group, two other members, but the band’s general internet presence is a bit on the enigmatic side].

Where the two albums part company is in this recording’s pronounced emphasis on the song, rather than the ‘tune’ or ‘piece of music’, as its principal artistic form; and the balance between its electronic and electro-acoustic elements is shifted distinctly in favour of the latter.

If you were to take the guitars, bass and percussion, and accompany these songs with those elements alone, you’d still have a mighty fine album. This is some very strong songwriting, which achieves a lightness of touch, and a deft self-confidence that suggests its authors really aren’t writing for anyone but themselves. Stylistically the writing is not outlandish, and draws a lot on country-rock and Americana: I used the label ‘indie’ in the title for this review in order to indicate that this is rock music, but not of the sort that involves heavy riffs and flying hair. Lyrically its range runs from the humorously off-kilter (such as ‘don’t buy the brown acid/ don’t talk until she’s had it’ from ‘Extended Scenes Of Mild Peril’) to the powerful and strangely moving (‘you ain’t no butcher boy/ butcher boy is dead/ I saw his head float away on the river/ river was painted red’ from ‘The Butcher Boy’).

These songs are not accompanied by an unalloyed country-rock instrumentation: those elements are used because they work, but they are situated in a context of constant sonic creativity, which incorporates electronic elements that are sometimes conventional synth voices, and at other times sound effects, found sounds, and crackles. There is also a subtle and inventive processing of the non-electronic sounds throughout. In common with lextrical’s solo work, the whole thing sounds extremely organic, as though all the weird bleeps and squiggles were actually the result of someone being unusually creative with an acoustic guitar.

The only occasion on which datapuddle reminds me much of anyone else is on ‘SloGlo’, where the vocal delivery is a dead ringer for London Calling era Clash. This is unusually original and inventive music, which nails the difficult trick of being so without doing anything stylistically bizarre, or overtly difficult for the listener. There’s actually nothing difficult about this music, for all its creative integrity: it has pretty tunes, engaging lyrics, tight, involving grooves, and spacious, inviting soundscapes. Unless your musical satisfaction is dependent on expensively attired men shouting about how much they enjoy violence, or guitar amplifiers on the verge of losing warp core integrity, it’s hard to imagine you won’t like this.