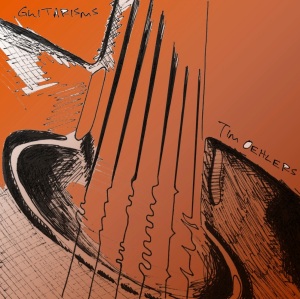 It is a common axiom that you should never judge a book by its cover: I don’t know what Tim Oehlers’ earlier recordings sound like, but the discography page on his website shows the covers of five previous albums, and they all look pretty amateurish. Either represented by sub-professional pencil drawings or slightly dodgy Photoshop work, these recordings are not sold to me effectively. There’s nothing about the way they look that makes me want to hear them; and then there’s Guitarisms.This bold, confidently gestural and slightly glitchy visual design seems to represent in a very appropriate way the sounds it promotes: even the title perfectly evokes the assembly of phrases that the album contains, and with it’s echo of ‘truisms’, its creative intentions, if I read them right. Contrast this with Lucky Brother or Low Profile, as two earlier works are titled, and it seems that in his presentation at least, Oehlers has arrived at a new place of focussed coherence. So while I doubt very much whether the other recordings sound remotely as bad as they look, judging this one by its cover is not a bad thing to do.

All of the recordings on Guitarisms were freely improvised in a single three hour session, and although they have been edited and mastered, there is a great sense of spontaneity and enquiry to them. There is furthermore, and to my mind more importantly, a specificity to them: they represent the impression of this particular (highly individual) musician, in a specific place, at a specific time, and of all the unpredictable aleatory processes that came together in him in that moment. On his MySpace, but, curiously, not on the website linked to above, Oehlers is very clear about his religious convictions, describing himself as a ‘Christian guitarist/composer/recording artist/teacher’: although I don’t share his beliefs, I can certainly hear the spiritual in his work, the sense of music using him as a channel. The idea of the specific and unique human self is important to this album, or at least to my understanding of it, both conceptually and sonically.

‘Free improvisation’, a term Oehlers applies to his own work, is a pretty nebulous term. It has been used to describe a great variety of approaches to music, in which freedom has been sought from a great variety of constraints. It is common for free improvisers to seek freedom from tonality and metronomic time: some have gone to great lengths to avoid the use of any received musical structures, seeing some form of ‘originality’ or novelty as the acme of creativity. Others have simply felt the freedom to depart from tonality or strict tempo when the muse moves them to do so. Yet others have sought to disrupt a received vocabulary with sonic gestures usually considered extramusical, such as scrapes and knocks on their instruments, environmental noises or other interventions.

Tim Oehlers is satisfied mainly to escape the constraints of musical structure, but the building blocks of harmony, melody, rhythm, timbre and an acoustic guitar phraseology (or to put it another way, ‘guitarisms’) are the very things he wants to be free to work with. This makes his album as accessible as it is possible for free improvisation to be, with its combination of a mainly uncontroversial vocabulary and a predominantly gentle and welcoming mood. Some disruptive elements were introduced at the editing stage, in the form of some abrupt and unexpected silences, that stop the musical thought in mid flow for several seconds, before it continues relatively unperturbed. What his intention is with these interventions is ambiguous, but the effect is certainly to provoke thought, and to render the listener’s engagement with the music more serious, because it becomes more difficult. Perhaps he’s asking us to stop letting it all drift by and pay some attention, because easy to listen to as this music may be, it would do it a profound disservice to treat it as easy listening.

The eight pieces collected in Guitarisms consist of statements of simple melody and harmonies that are mainly in a minor and chromatic vein; the vocabulary is hard to define stylistically, although there are occasional elements of blues, but could fall under the broadest rubric of the term ‘folk guitar’. For the most part the rhythms are consistent and ongoing, with rubato passages or tempo changes occurring for clear reasons in relation to the melodic narrative, and although he goes where his ears lead him harmonically, Oehlers eschews any jarringly extreme changes of direction. Indeed, one of the areas he explores throughout is voice leading, an approach that depends on a relatively stable tonal or modal context. There are minor uses of aleatory elements, string noises, environmental sounds and so forth, but this is a player content to restrict himself largely to the mainstream range of the sounds that an acoustic guitar can make. There are, after all, infinite possibilities within a far smaller scope than he employs, and you don’t get any sense that he is banging against the edges or running out of territories to explore.

The willing, sympathetic listener will find that Oehlers does not abuse their trust, but takes them on a journey through a fertile, though far from febrile, melodic and harmonic imagination: this album is a contemplative, pastoral meditation, a courageous artistic endeavour, and a very rewarding, meaningful musical experience. There’s a moment in ‘Feace’ where Oehlers’ voice rises unbidden in the back of his throat to support his guitar melody, before it dies away again, but once you’ve heard it, you can hear it everywhere. He’s singing out his musical meanings with more than just his guitar, and it is well worth the effort of listening hard enough to hear them.