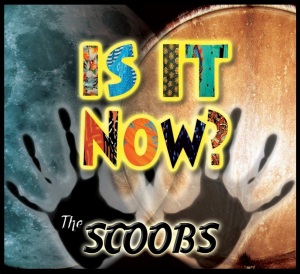 It’s only a few weeks since I reviewed a Scoobs gig, and what they do live is very similar to what’s on this recording. I get the impression that all or most of these tunes have been honed and developed through many years of live performance. Some recorded music is quite legitimately irreproducible live, and some live performances are impossible to capture in a meaningful way on a recording: not this. This is an album of The Scoobs’ excellent, feelgood, groove based songs, performed in the studio with a loose, relaxed feel that comes as close to sounding live as you could reasonably expect.

The grooves are mainly of a mid tempo funk/ soul type, or of a Caribbean slant (bearing in mind that Cuba and Jamaica are both in the Caribbean), although there are some West African vibes in the mix as well. The performances from every band member are relaxed, joyous and right in the pocket, with the whole ensemble operating as a single entity, and even when there’s a vocal, guitar lead or wind part at centre stage it never stands apart on its own. Everything The Scoobs play is directed to their songs, without egos or chops interfering, and every phrase plays its part in supporting the whole thrust of each recording.

There is no pretension in this music, and its ambitions are focussed precisely on making the happiest party groove possible: these musicians are playing well within their not inconsiderable abilities, which is why everything in the arrangements sits so well. There is nothing experimental about the sound, and little sense of boundaries being pushed, but the music is decidedly non-generic, and brings a pretty distinctive combination of stylistic elements together. Proof, if proof was needed, that a unique and creative musical statement does not have to derive from the frantic pursuit of originality or novelty: and in fact, proof is not needed. The Scoobs are in the business of not proving things: their relaxed, unpretentious and almost recreational approach to making music is down in large part to the fact that they don’t have anything to prove. This is not lean, hungry, bleeding edge music, and it’s all the easier to dance to for it.

Is It Now? serves as a compelling advertisement for The Scoobs’ live shows (although those are few and far between), but it’s equally a great stand alone article. If you’re knocking about the house doing stuff, out for a walk with your earbuds in, driving to work, or sat at the computer updating your StumbleFaceTwitSpaceBlog this album provides the perfect mood enhancement; but what it really is, is house party music. Do you remember when parties used to involve whole albums playing on the turntable and people dancing all the way through? These inviting, friendly beats are tailor made for those times, and there’s a few cuts on here (such as ‘The Message’)that will sit nicely in the right kind of DJ set as well. Get this album: you’ll like it.